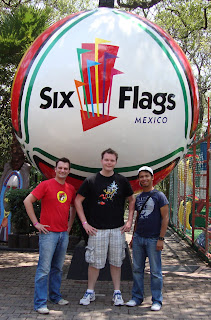 Back in March of 2010, I used Six Flags Over Texas as an analogy for Flag Day.
How ironic, or maybe just appropriate, that our first post ended up being one of a tiny majority to actually have a Six Flags.
TJ and I are theme/amusement park enthusiasts. When we tell people that we visit these parks during vacations abroad, they look at us like we're crazy fools who have wasted precious hours in an exotic locale. Maybe they're right. But for us, it's a day well spent. The food, the attractions, the theming, the costumes...they always give you just a little bit more insight into the country you have found yourself in.
Six Flags Mexico is no exception.
For example, the very first thing we noticed about the park was that, despite the gates opening at 10:00, there was no food or beverage to be found until after 11:00. This speaks to a culture that tends to have late breakfasts, later lunches, and horribly late dinners. Not something we've adjusted to yet, and we totally forgot to grab breakfast on the way. Even Vicente, a native Mexican, was getting a little restless for some yum yums. And if the flock...no, army...of birds that surrounded us as we finally sat down to eat are any indication, we were definitely not alone in our thinking. 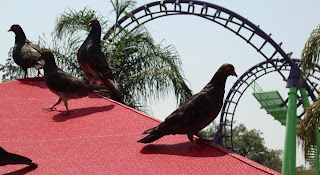 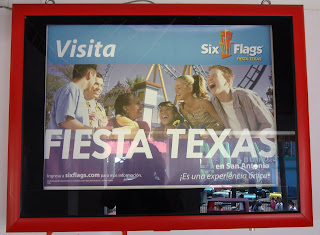 The second thing to strike me was the cross-promotional material for other Six Flags parks. The only sister park to get any mention was Six Flags Fiesta Texas. This particular park is located in San Antonio, which of course is home to a large Latino/Hispanic population. According to the 2006-2008 American Community Survey, the racial composition of the city breaks down as follows:
So, clearly, Six Flags Mexico knows who they cater to.
The third thing that we noticed was that the labor-intensive attractions, such as the Batman Stunt show and the Terminator X, cost extra. Typically, price gauging of this sort is reserved for sky coasters and the like, but it seems to work here. The current General Admission price for Six Flags Over Texas is $36.99, compared to $30.98 for Six Flags Mexico. What this means is that a cheaper ticket price is offered for those that may just wish to bring their families to the park to enjoy the rides and not worry about the loud, violent, potentially scary shows (Note: We cheaped out and didn't pay extra for anything). 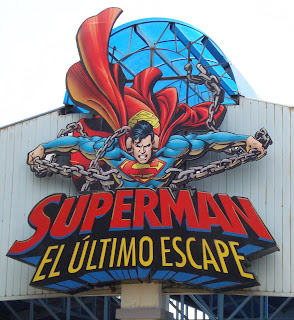 As for the rides, they were pretty much standard Six Flags fair. You have your mandatory Superman and/or Batman ride. There was a gravity house, which I haven't seen since I was a wee lad. There were bad magic and dance performances. There were overpriced carnival games. Overall, it was your typical amusement park experience...which accounts for the fact that we didn't take many pictures that day.
I know, I know. I should be ashamed of myself. But I'm not. I had a lot of fun, despite "almost" starving to death. And I got a nifty Daffy Duck mug and a Flash hoodie, so I'm all set for memories.
But I do want to share one last observation with you. 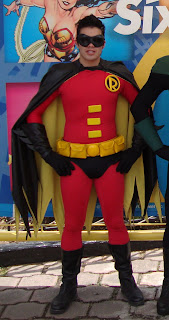 Mexican Robin is smokin' hot.
Posted by Aaron at 8:30 PM