November 2nd found us in Ft. Lauderdale setting sail on the Carnival Miracle for an eight day Eastern Caribbean-bound adventure to the beautiful islands of St. Maarten, St. Lucia, and St. Kitts.
This was only our second cruise, both in our 8+ years together, and our lives in general. We could but hope it would turn out better than our last cruise aboard the Carnival Sensation in October 2008. That four day cruise to the Bahamas saw us visiting the islands of Freeport and Nassau with another couple...a couple that we weren't exactly friends with anymore, but had been very close to at the time of the booking. Eep! (Note: They've since broken up, and one of them is actually quite nice. The other...meh.)

Hi, Florida! Bye, Florida!
You'd think we'd learn a lesson from that. But you'd be wrong. Accompanying us on this voyage was our good friend Antonio, making his first-ever journey outside of Mexico. I'm happy to report that we were all still friends when the boat left, and by the time it returned. Whew! Disaster averted.

I'll post about our various island adventures separately, but for now we'll just talk about life on the boat. And, as any cruiser can attest, life on the boat is best measured by what you've been drinking. Carnival certainly knows this. There's a special drink served each day.

We set sail from Ft. Lauderdale at 4pm on Funship Special (November 2nd). Yellow Bird and Riviera Delight (November 3rd and 4th) were Fun Days at Sea. We spent this time investigating every nook and cranny of the boat. 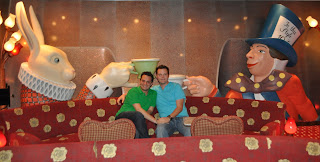 The Mad Hatter's Ball plays host to
much of the ship's entertainment.
That first night presented us with a wonderful song and dance show that introduced us to our entertainment crew and ship mascot Funship Freddy. 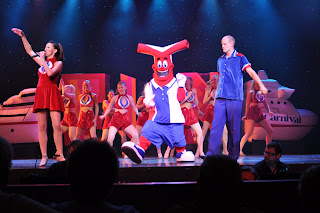 Due to international copyright laws, this is the only show that allowed flash photography. So don't expect more than this, folks!
Well...okay. This isn't a picture from a show, but here's a fancy mullet we had a spectacular view of one evening while awaiting curtain call.

Despite the party in the back, I can assure you
that she was all business in the front.
On the third night, TJ was jonesing for some karaoke. Regular karaoke was delayed, pending the conclusion of a karaoke contest. TJ didn't want to wait and didn't think he'd win, so he entered the contest, singing Livin' La Vida Loca. More on that later. 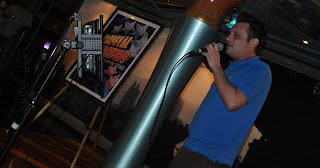 We arrived in St. Maarten early on the morning of Blue Margarita (November 5th). After a day exploring the island we played a round of put-put golf and I won a medal for eating a cookie off of my forehead without using my hands. Obese people of the world, rejoice! 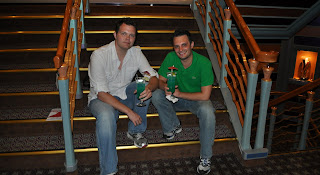 Chillin' on the stoop 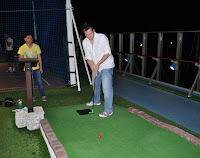 The ball was a hole-in-one. The cookie took two tries.
We had a very interesting day in St Lucia on Goombay Smash (November 6th) in which Antonio learned a very polite, religiously condescending way to tell someone to go f--- themselves. But more on that at another time.

The best day of all was Caribbean Breeze (November 7th) in St Kitts. We booked an AMAZING excursion for this day that I'll talk about...three blogs from now (This is about the boat, people! Focus!). We spent some time that evening hanging out with new friends Susanne and Teresa. These are two amazing women that TJ and I met on Yellow Bird during dinner. Okay, met is a little strong. They tried to talk to us but we were fairly oblivious. Fortunately they were having none of that and accosted us at the bar later. We ended up talking and dancing with them most every night thereafter. We met these California gals as they were enjoying their sixth annual cruise together, a tradition they started when Teresa moved to North Dakota for her husband's work. Oh, and that crazy guy is Malcom, our Cruise Director. Funny at every turn, we were quite pleased to snag a photo with him in his most outrageous outfit.

Two more Fun Days at Sea were had on Ultimate Suntan and Bahama Mama (November 8th and 9th). 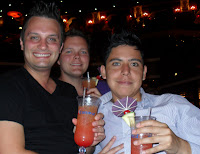 We were pretty worn out by this point, so we took it easy. Light entertainment consisted of a demonstration on how to create the famous Carnival towel animals (which is really just a way of hawking their book...buy yours now!), and a scavenger hunt in which we had to do many ridiculous things in front of large crowds.

...things were clearly taking a turn for the worse, because I have no recollection
as to why I am carrying around an empty can of Boddington's here...
On the final night of the cruise there was a show called "Carnival Legends." This is a show that mixes the ship's talented cast of singers and dancers in with a few of the vacationers that competed in karaoke contests (most likely under the influence of a Drink of the Day) throughout the course of the vacation. That's right folks. Here's where we get to TJ's gross miscalculation on Riviera Delight. I present to you...RICKY MARTIN! 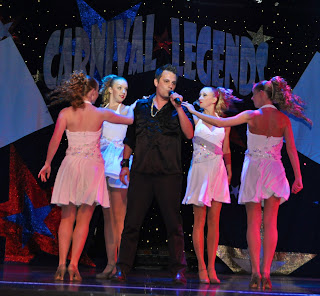 Livin' La Vida Loca...again
We finally made our way back to Ft. Lauderdale on November 10th. Yes, November 10th. There are no drink specials for disembarkment. I guess they don't want to be held responsible for drinking and driving. Or maybe it's because disembarkment is at 8am and no self respecting tourist would be caught drinking before 9. Either way, it was...simply...November 10th. The end of our vacation.
Except for the three fun days in Orlando that followed, of course. But more on that later.
We've still got islands to talk about!
Posted by Aaron at 12:42 PM