It's so hard to believe that it's already been two full months since we returned from our cruise...and even harder to believe that in two months all I've managed to do is blog about said cruise.
That's not to say that it hasn't been a busy, productive, stressful, and incredibly fun two months. Because it has, lack of photographic evidence to the contrary. Well, there are a few photos, so let's pepper them throughout this post so we can get ourselves caught up in time for 2012, shall we?

Upon returning from our vacation we immediately began work on a "Christmas Around the World" exhibit that the consulate had been invited to install at local children's museum Trompo Mágico. The nicest thing I can say about this is that despite many, many, many unforeseen hurdles (many), the project was completed in time for its early December deadline, and looked nice, if not how originally intended (see hurdles).

Speaking of hurdles, On November 20th, we attended the closing ceremonies of the Parapan American Games, which acted as a nice bookend to our attendance of the Pan American Games opening ceremonies on October 14th. It was an unexpected treat, our having only received the tickets last minute to attend as representatives from the consulate. The ceremony was small, yet fortuitously featured many elements of the closing ceremonies for the Pan American Games, which we had only been able to watch on television. Highlights included a parade paying homage to celebrated Mexican artist Sergio Bustamonte, famous for incorporating sun and moon imagery into his work.

We invited some friends over for Thanksgiving this year. It was important to us that we be able to host a big meal because we hadn't had the opportunity to do so since leaving Orlando in February 2010. Last Thanksgiving we had just arrived in Guadalajara and were graciously invited to share the holiday with a large group of TJ's fellow officers. Now, a full year later, having made extensive efforts to branch out and make local friend, we wanted to share a traditional American Thanksgiving with them. We had a great

turnout, eleven friends in total, none of whom had ever experienced the holiday before. We went all out, preparing turkey, ham, sweet potato casserole (the biggest, most exotic hit), deviled eggs, mac n' cheese, and green bean casserole. We went lazy on dessert and opted to buy pumpkin, pecan, and cherry cheesecake pies from an American run bakery, Jeffrey. Lots of great food and wine were had by all, and we all surely suffered for it at work the following day.
Early December found TJ working with a fellow Entry Level Officer to coordinate and staff a booth for World AIDS Day at a fair being held by several of the HIV/AIDS awareness groups in Guadalajara. These were connections TJ made months earlier while coordinating a film series for LGBT Awareness Month. Prior to these outreach events, these groups had minimal contact with each other, while the existence of some was unknown. It's amazing what this career allows you to accomplish sometimes.
Meanwhile, I was busy organizing a toy and clothing drive that I organized for two worthy causes: a shelter for battered women and children, and a privately run foster home that depends on donations to survive. All told, I was able to collect enough toys to ensure that each of the 40+ kids would have 2-3 new toys each, plus plenty of gently used clothing for the brave women at the shelter, who left their homes quickly to get their children to safety.
In the nine days leading up to Christmas, Catholic and Protestant families in Mexico will host a series of parties called posadas. A posada (Spanish word for Inn) is a party that originated in Spain in which you break piñatas, eat tamales, and reenact, through song, Mary and Joseph's struggle to find lodging on the night of Jesus's birth. Unable to attend any last year due to timing, but very interested in this particular cultural exchange, we were thrilled to find ourselves invited to three such parties this year. One was at a co-workers house, and there were tamales and singing, but no piñatas. One was at a local friend's house, and there were piñatas and singing, but no tamales. Another was at a club, and hosted by one of the groups TJ had worked with during the World AIDS Day outreach. It was your typical holiday party without piñatas, tamales, or singing. This type of party is becoming more common, where you call it a posada simply for taking place in December. Although none of the three featured all of the aspects of a traditional posada, I feel that we gained a very clear image of the holidays in Mexico. 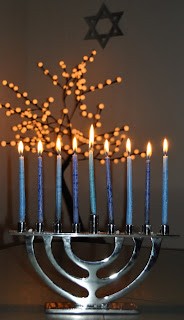 Everyone was so appreciative and responsive to Thanksgiving that we decided to do something similar for Chanukah. But instead of one big party, we wanted to use each of the eight nights to invite a different friend to our dinner table. The first four nights were filled with brisket, latkes, and fried donuts. On the fifth night, we found ourselves hosting a friend whose family lives out of town and had no plans for Christmas. Tired of brisket and fried potatoes, and realizing that for him this was Christmas Eve, we decided to treat him to a traditional holiday meal and whipped up another turkey. But fear not! We spent Christmas Day in the traditional Jewish manner: We grabbed the newest officer to arrive at post and headed to the mall for some P.F. Chang's and a screening of "Mission: Impossible - Ghost Protocol." It probably goes without saying that the rest of the holiday consisted of delicious turkey, stuffing, and cranberry sauce sandwiches. Except the last night, when we returned to Jewish culinary inspiration and took our first ever crack at stuffed cabbage.
All in all, it's been a very busy couple of months. Although it was a little more Christmas-influenced that I would have liked, we have accepted that life abroad will require us to open our minds and hearts to all sorts of local traditions. As for Hanukkah, well, it was definitely better than last year. And I certainly can't complain about the good that we have done (or at least hope we have done) for the community lately.
As a write this, the final day of 2011 is quickly coming to a close. In a few short hours, we will be joined by good friends for light snacks and a couple of drinks before taking a taxi to one of the most popular clubs in the city to ring in the new year.
It's so common to hear people say "I sure hope next year is better."
But you know what? 2011 has been a blessing. I do hope that 2012 is better, but if it's merely equal to 2011, I'll be a happy camper.
Have fun tonight, everyone. And most of all, be safe.
Posted by Aaron at 2:56 PM