Okay. So it has apparently taken me twenty-two months to make it to Number 10 on the Top 20 list. I leave Guadalajara in two months and still have the entire second half of the list to blog about. Yeah. I'll totally finish this. It'll be close, but you can count on it. 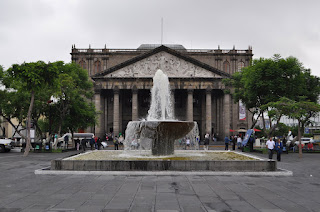 There’s no better topic with which to kick this into overdrive than Teatro Degollado, mentioned briefly in last Sunday's post about the Ballet Folklórico. Originally, I had planned to lump the two together, so I’m actually glad that I waited. That approach wouldn’t have done justice to either topic.

Teatro Degollado (Degollado Theater), located directly across from the Guadalajara Cathedral in Plaza de la Liberación, was born out of Mexico’s theatrical movement of the 1800’s, which brought with it an increased demand for a grand theater in Jalisco’s capitol city. The original 1855 proposal for the theater was that it be named after the classic dramatist Juan Ruiz de Alarcon.Governor José Santos Degollado Sánchez (1811-1861) signed the official construction decree on December 10th, 1855 and laid the first cornerstone in March of the following year.

Governor Pedro Amazon made the decision in November 1861 to change the name to “Teatro Degollado,” in honor of the ex-governor who had initially approved the project. A famed military leader, Degollado had been killed in battle the previous summer. In addition to the theater, a city in the highlands of Jalisco is named in his honor. 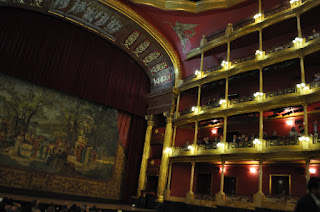 A lengthy war and a change of government resulted in numerous construction delays, but the theater’s first inauguration was finally held on September 13th, 1866. Opera soprano Angela Peralta performed “Lucia di Lammermoor” in a yet-to-be-completed theater. Numerous renovations and four more inaugurations would occur before the theater would be finally be deemed finished.

Today Degollado is considered to be one of the best preserved theaters in Latin American, and numerous renovations have been made throughout the years to improve upon the concert hall’s design by adding murals and sculptures, as well as giving the theater its current gold on red color scheme.

A gilded eagle sits perched on an interior arch directly above the stage, holding a Mexican flag in its talons. In its beak, a chain. Legend tell that the theater will stand until the day the eagle drops the chain. The eagle has stood vigil since the late 1870’s.

The exterior of the building features a mosaic of Apollo and the nine muses, supported by sixteen Corinthian columns. Accompanying the mosaic is the phrase “May we never get the rumor of discord.”

To the rear of the building you will find a beautiful piece of art that commemorates the founding of Guadalajara.

The theater is home to various programs, most famously the Philharmonic Orchestra of Jalisco and the aforementioned Folklore dance troupe from the University of Guadalajara. Last year we took in a rather...unusual showing of a play called “Mariachi con Tequila." I felt deceived by the play, a confusing tale about a mariachi player in love with a woman whose father disapproves, as going into it I thought it was going to be a tequila tasting with local music playing the background. In hindsight, that was a "duh" moment. The tickets were free, though, so I can't complain too terribly much. Of particular note is that nobody in my group, which consisted of semi-fluent Americans and completely fluent Mexicans, understood the plot. Oh, well. Did I mention the Folklore dancing?
Its central location and diverse programming makes Teatro Degollado one of those places that you can't help but stumble across during a visit to Guadalajara's historic El Centro. In reviewing my digital photo albums I am amazed at just how many visits I have made here in comparison to other downtown places of interest.
It's difficult coming to terms with the fact that, some day very soon, I won't be able to wake up Sunday morning and pop in for a show.
Posted by Aaron at 11:35 PM