This past weekend, TJ and I were invited to the beach town known as Sayulita to celebrate the birthday of our friend Mick.
This small but bustling village located in the state of Nayarit was established when families arrived from the mountains of Jalisco to take ownership of the communal land in 1941, but this oceanfront paradise with its lush tropical surroundings wouldn’t become the beach destination it is today until its discovery by wandering surfers in the 1960s, following the construction of Mexican Highway 200. 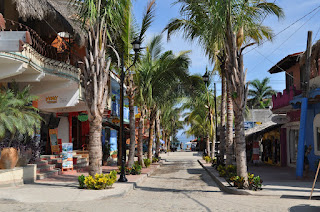 Located a mere 25 miles north of downtown Puerto Vallarta, TJ and I have driven past the turn-off for Sayulita at least a half-dozen times on our way to and from various other adventures, but with less than three months left in Mexico and an invitation for a free stay at a house on the beach, there was no better time than the present to do a little exploring.
When discussing our impending trip with a coworker, he had three things to say about Sayulita: 1) The surfing is good; 2) The fish tacos are amazing; and 3) The smell of marijuana permeates the beach. “Gringos & guanja” is how he referred to this popular American hippie destination. I wasn’t enthused by the drug reference, but the rest sounded pretty good.
In preparation for our Friday morning departure, we decided to start the weekend off right with a relaxing massage on Thursday night followed by a wine & cheese dinner with our friends Sergio and Carlos. It sounded good in theory, but how were we to know that I would somehow manage to suffer the first allergic reaction of my life on the massage table? My eyes and lips swelled to ridiculous proportions thanks to who knows what. Current theories include the almond/ginger extract in the massage oils, some sort of cleaning agent used on the massage table, or perhaps the table itself. I took some Benadryl and hoped that would help. It did, somewhat, but I was feeling far too loopy at that point to engage in conversation and missed the dinner completely. Friday morning saw us departing for Sayulita an hour later than expected, thanks to a pit stop at our friendly neighborhood emergency room for a cortisone shot (Out of Pocket Cost: $80 USD...Mexico has its perks!). Skin tests are expected to take place in the near future.
I slept soundly while TJ made the arduous three-to-four hour drive through the mountains (thanks, hon!) and awoke just as we arrived in Sayulita’s downtown area, feeling refreshed but in need of a shower. We called Mick, who said he would head down from the house to meet us, which gave us twenty minutes to complete a cursory snoop of our surroundings. We discovered that Sayulita is a quaint little town full of delicious looking restaurants, art galleries filled with traditional Mexican sculptures and beadwork, surfboard rentals, and hippies. If the plethora of dreadlocks were any indication, our coworkers assessment of the scene had been correct.

Once Mick arrived, we made the five minute drive up the steep mountainside and learned that our Jeep Compass has more chutzpah than we gave it credit for. We arrived at a gorgeous pink house (dubbed "Casa Paz" by its owner), the highest at this particular vantage point, and were greeted with a beautiful ocean view. We were given a private room with a private bath (which ended up not being so private; an endless herd of people used it throughout our stay) and noticed immediately that there were no windows or doors present. To be clear, there were bolt and screw holes where windows and doors had been, but they were now gone. Curious, but it did allow one to completely absorb the surrounding environs. We settled in and I was pleased to discover that, post-shower, I felt like a million bucks. The swelling was totally gone.

People were milling about, eating tostadas de atún (a new favorite treat, and one that I had never even thought of before), watching a bootleg copy of Madagascar 3 and getting their pre-drink on. We hopped in the infinity pool and splashed around for a while before Cory, the generous homeowner that had offered his space for the festivities, arrived. After dispensing with the appropriate pleasantries, he announced that he wasn’t feeling well and retired for the evening, citing potential food poisoning.

Shortly after sunset, we showered and dressed, then headed back down the mountainside to pick up some refreshments and snacks for the party. We also picked up a can of OFF! Insect Repellent, having noticed that the bugs were a-swarmin’. That trip afforded me my one glimpse of Sayulita nightlife, and I must say I found it lively and inviting.
The party went well enough, with Mick’s family serving up delicious beef and rice burgers, fries, hash browns, and chocolate fondue. My Spanish is still mediocre, but we all understand the universal language of a good drinking game, right? Unfortunately when TJ and I retired for the evening, the party was still in full swing. At this point, not having doors or windows became a bit of a detriment, as there was no way to block out the sounds of drinking games, iPod playlists, and idyll chatter. Oh, and the heat. It got HOT that night.
The next day around 10am we decided to head down to the beach. Of course, Mick wasn’t ready. So we waited for him. Then his friend wasn’t ready. And then the other friend. So around 11:30 we finally arrived at the beach. We all wanted fish tacos, but the fish taco place wasn’t open yet. We settled in for a non-taco brunch at a place called ChocoBanana, a Sayulita landmark famous since 1991 for its chocolate dipped bananas. I was already feeling bitter, wanting a banana and knowing I probably shouldn’t, since they were covered in nuts, which thanks to my newfound allergies may or may not kill me, when our party of seven mutually agreed that we didn’t want a non-taco brunch, and that we would wrap things up with our initial round of beverages and enjoy some beach time while waiting for the taco place to open. That’s when another one of Mick’s friends arrived on the scene and proclaimed that his smart phone had been stolen at last night’s party. TJ and I shot each other a look of alarm, then headed to the car. We let the group know that we would be back just as soon as we had secured our computer and iPad.
It’s an embarrassing thing, having your hosts know that you are guarding your personal items against theft, and also knowing that they are on the suspect list. Still, fool me once, shame on you...and at this point in my time in Mexico, I've already been fooled twice. At this point, Mick’s father asked if we were going back to the beach, and if we would be able to take him. We said yes, we are leaving now, and yes, we can take you. He thanked us and then proceeded to sit down to eat breakfast (For future reference, when somebody says "Ahorita," they can mean anything from "right now" to "shortly after hell freezes over"). Maybe an hour later we were all in the car heading back to the beach. Oh, except for Mick’s father, who decided to go later. Um. Yeah...And to top it off, the taco place still wasn’t open. We were told they would finally open in about twenty minutes, so we headed to the beach.

On a positive note I will say that the weather was comfortably warm, and the water was refreshingly cool. The waves were choppy, but only in that fun, rocking to-and-fro way. There were plenty of swimmers, surfers, and paddleboarders, yet nobody ever appeared to be in anybody else’s way. In other words, nobody cracked their head open on any wooden or fiberglass projectiles.
We finally managed to have our fish tacos, landing at a place called Restaurant Carmelita that had been jumpin’jumpin’ the night before during our soda run. They offered up some excellent chips and salsa, and my Limonada was divine. But they screwed up my food order twice, and when all was said and done, I judged the fish tacos in Guadalajara to be much more enjoyable.
After another dip in the ocean, after which we finally spotted and quickly evaded a pot vendor (he gets credit for originality...he was selling hash donuts), we headed back to the house for a long siesta before sojourning into Vallarta for the evening. Or at least that was the plan.
TJ woke me up at 7:30 and proceeded to do the same for Mick, who had wanted to leave by 8pm. In the time it took me to wake up, shower, and dress, Mick was still picking out his outfit. Finally having accomplished that, he showered and was ready by 8:30. He then asked that we wait while a friend of his got ready. That friend was ready by 9:00. Then he asked if another friend could get ready. Said friend was still in the pool.

TJ and I busied ourselves playing dominoes with Mick’s parents and cousins. I suddenly realized that in my selfish absorption of the surroundings, I had only managed to take pictures of the house, the town, and the beach...but not of the party or the party guests the night before. I tried to rectify that now, and got a couple of pictures snapped...right before the storm hit. 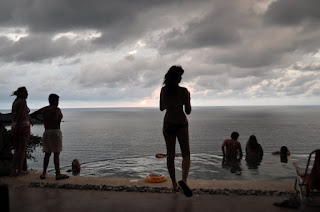 Rain, lighting, torrential winds. Our door- and window-free room was soaked. The roads were slippery...so much so that we could not risk leaving for the evening. There was no food in the house, as such an eventuality had not been prepared for. A half-cup of rice and two tortillas were rationed out to everyone, and that had to suffice until morning. What’s worse, in a situation of this magnitude, is that we were out of booze. And non-alcoholic beverages...but at this point, who wanted THOSE? Had we but left at 8:00 as planned, none of this would have mattered. But for the fourth time this weekend, we had found ourselves waiting for others.
Enough was enough, and TJ and I retired for the evening. With our room soaked, we were graciously given Cory’s room, the only room in the house with windows, doors, and protective screens in case said windows shattered in a storm such as this. You’re probably wondering what became of Cory. So was I. Well, unbeknownst to us, he had been hospitalized during the day. What he had thought of as potential food poisoning was actually Dengue fever. Yeah. Remember my comment about the bugs and the can of OFF! ?
Needless to say, sleep did not come easily or often Saturday night. If I wasn't worried about bug bites, I was worried about breaking windows or mudslides. And even the giant oscillating fan perched on the railing above the bed. It provided a nice breeze, but looked deadly, were it to fall. Yes, I realize that at this point I was simply looking for the next woe-is-me moment. We awoke early and, having packed our bags the night before, departed Sayulita shortly after sunrise.
I feel badly for Mick. He worked really hard to put this party together, and between accusations of theft, monstrous storms, and the very likely clear lack of amusement on my face toward the end, he must have felt that it all somehow fell short.
I won’t say that he’s wrong in that regard, but I am glad for having had the experience. I love exploring new places, even when all doesn’t go according to plan.
And besides, who doesn't enjoy a good old fashioned National Lampoon's style weekend every once in awhile?
Posted by Aaron at 1:55 PM