Since the U.S. found itself in the midst of the second "polar vortex" of 2014 this past week, I thought it might be fun to revisit some photos and memories from mid-December that I never got around to posting here.

As the winter season began, our Hebrew instructor provided us with some weather terminology.  It was cute when she taught us the word for snow, שֶׁלֶג (pronounced "sheleg"), because none of us thought we would be needing it here in Jerusalem.  Sure, it snowed last year, but that had to be a fluke, right?

Wrong.  Beginning the week of December 8th, various news sources began reporting on the probability of snow.  I awoke each morning hoping to find, at minimum, a light dusting of white powder outside my window.  Every morning was fraught with disappointment.  I awoke at 7AM Thursday, December 12th, only to be disappointed once again.

I begrudgingly began the process of getting ready for work at a turtle's pace, a slow process underlined moreso by the speed and efficiency with which TJ awoke and scurried out the door.  By 7:20 he had returned, covered in snow.  I looked outside again, and in the span of twenty minutes, the ground was almost completely covered.  We received a management notice advising of a two hour delay in business operations, but it arrived so late that we knew some folks had to be in transit already.  As we lived within walking distance of work, TJ ran ahead to open the building so that any early arrivals would have a warm place to await further instruction.  I opted for a more lackadaisical course of action and meandered around the neighborhood a bit, capturing the moment for posterity.  I mean, who knew how long it would last? 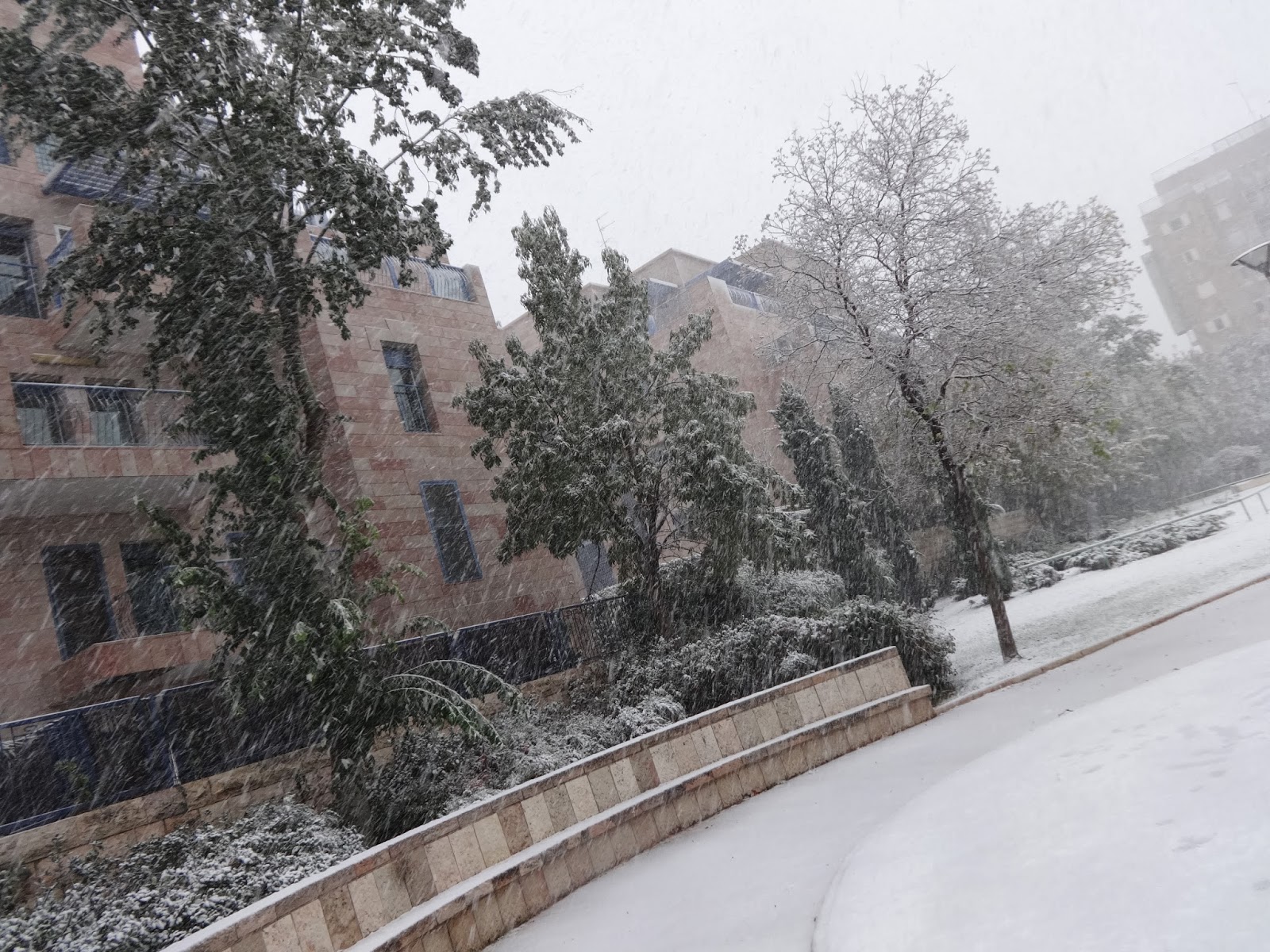 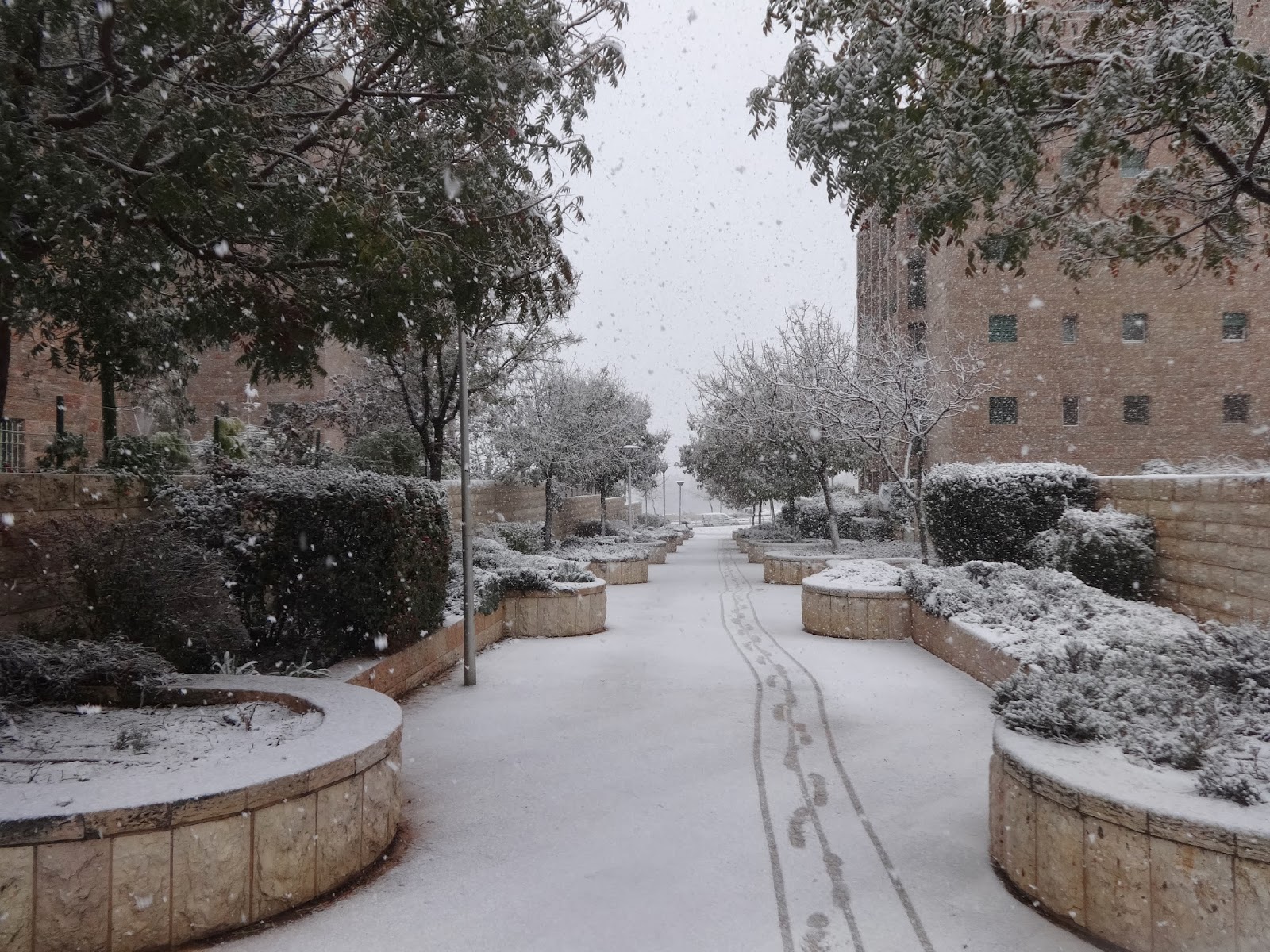 By the time I arrived at the office shortly before 9AM, the answer to that question was obvious:  It would be lasting quite a while.  The wind had kicked up, the snow was falling faster with every passing moment, and the temperature was dropping.  Even so, we were right in assuming that many of our employees had been in transit when the management notice went out:  about half of our local staff, and all but one American, were in the office.  Some of our visa and passport applicants had also decided to brave the elements, which just goes to show that a consular section's work is never done!

Ten o'clock arrived, and instead of a delayed start, it brought news of a full-blown office closure.

While TJ assisted in closing down business operations and assisting the handful of clients in our waiting room, I mad a mad dash for home.  (Okay, okay, I'm not a snow pro.  It was more like a haphazard waddle.)

This wasn't about leaving work as quickly as possible to go enjoy the weather…this was a matter of survival.  You see, Jerusalem shuts down mid-day on Friday for the Jewish observance of the Sabbath.  This means that most grocery stores and restaurants (and certainly all within walking distance to us) are closed before sunset on Friday through after sunset on Saturday.  If inclement weather was going to force businesses to close early on Thursday, we didn't want to find ourselves trapped at home with nothing to eat or drink for, at minimum, 48 hours.  I made it home, hopped in the car, and slowly crept toward the store.  The streets weren't too slippery yet, and there weren't many cars on the road.  Leave it to the government to always release its employees early…it didn't appear that too many people had caught on to the fact that shelegmageddon was approaching.  It made for one of the more pleasant food shopping experiences I've had here.

Safely back at home, I moseyed outside to a nearby park and promptly set to work on a most important task:  Reviving Bernard!  (You knew that was coming, right?) 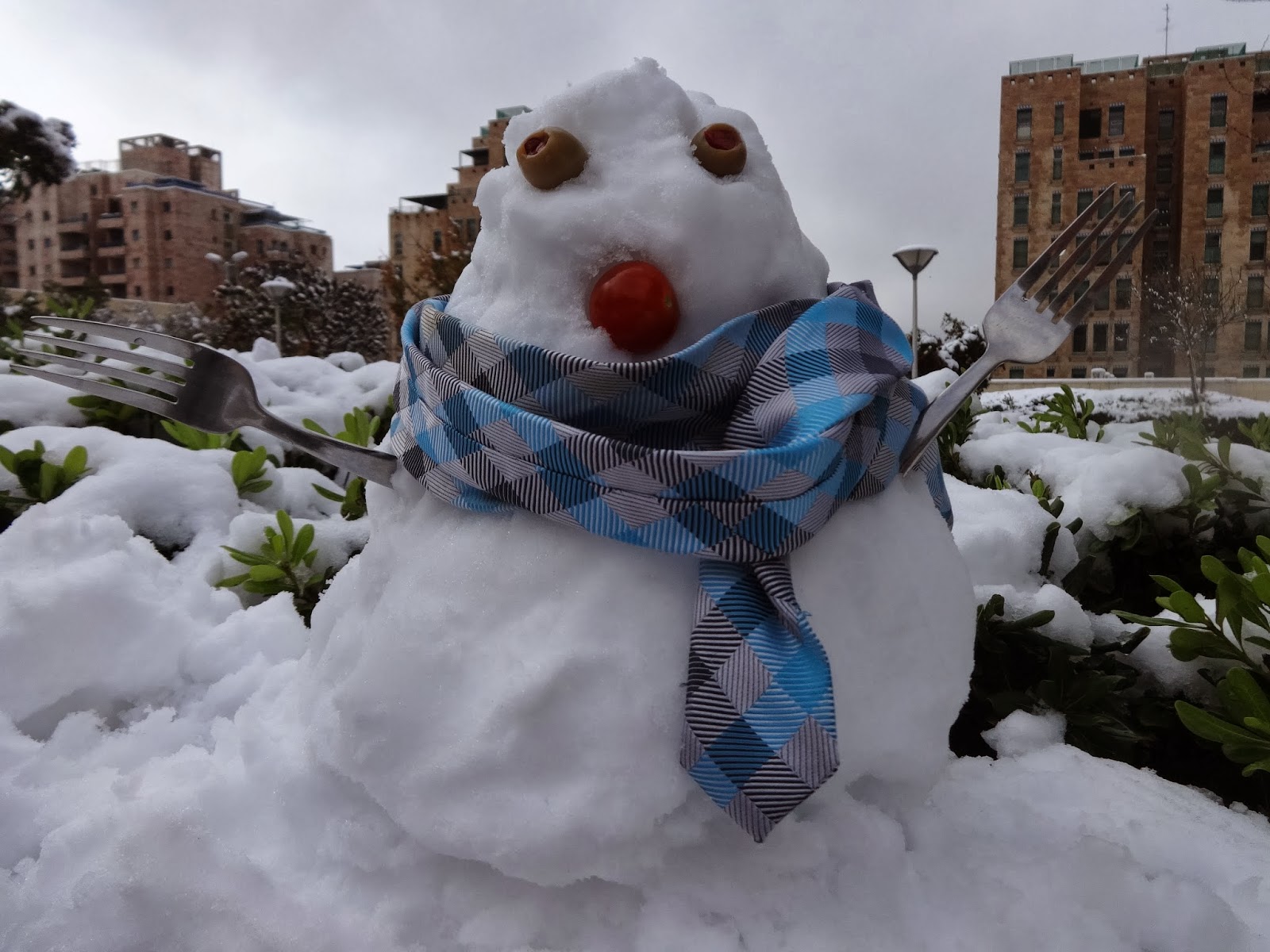 Satisfied with my handiwork (which received the admiration of numerous neighborhood kids and their parents, let me tell you!), I returned home and waited for TJ to return.  Return he did, and it wasn't long before we were out and about, exploring the promenade, which overlooks Jerusalem's Old City.

Due to weather conditions, it wasn't possible to get a clear shot of the Old City in all of its snow-covered glory at the time of our visit to the park, but this panoramic is nice all the same, no?  Here's a great photo from the New York Daily News that has been accredited to Darren Whiteside/Reuters.  A high quality zoom lens would give you a similar shot, albeit from a different angle, from my vantage point on that snowy day. 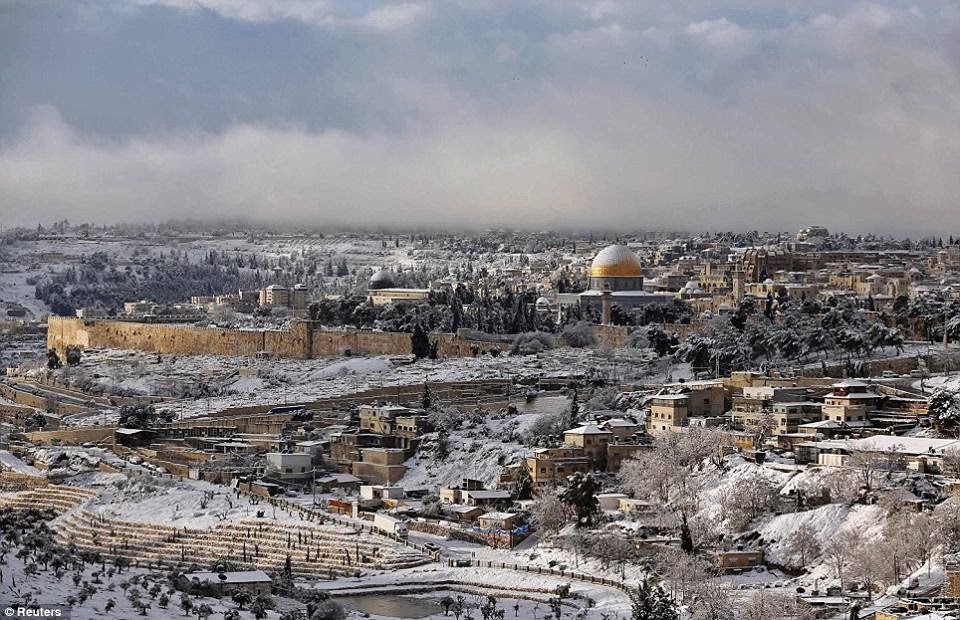 We made jolly in our attempts to pose for pictures, throw snowballs, and make snow angels.  But only for a few minutes.  It was cold.  Very cold.  And wet.  And we Florida boys had not arrived in Jerusalem sufficiently prepared for snow.  Poor Zelda, with her short, thin coat of hair, appeared even less prepared than us! 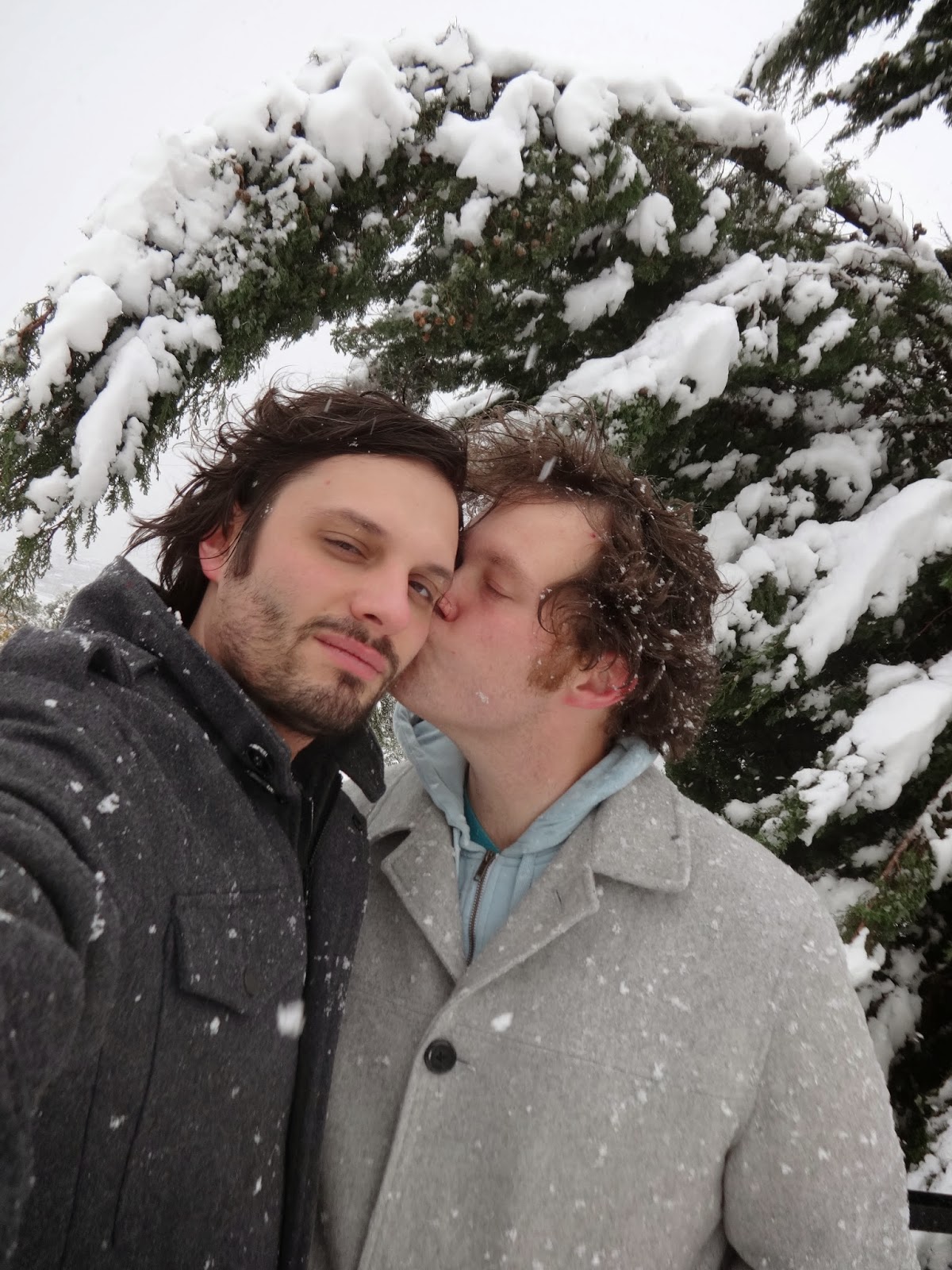 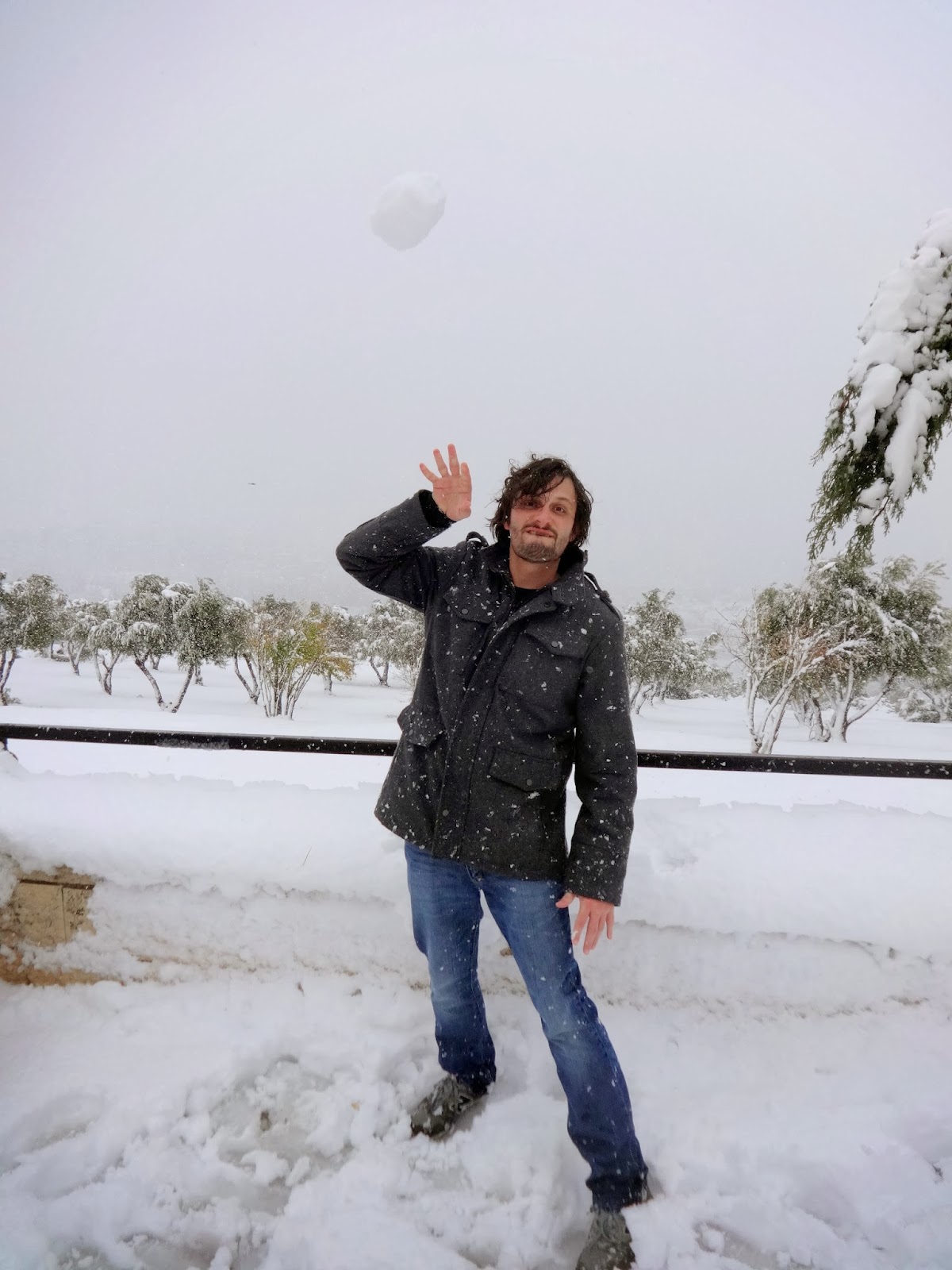 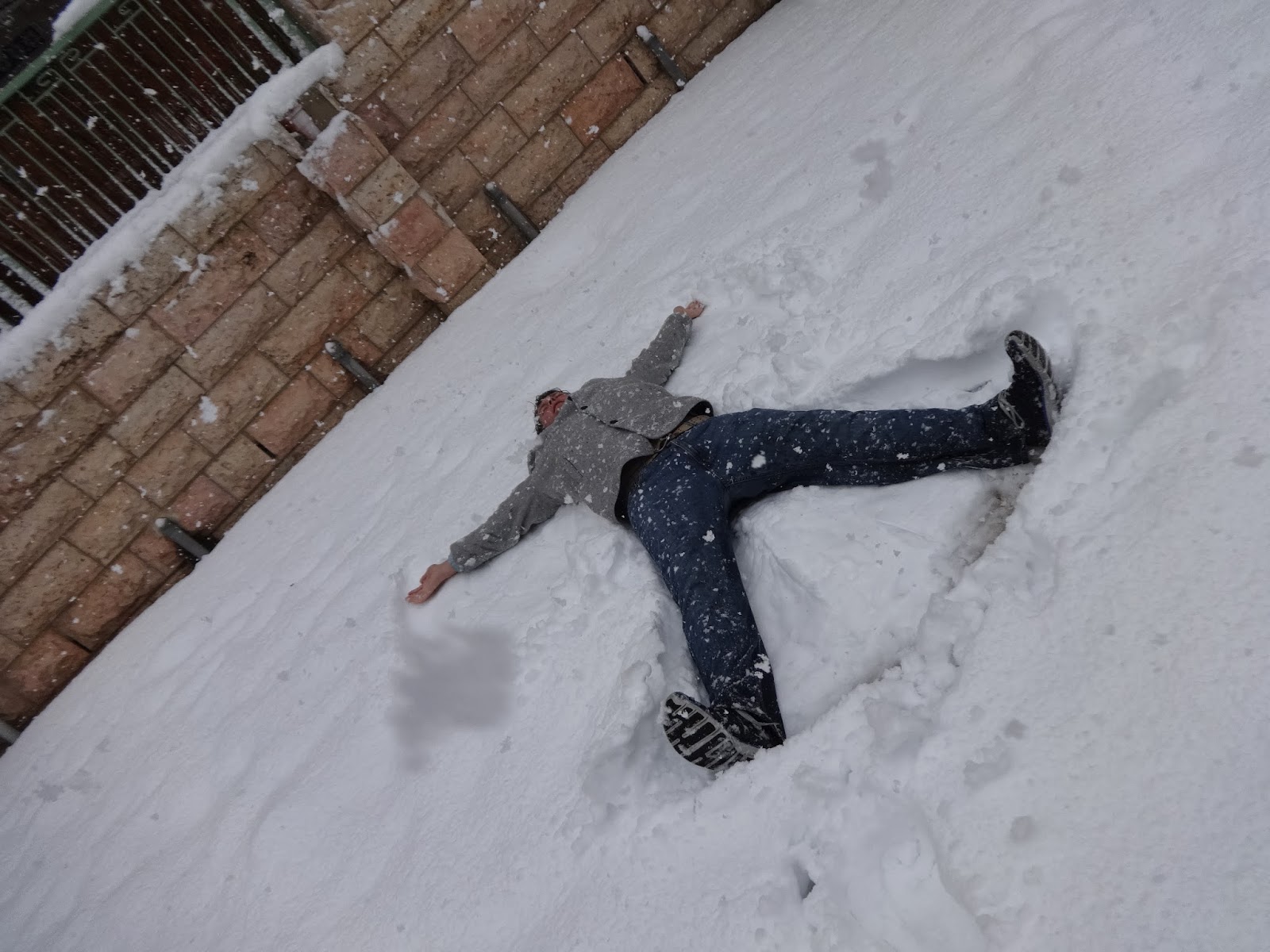 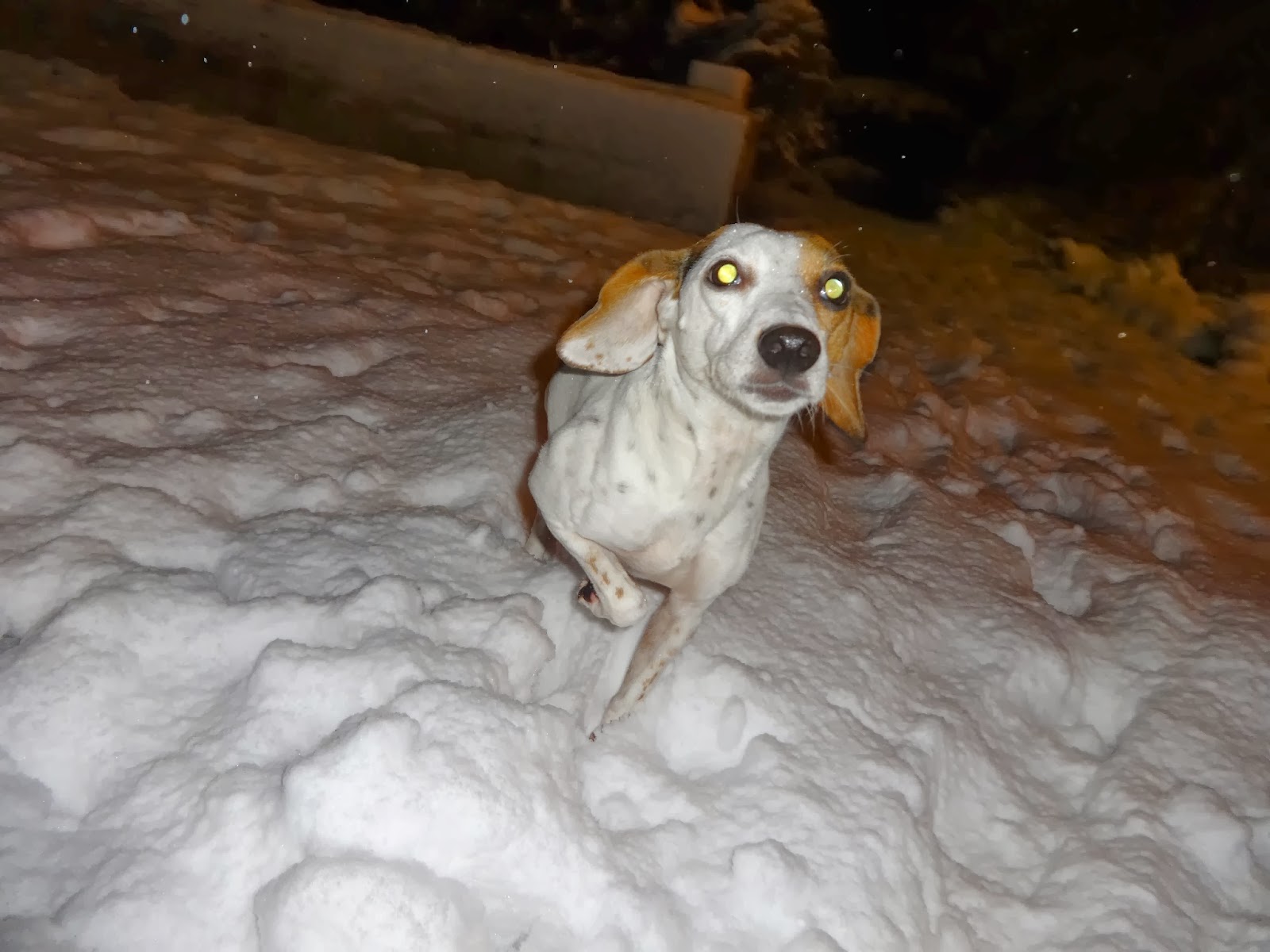 TJ and I have since ordered rain/snow boots, should such an event occur next year.  Zelda didn't order any protective gear, but has expressed desire to just not have it snow anymore, please and thank you.

The snow lasted through Sunday, melting off just enough to resume work bright and early Monday morning…but not enough to prevent me from busting my butt on the way into the office.