Today's topic is something that I quite frankly forgot about in the excitement of chronicling our experiences in Bethlehem, and as I try to wrap my head around January's honeymoon adventures in Europe (no, you haven't missed anything...I'll write about that shortly), I thought this would be the perfect opportunity to step back in time for a moment and revisit a fun day with friends.

After seeing the photos from our November 30th trip to Caesarea, our friend Aviv contacted us and said he wanted to go on a day trip with us as well.  Yehuda, a mutual friend of Aviv's who had joined us in Caesarea, would be coming along again.  Options were discussed, and it was decided that December 21st would be a fine time to visit a couple of small towns near Tel Aviv.

Ramla (רַמְלָה , الرملة) is a predominantly Jewish city in central Israel located 20km southeast of Tel Aviv.  The city also boasts a significant Arab population dating back to the city's founding in the early part of the 8th century by the Umayyad Caliph Suleiman.  In fact, Ramla holds the distinction of being the only city in Israel founded and originally developed by Arabs.

Ramla was the capital of Palestine prior to the arrival of the Crusaders in the 11th century.  Following the 1948 Arab-Israeli War the majority of the city's Arab population were either expelled or fled voluntarily.  The city was repopulated by Jewish immigrants from Asia and North Africa. 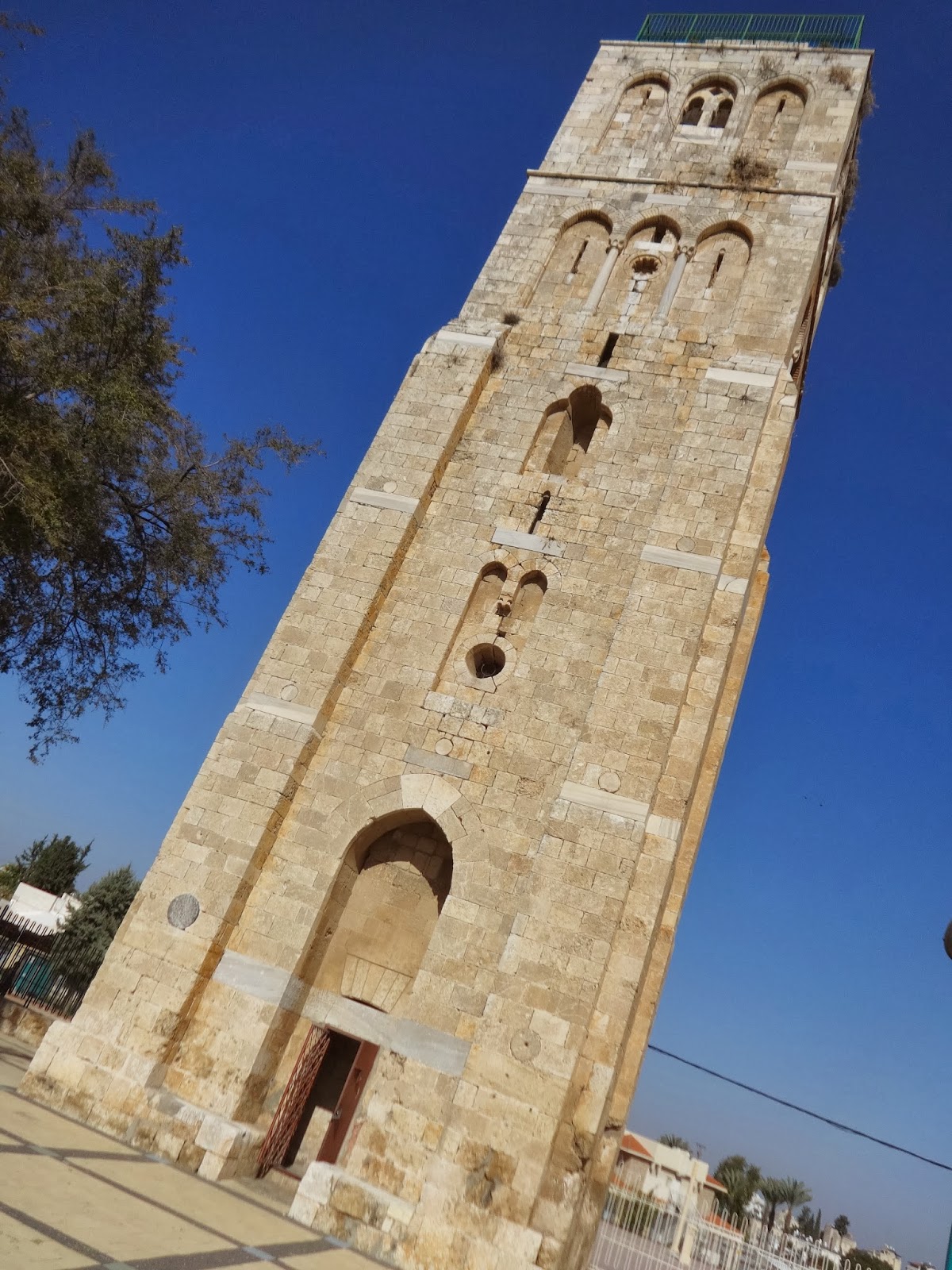 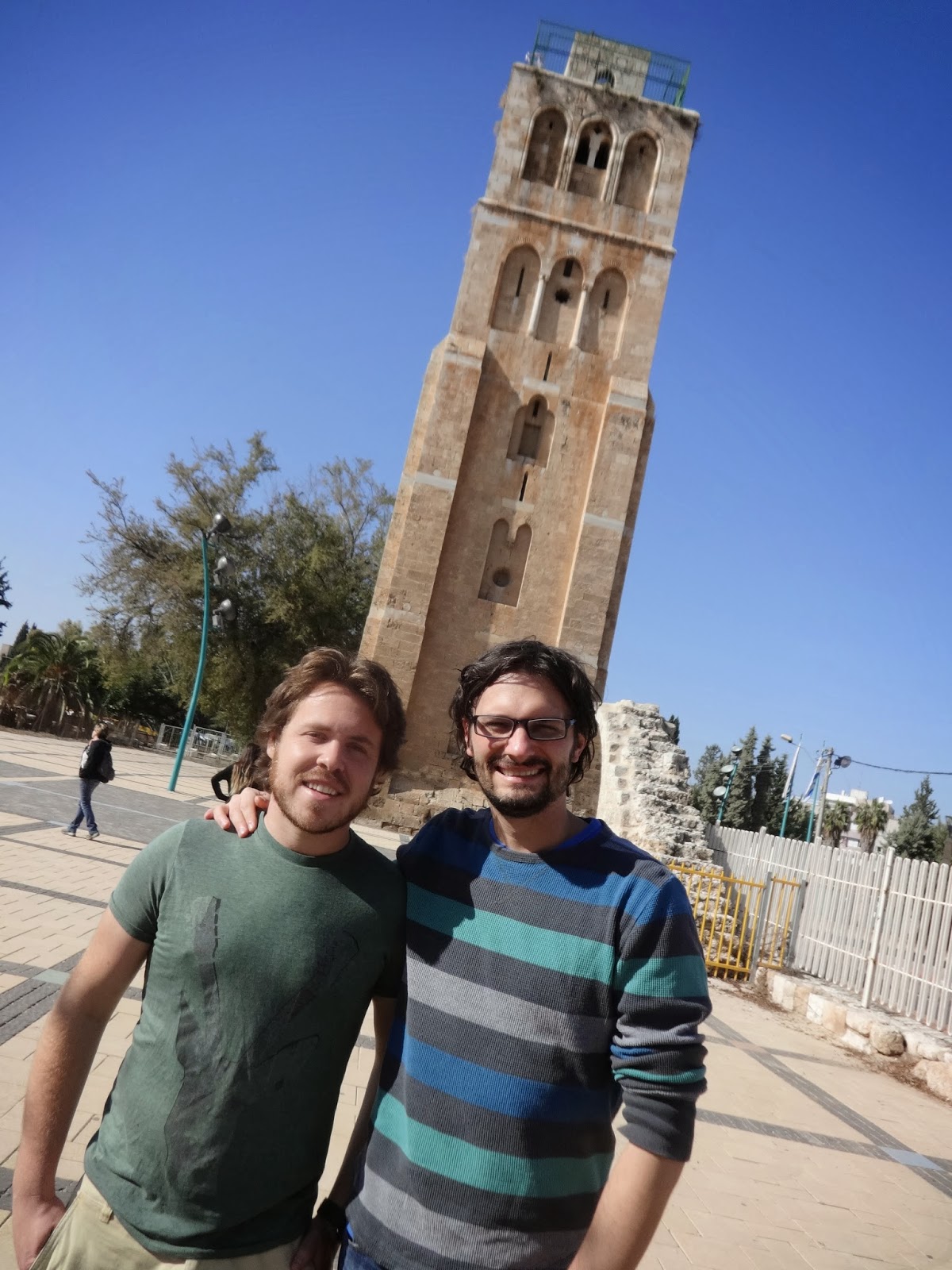 Our first stop of the day was The Tower of Ramla, aka The White Tower, a 13th-or-14th-century minaret that was built as an addition to The White Mosque, itself built in the 8th century by the Caliph Suleiman.  Although scant traces of The White Mosque remain, the six-story minaret stands as a proud reminder of what once was. 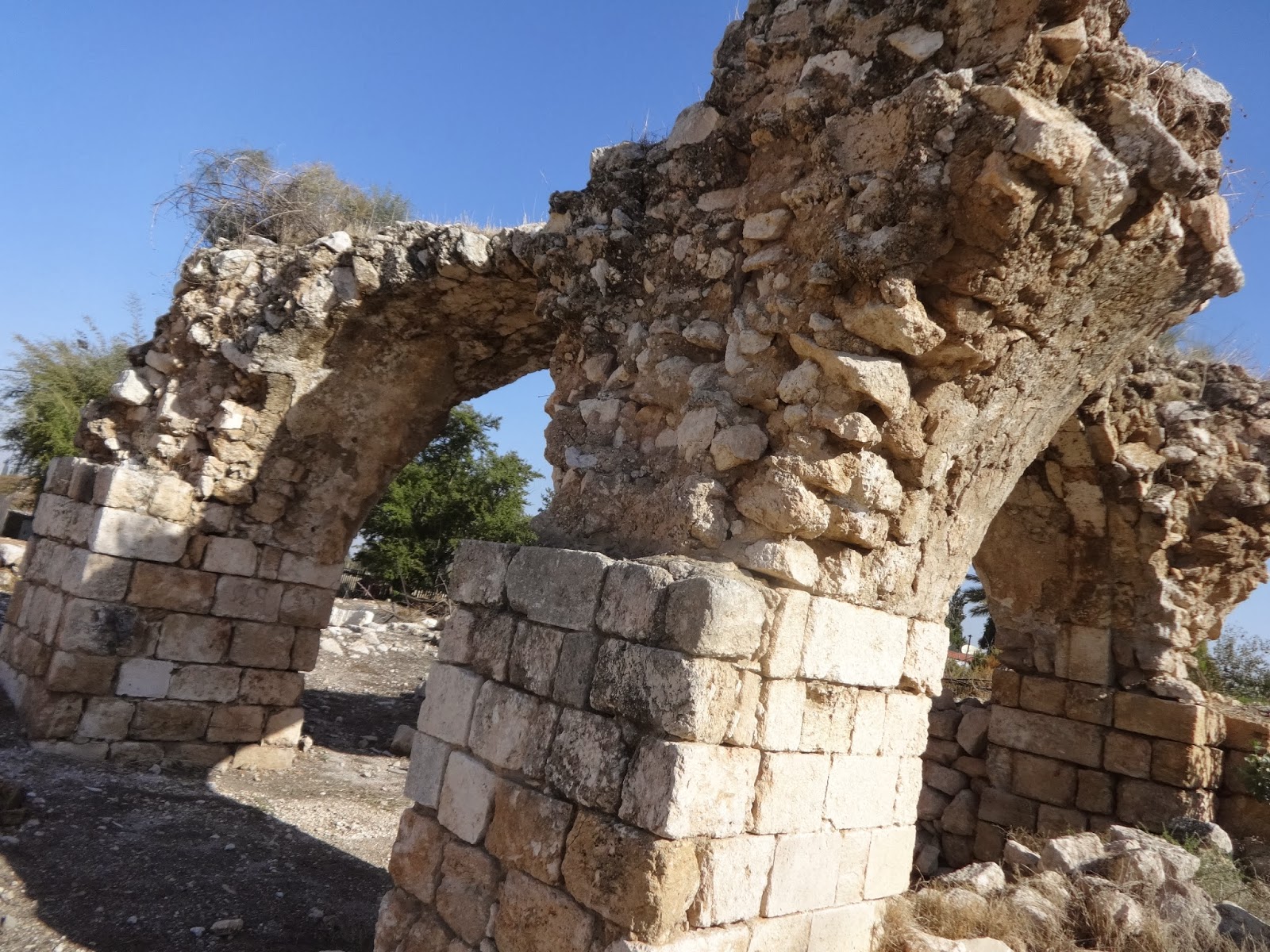 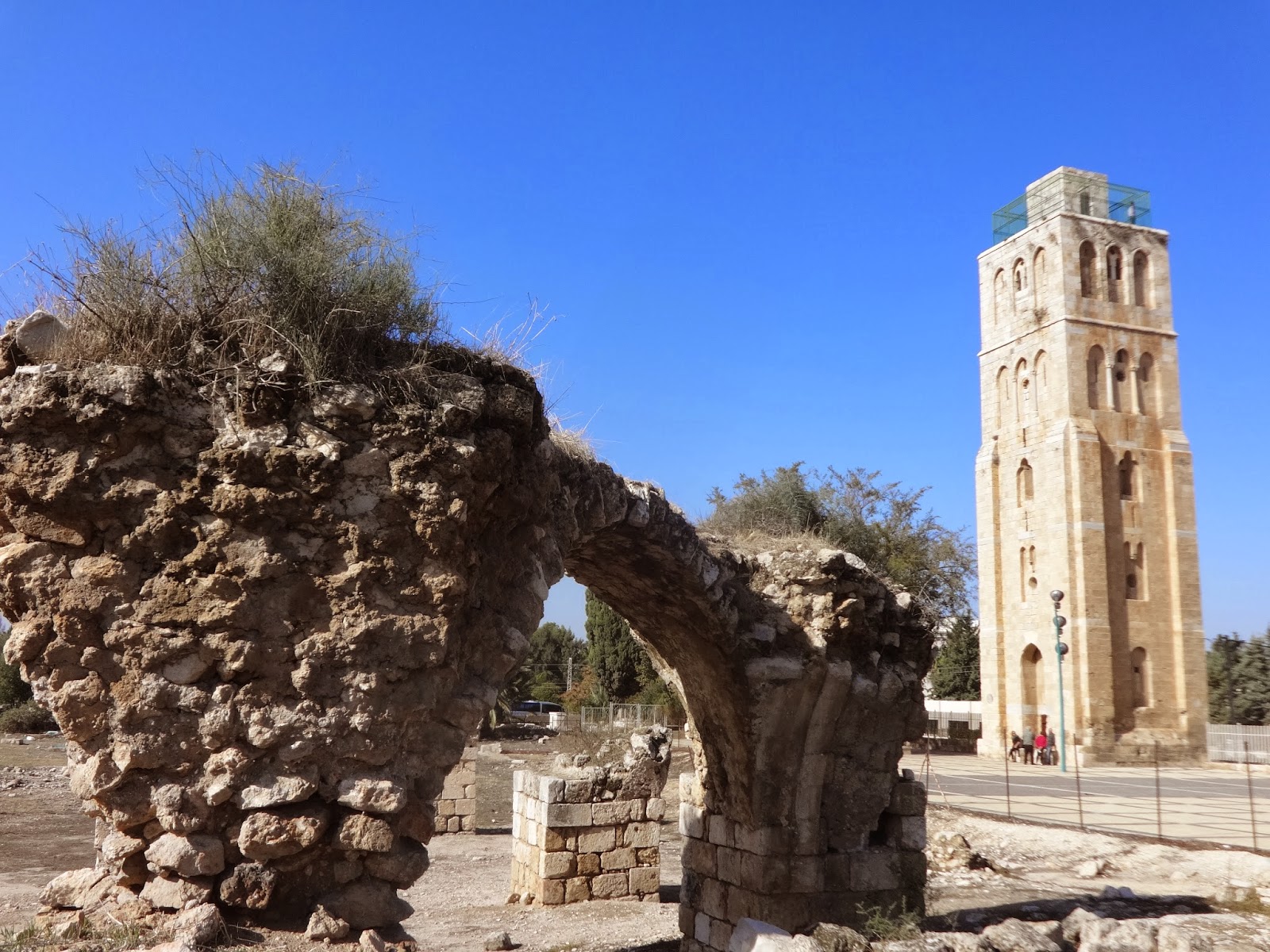 In the northwest corner of the complex is a shrine that local Islamic tradition associates with Nabi Salih, an ancient prophet mentioned seven times in the Koran.  I took no photos of the shrine, as unruly local children saw fit to throw snowballs at me upon approach.  Yes, yes, I realize that snow is not present in any other photos within this blog post.  You just have to trust me that it was still piled up from the previous weekend.

The site also contains three cisterns, though the entrance to each was locked.

One cistern that was open for public viewing is The Pool of Arches, an underground 8th-century reservoir located a few blocks away.  For a small fee, visitors are allowed to rent a 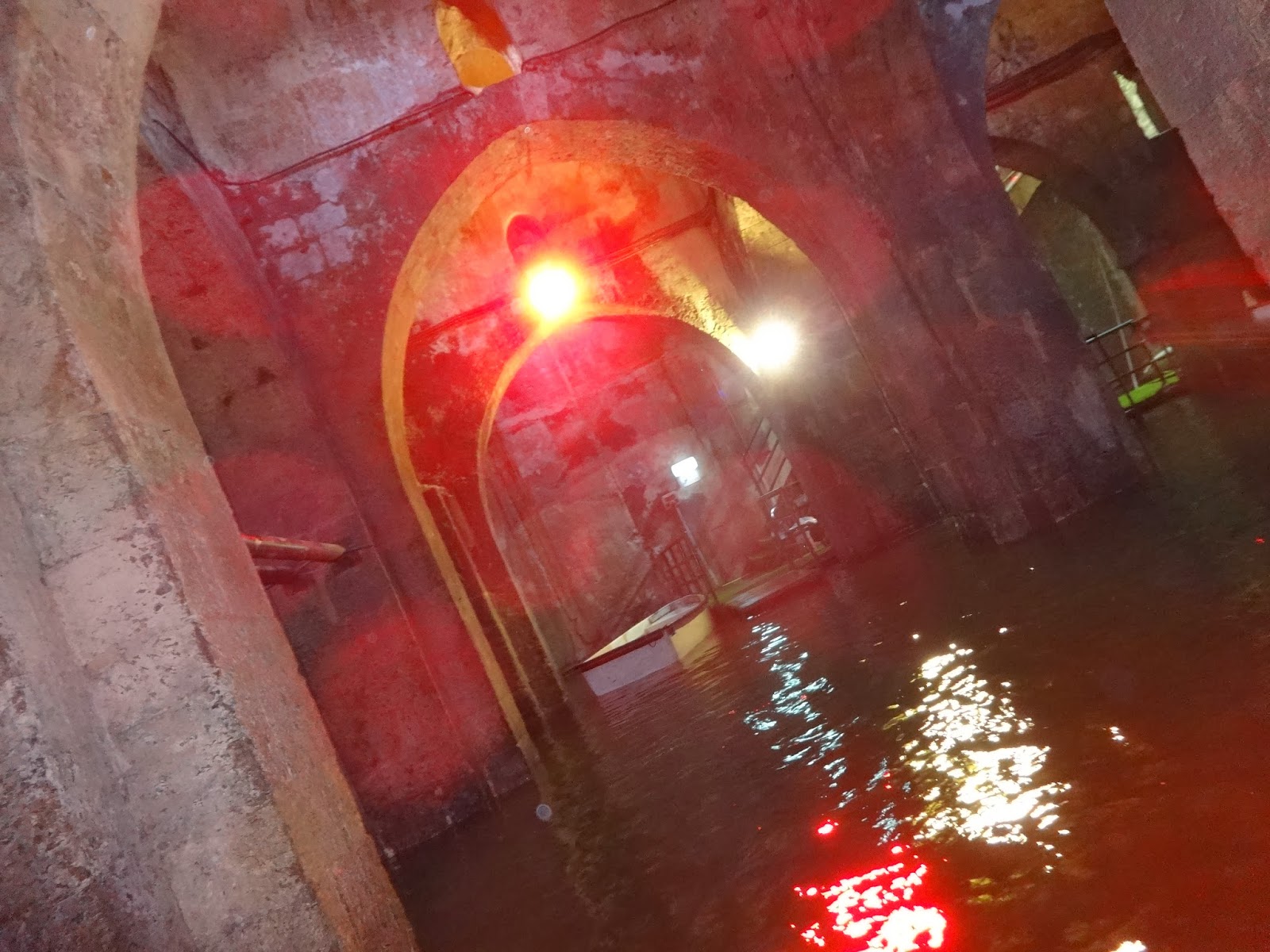 row boat from which to explore and admire the arches that support the small underground cavern.  The cistern was built in 789AD and the fact that it survived the severe earthquakes that destroyed much of the city, including The White Mosque, is a testament to the quality of its architecture.  The pool was built during the reign of Caliph Harun al-Rashid to ensure that Ramla had a steady water supply.  The pool was fed by rainwater from above, a spring from below, and an aqueduct funneling water from the direction of The White Mosque.  The pool was once known as "The Pool of El Anzia (The Pool of the Goats)," and held troughs for the watering of cattle.  Christians refer to it as "The Pool of Saint Helen," named after the mother of the Roman Emperor Constantine, who is traditionally thought to have ordered the pool's excavation. 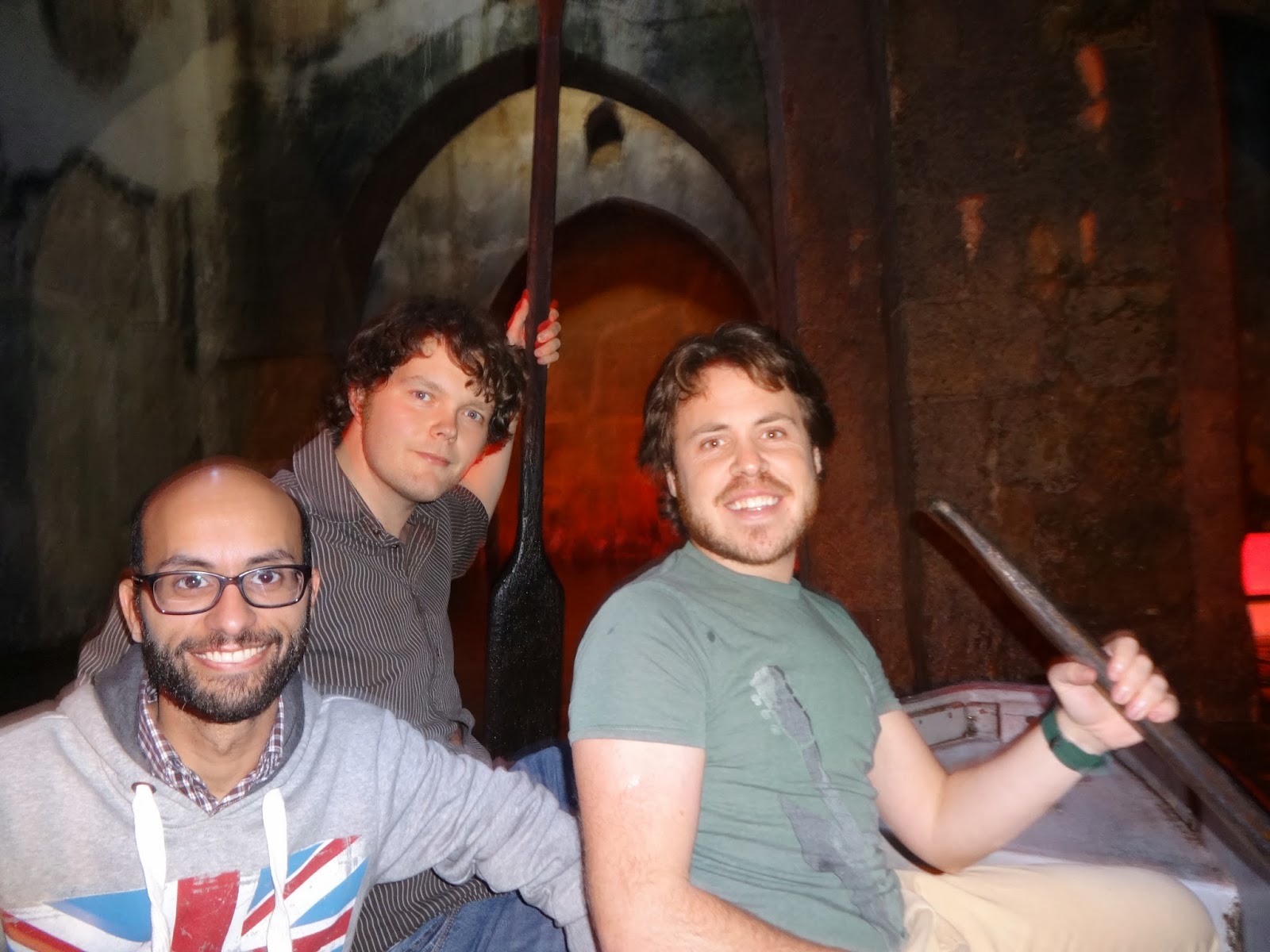 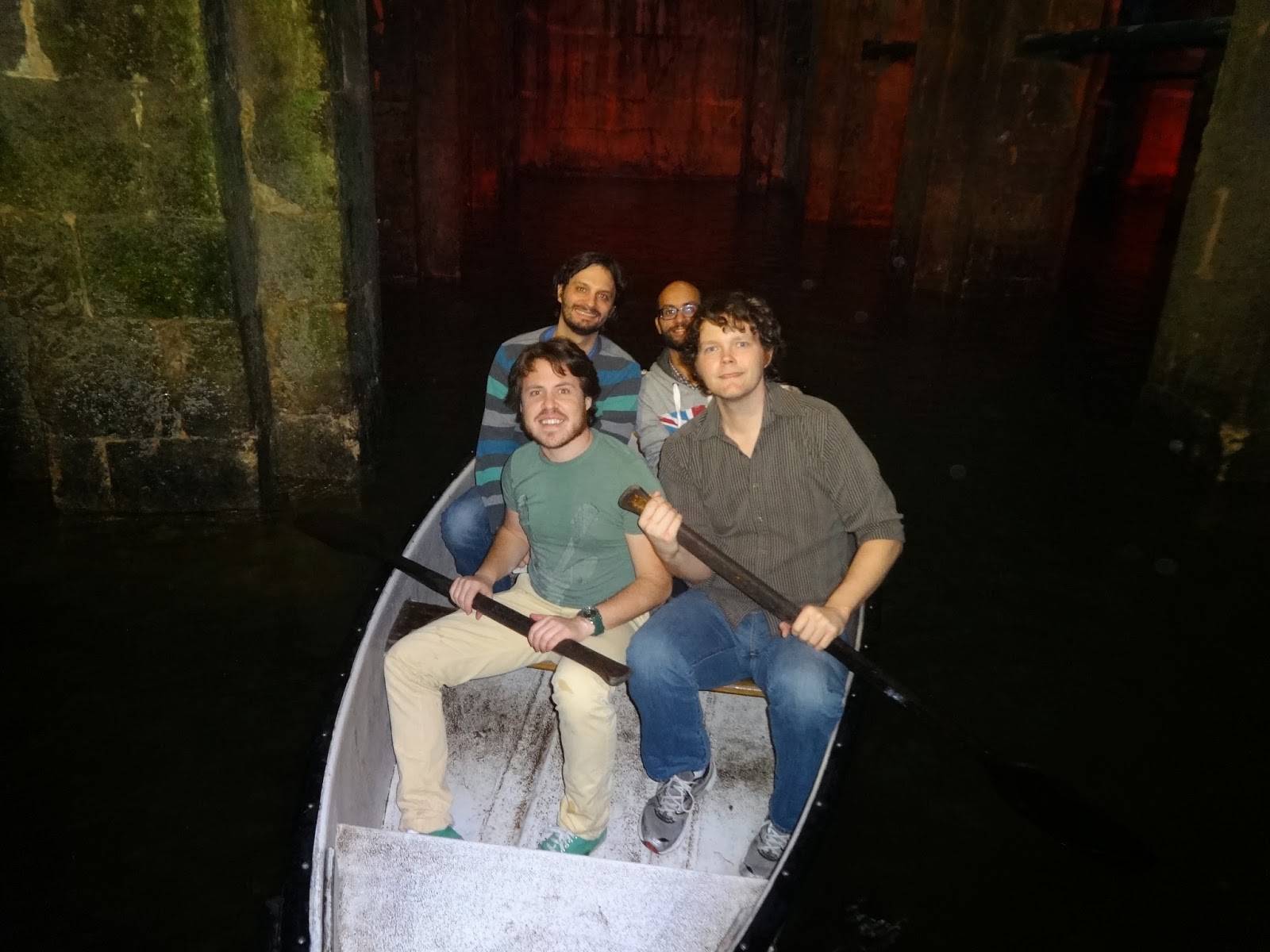 The rest of the morning was spent walking around encountering random things that I can't find any explanation for online, such as this beautiful Garden of Eden inspired mosaic...

…and a small park with a coexistence-inspired motif featuring busts of several famous individuals, including John F. Kennedy. 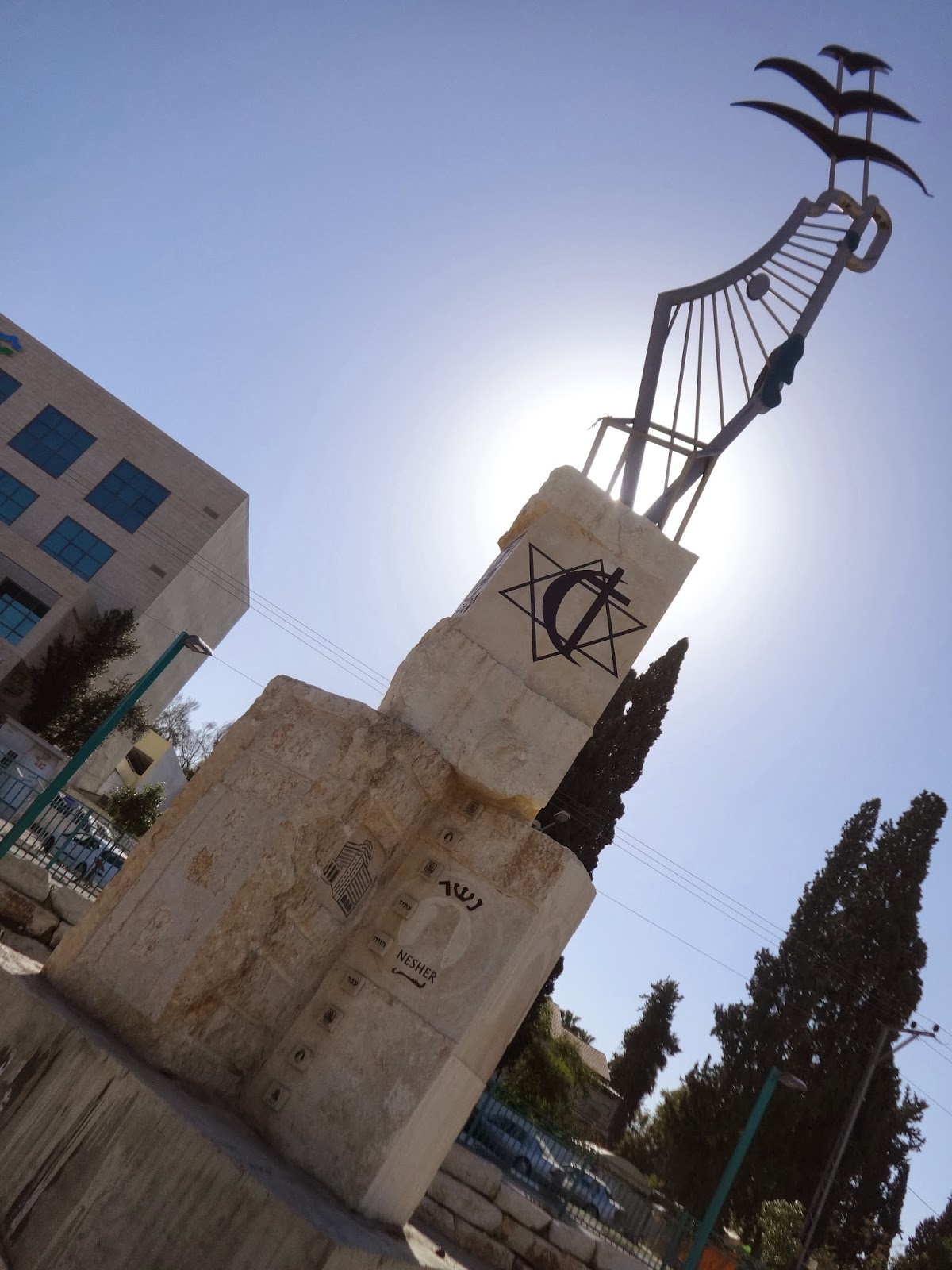 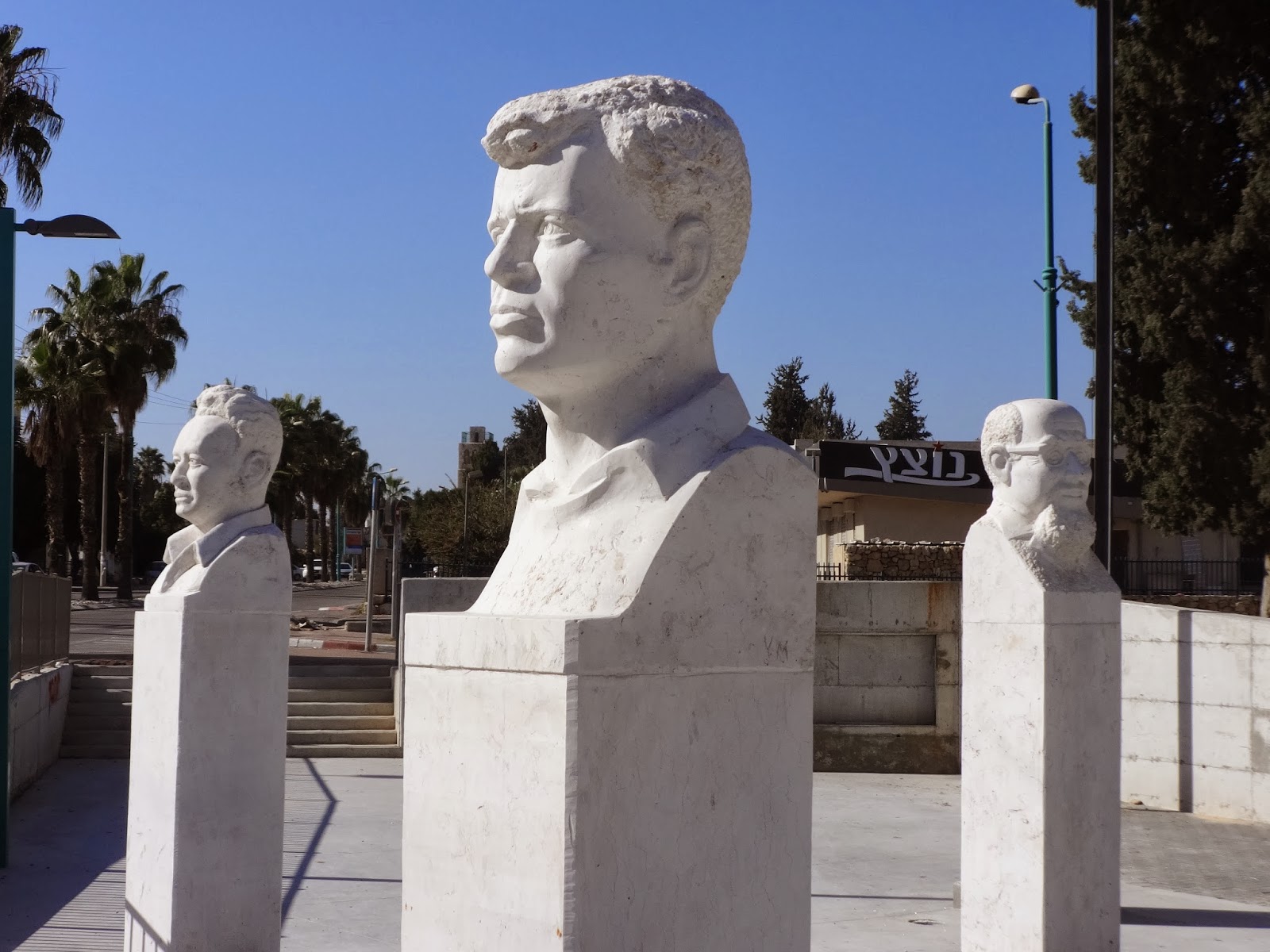 We wrapped up our morning in Ramla with a delicious lunch at Lonely Planet-recommended Samir's, an Arab family-run restaurant featuring various kebabs, hummus and salads. 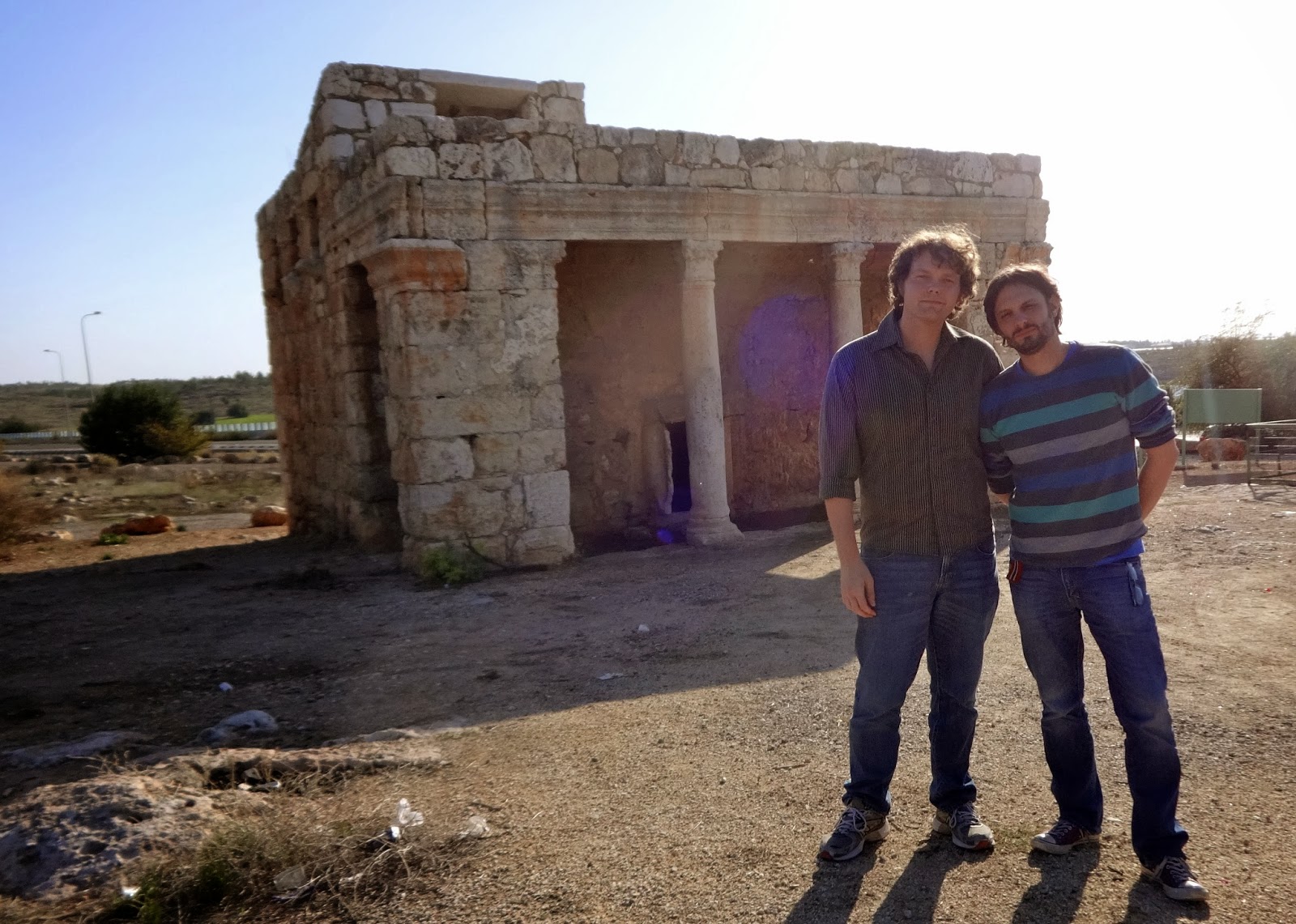 Our next stop was Mazor National Park, located in the town of El'ad, 25km east of Tel Aviv.  It was just a quick stop to visit the Roman Mausoleum, the only Roman-era building in Israel to be so well preserved from foundation to roof.  The mausoleum was built in the 4th century to act as the burial vault for an unidentified Roman couple.  A prayer niche facing toward Mecca was added by the Muslims of the region in later antiquity.  It was at this time that the mausoleum found new life as The Shrine of the Prophet John, functioning as a mosque until the depopulation in 1948 of the Palestinian village Al-Mazaryi'a.

Upon entering the first chamber, you will find the remnants of two sarcophagi, as well as the previously mentioned prayer niche.  A second chamber contains a dovecote with approximately 60 pigeonholes, where doves are theorized to have been raised as sacrifices to the goddess Aphrodite. 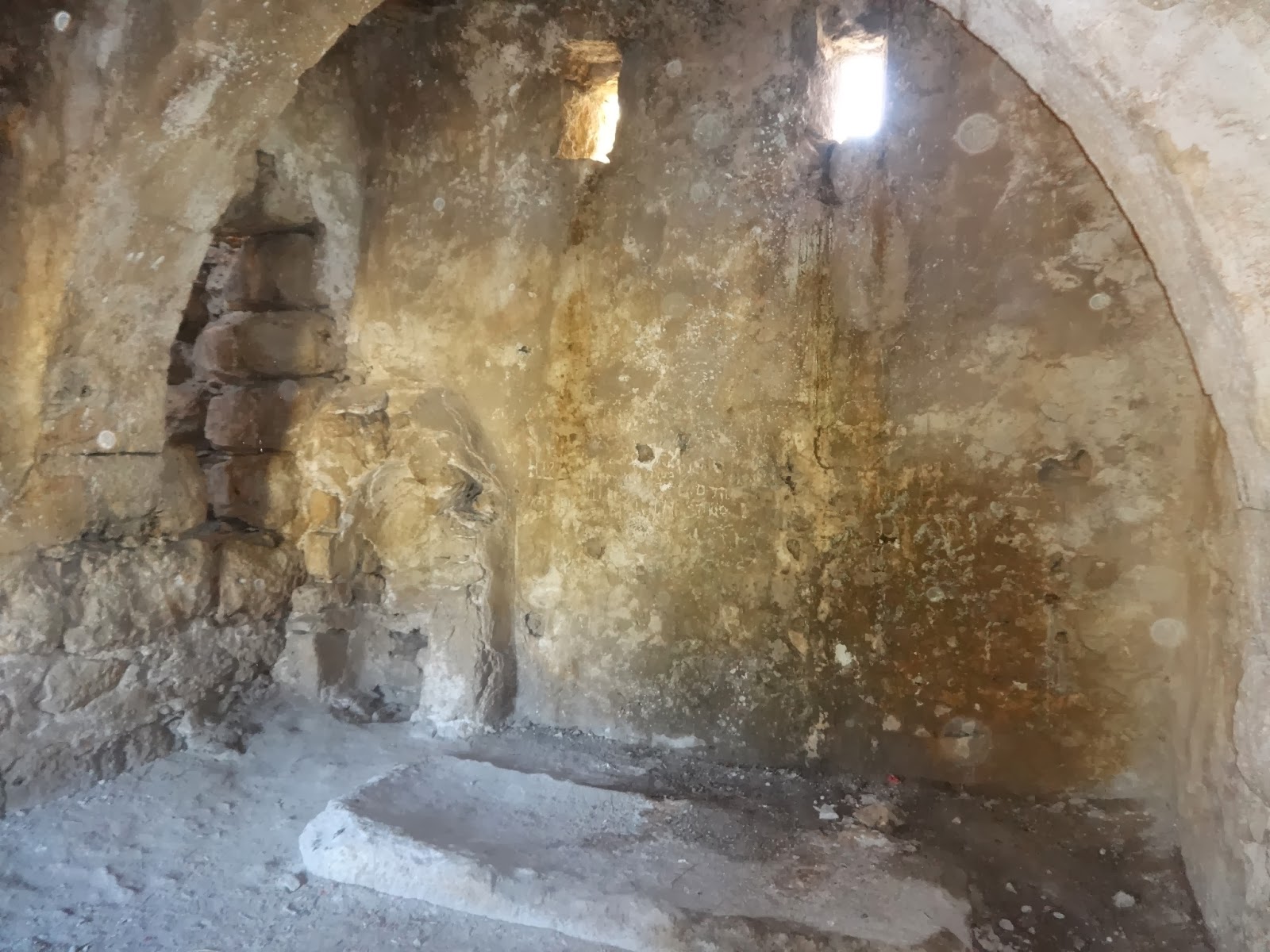 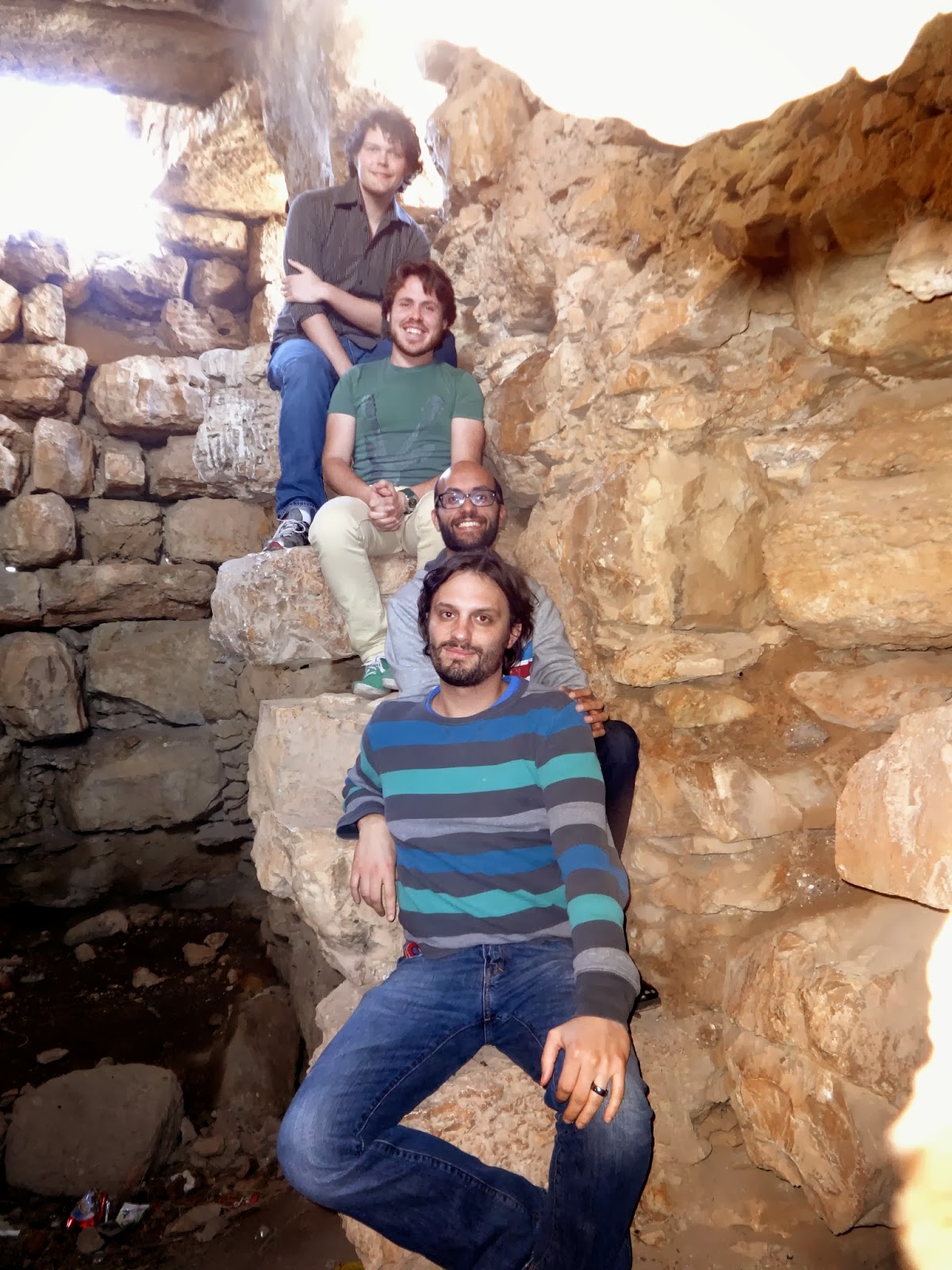 In 1949, not understanding the building's historical significance, the Israeli Defense Force targeted the structure for demolition and proceeded to use it for target practice.  The mausoleum was saved in July of that year, when an antiquities inspector arrived on the scene and prevented its destruction.

The mausoleum sits quietly along the side Road 444 near the turnoff to Kibbutz El'ad…but in ancient times this scenic road was part of the famed Via Maris, the Way of the Sea.  This major north-south highway led from Egypt through the land of Israel into Syria.

Our final stop of the day also lies along the ancient Via Maris:  Migdal Tsedek National Park, a beautiful and expansive stretch of land located in the western foothills of Samaria near Rosh HaAyin.

A Jewish community by the name of Migdal Afek was located here during the period of the Second Temple, but it was destroyed by the Romans in 67 CE during the Great Revolt.  The 12h century CE 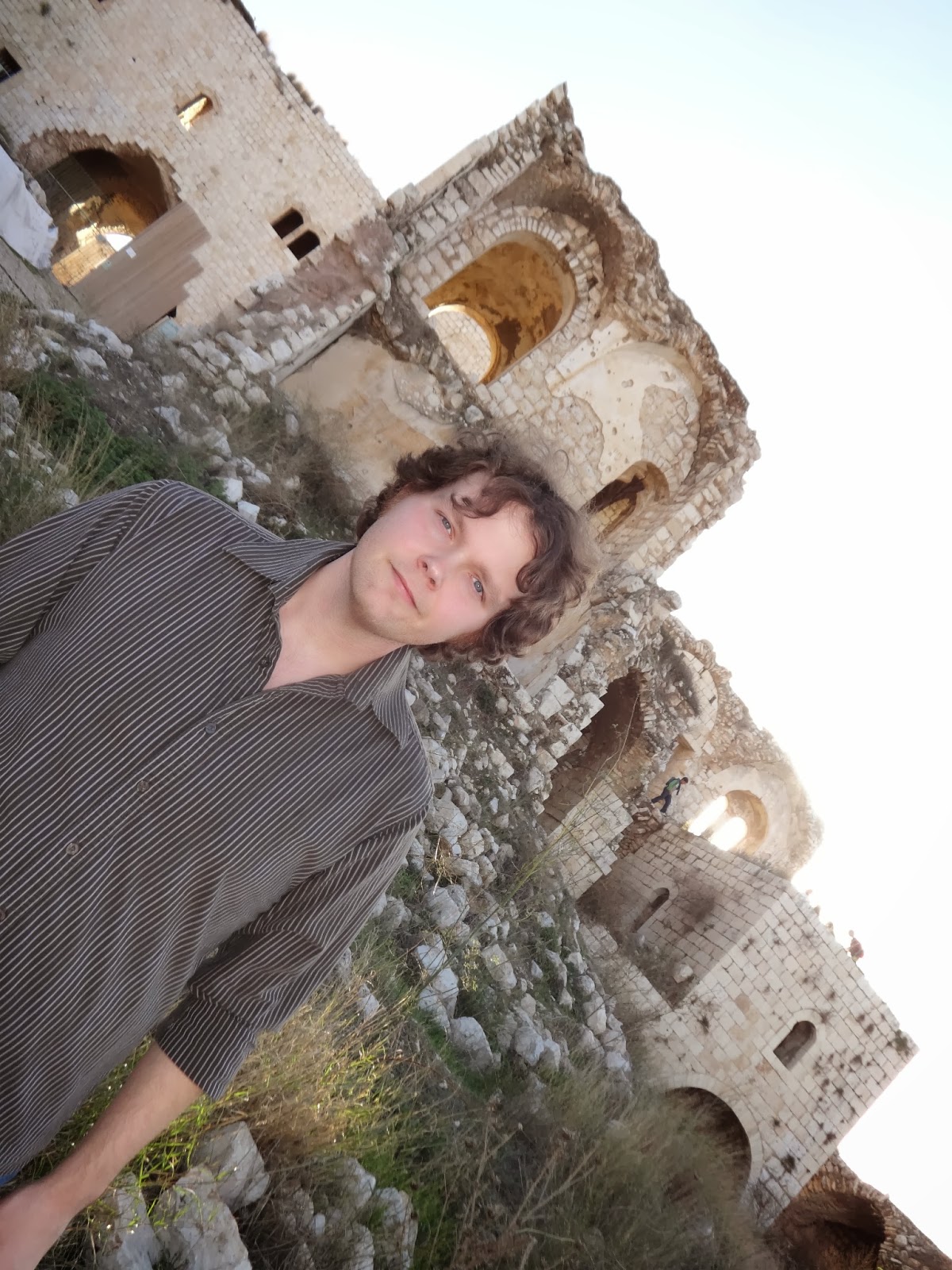 saw the establishment of a fortress, called Mirabel (miraculous beauty), on the site.  Muslim conquerors gained control of the fortress in 1187, only to demolish it in 1191.  It was eventually rebuilt.  An Arab village sprung up around the new fortress in the 16th century, and by the 19th century the fortress had been renovated into a castle from which Tsadaq Jama'ini took control of the area.  Most of the excavated site is from the 19th century castle and the 12th century Roman fortress.

The fortress was a little…odd.  The main entryway appeared to be locked, but there were several other points of entry around the perimeter, ranging from fence-bent-back-by-trespassers to no-fence-at-all.  Regardless, the place was positively SWARMING with people.  Some were picnicking on the rocks surrounding the fortress.  Others were climbing haphazardly up the side of collapsing walls.  More still somehow managed to find their way up onto the roof. 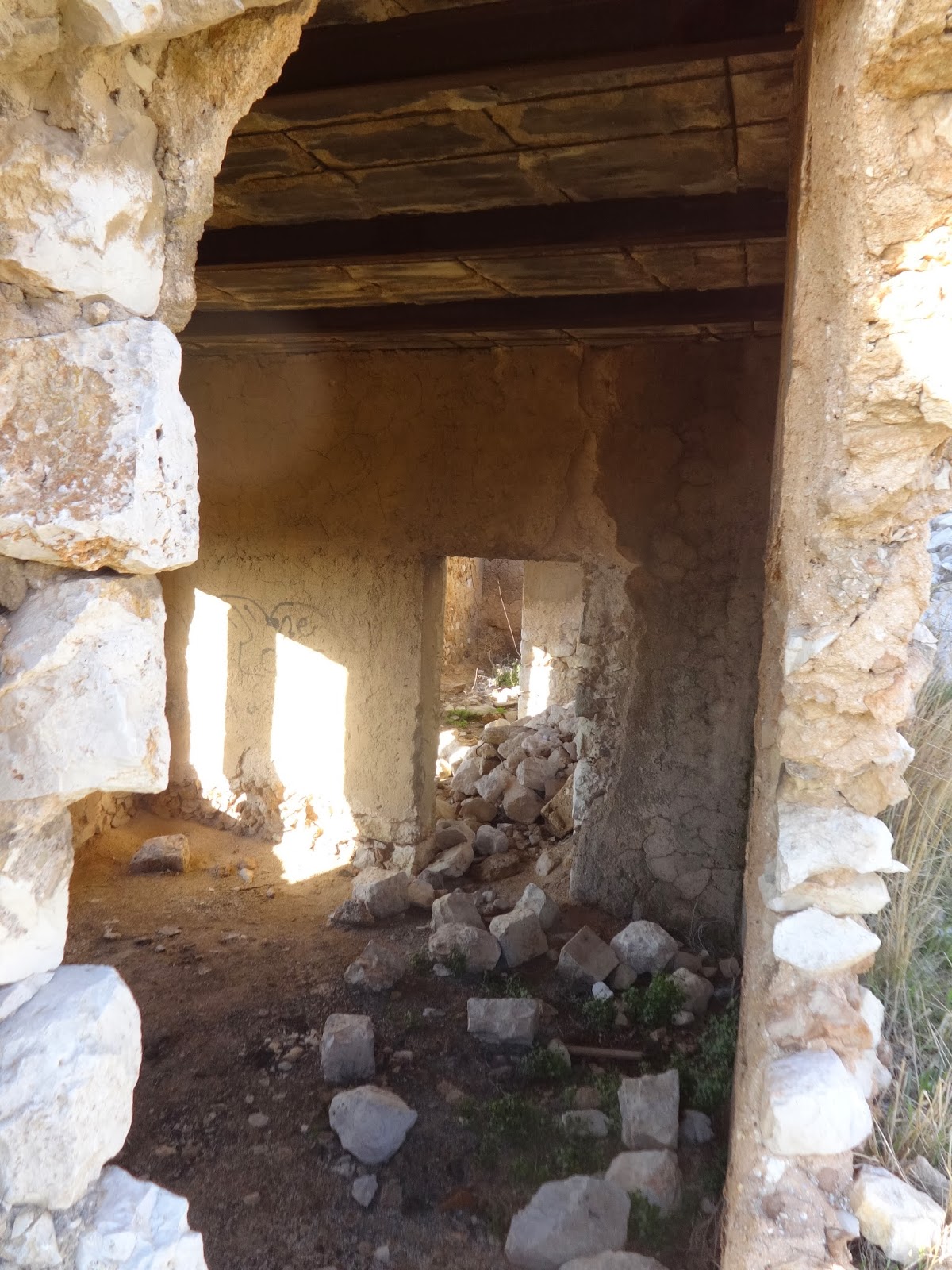 I was raised not to jump off of a bridge just because everyone else was doing it, so, deciding that discretion is the better part of valor, we simply posed for poorly taken selfies on the perimeter and allowed ourselves a quick looksie inside via one of the non-barricaded entry points.  It was a quick enough glance to see that a)  The place is falling apart and downright dangerous in certain areas, and b)  There is at least some small effort at renovation/restoration in progress.  It would be interesting to return one day if/when the entire site is open for public viewing just to see what sort of progress has been made.  The most immediate concern, however, seems to be looting, as there is glaring evidence that stonework is being stolen from this largely unattended historical site. 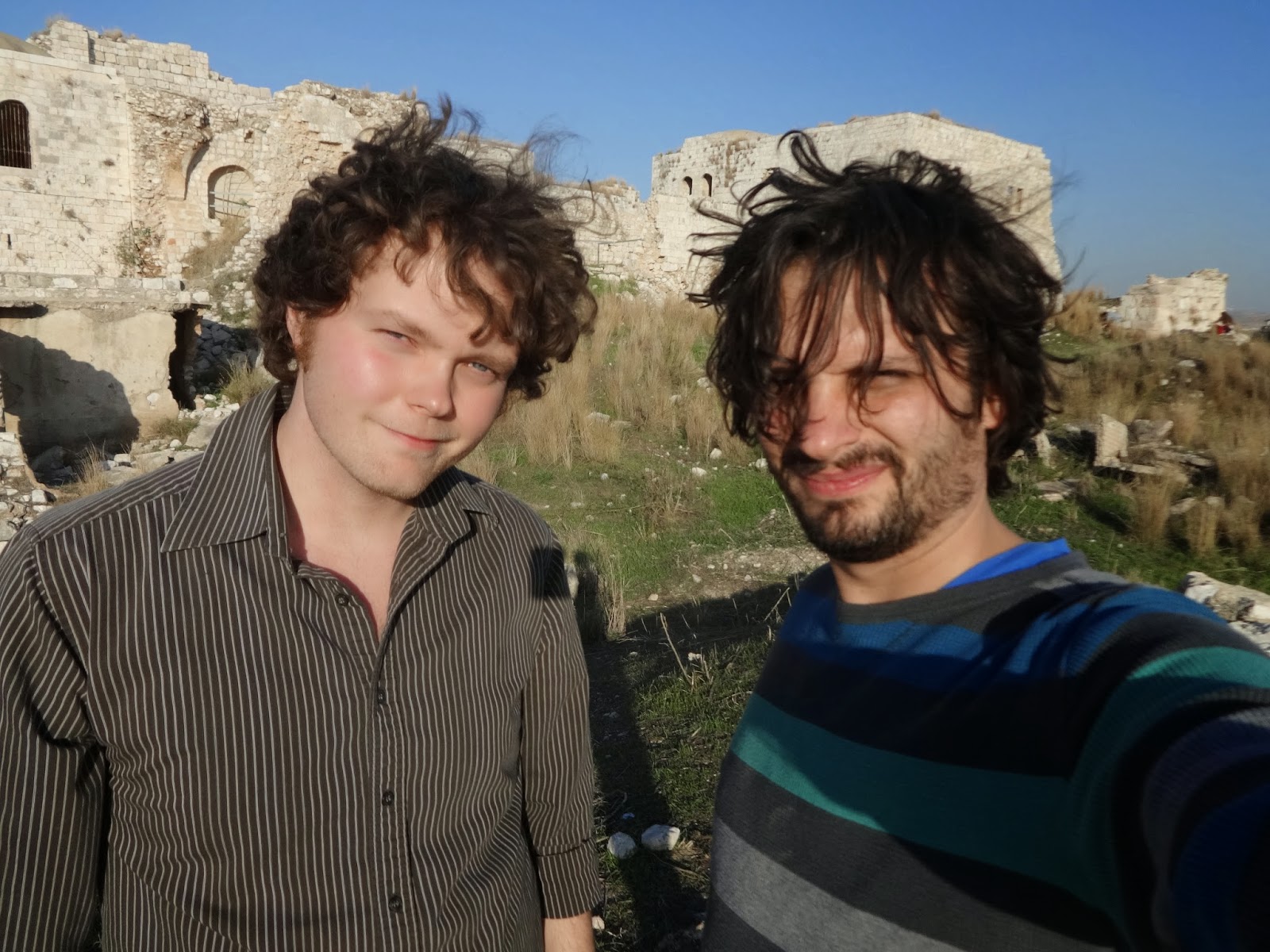 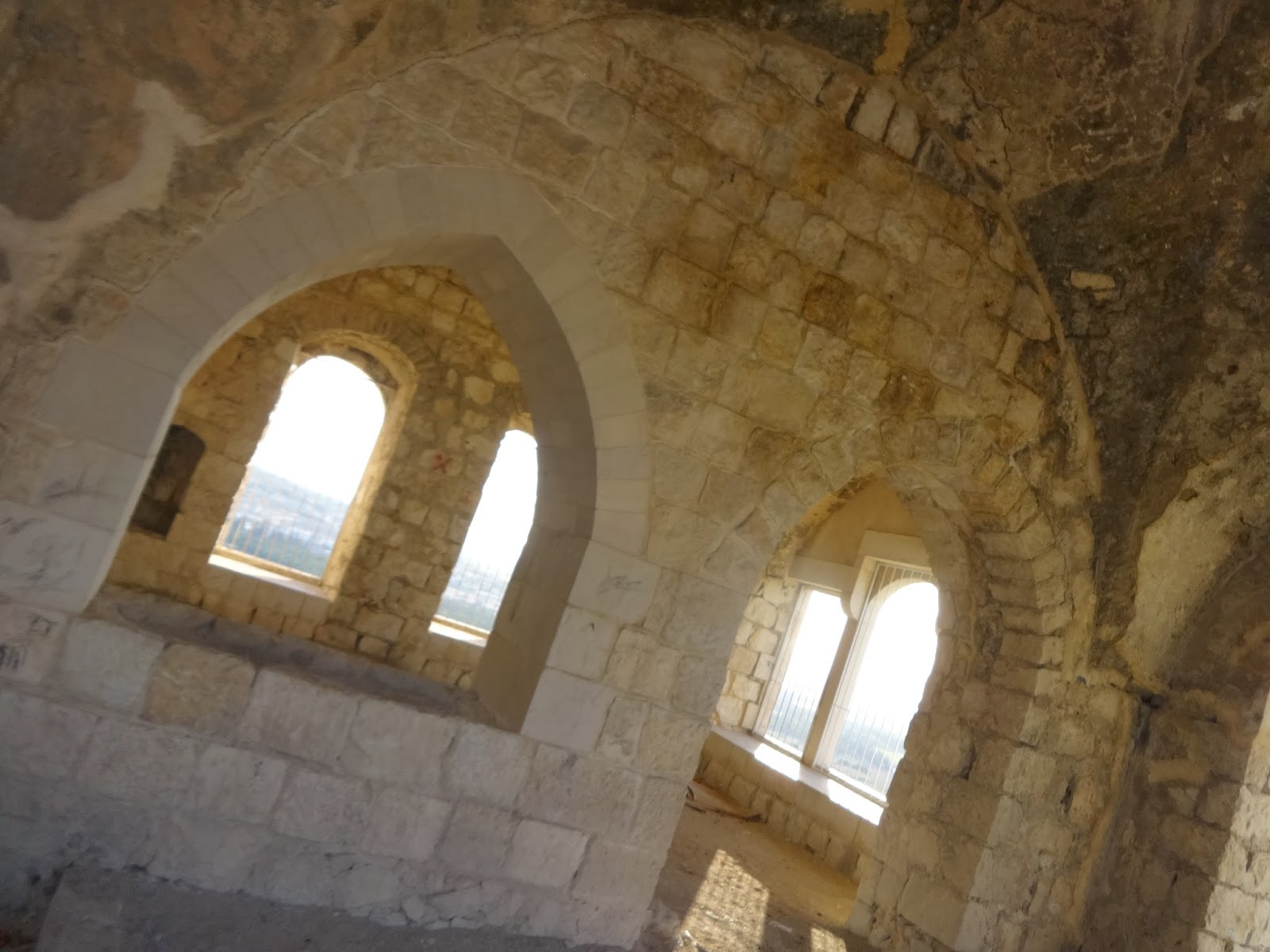 All told, it was an exciting day full of new sites that, frankly, we probably would not have seen had it not been for Aviv's recommendation.  All three locations were a bit off the beaten path.  I'm not sure we will ever find reason to go back to any of them (safe for Ramla, as a colleague lives there and we have an open invite for coffee sometime), but I'm thrilled to have had the opportunity to experience this tiny bit of history.  Not to mention the fact that all of that Roman history made for a nice segue into our honeymoon adventures...
Posted by Aaron at 5:14 PM