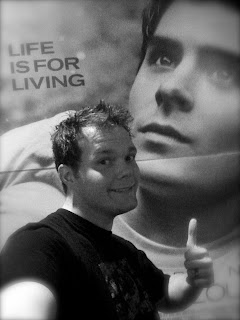 Why do you think that, as a society, we are typically too embarrassed to go to a movie by ourselves, to eat dinner alone, or to have a solo night at the bar?
It is because we are afraid that other people, people that aren't by themselves at the moment, people that we don't even know, will think poorly of us. A number of irrational fears run through our minds: Will they think we are ugly? Boring? Mean? Dumb? Anti-social? Bad in Bed? Hygiene deficient? Lonely? Friendless? Spouseless?
The fact remains that we are our harshest critics. Those people? They are too busy living their own lives to pay any attention to ours.
Knowing that doesn't make going out in public alone any easier, though.
I have never eaten in a restaurant by myself. During my days working in an office, if I felt the need to go out to lunch and I was alone, I would typically park my car at the far end of the lot and eat there, away from the judgmental eyes of others. On the rare occasion that I have eaten alone in public, it is a 10-minute stop at a fast food restaurant with my iPod blasting the world around me into oblivion as I inhale my food as quickly as possible.
Other than being dropped off at the theater by my mom to watch "The Lion King" for the second time in the summer of 1994, I do not think that I have ever gone to a movie alone.
And I have most certainly never gone to a bar without a companion.
Last week I posed the question as to whether or not I have made enough friends here to entertain me while TJ is in Ecuador. As it turns out, I have. I've been more than occupied with dinners, trips to the mall, sightseeing, and club hopping. But sometimes I just want some time to myself. And since I work from home, sometimes I just want to get out of the apartment.
And so, today, I went on a date with Zac Efron.
I drove to Ballston Common Mall this afternoon and dove headfirst into the easiest of the three alone-in-public nightmares: I took myself to see a movie. Charlie St. Cloud, starring Zac Efron.
I got there right as the previews were starting, and was admittedly relieved to find that I was the only person in the theater. There was no one to pass judgement! This was short lived, as, to my horror, two girls walked in shortly thereafter, stopped at my row, looked at me, and started whispering.
Of course I feared that they were talking about me. Look at him. He's alone. I wonder why people hate him? The hussies.
Yes. They had to be talking about me. Because it couldn't possibly have had anything to do with the fact that I was sitting dead-center, best seat in the house, and they were looking for the next best location.
That one instant notwithstanding, I had a great time. Although it's not something I plan on doing often, I am now confident that I will not melt into a puddle of shame if I go to a movie alone. I think I'd even like to try lunch alone, sans iPod, sometime soon.
But I'm still not going to a bar alone. That's just crazy.
(PS: If you remove Efron's smoldering good looks...Charlie St. Cloud is STILL an amazing movie. It's a shame it will be judged solely on the fact that it stars the High School Musical alum.)
Posted by Aaron at 9:13 PM

Email ThisBlogThis!Share to TwitterShare to FacebookShare to Pinterest
Labels: 365 Challenge