***We interrupt this important birthday blogging event to bring you
a special report on weather in the Washington, D.C. area.***

When we first moved to Falls Church in February 2010, I found myself telecommuting back to my old job in Orlando and feeling very lonely and fish-out-of-watery while TJ spent his days learning Spanish and hobnobbing with diplomats at the Foreign Service Institute.  One of my coping mechanisms was to build a snowman named Bernard on our balcony.  He kept me company as I worked (or, more accurately, pretended to work).  He eventually died. It was sad.

He was a good snowman. Not too big, not too small.  Never one to put on airs, yet always stylish, he had a dapper dish towel for a scarf.  I always promised that, if I were to find myself back in the D.C. area for winter, I would bring him back to life, all Frosty Returns style.

To my immense joy, we arrived in October, just before prime snowman season began. Sadly, anticipation for Bernard's return diminished quickly as the winter months passed without much snow.  Imagine my surprise when, just days after the start of the spring season, the Metro D.C. area was bombarded with snow.

I returned from work this afternoon (Yes.  The Office of Personnel Management, which likes to cancel work at the drop of a hat if the weatherman even hints at snow, failed to call it a snow day when there was actually white stuff on the ground) and quickly surveyed my surroundings.  There was no balcony snow.  This wasn't good, as I don't trust ground snow. I mean, I have two dogs.  I know what happens on the ground.  Taking stock of the situation, I noticed a large concentration of accumulation on  the stair railings.  Emptying my insulated lunch bag of its tupperware and utensils, I quickly filled it to capacity with rail snow and scurried up the stairs to create life.

The results were dazzling. 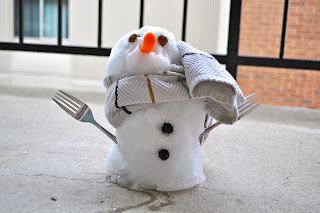 He was magnificent....and yet, I noticed immediately that he had begun to piddle on the pavement.  It simply wasn't cold enough to keep him alive.  Not so easily defeated, I concocted a counter maneuver.  Mother Nature ain't got nuthin' on me. 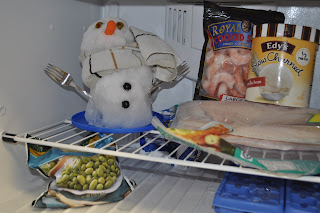 When TJ returned form work this afternoon, I threw open the freezer door in triumph.  He stared for a moment and then let out a raucous laugh.  I think he was pleased.  He knows how much I enjoyed Bernard's company, and I think he was happy to see him again as well.

Of course, I don't think he knows that Bernard has moved in permanently.  We will deal with that tomorrow.
Posted by Aaron at 11:35 PM