We capped off my birthday weekend with a trip to the circus.  Yes, the circus.  Cuz that's how we roll.  It was a fun day.  Better than either of us had expected, which was amazing since TJ, assuming I like all things juvenile, suggested that we go even though he didn't want to, and I, not really wanting to go either but thinking that his suggesting it meant that HE wanted to go, said yes.

The name of the show was Dragons, and the theme was that different warring tribes have come together for a competition in which they must demonstrate Strength, Courage, Wisdom, and Heart in order to release the power of the dragon within.  Sounds like a rejected premise for Captain Planet and the Planeteers, but it really was a good setup for the circus acts that followed.

We bought the nosebleed tickets because, frankly, $65 a head seemed a tad excessive for ringside seating at a "regular" circus.   Maybe if it had been Cirque du Soleil.  Maybe.

In a much appreciated move, the doors opened an hour early for ticket holders to go ringside and view the human and animal performers up close.

We got to see an elephant paint a masterpiece and then play the harmonica... 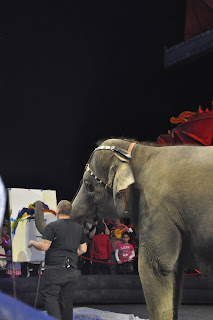 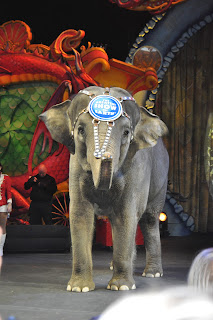 We saw some kids learning to be Kung Fu masters... 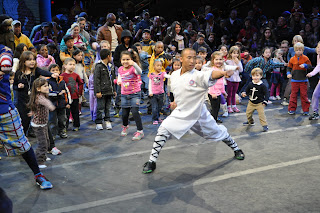 And we got these awesome clown noses. 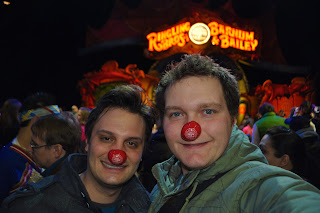 When the show began, we grabbed our Kleenex (for the nosebleeds) and headed up top.  Picture quality diminished, but hey, what can ya do?

Spoiler Alert:  At the show's conclusion, The Planeteers succeeded in releasing the dragon. *gasp!*

All in all, it was a wonderful conclusion to a wonderful birthday weekend.  I'd do it all again in a heartbeat.  Only, can I skip the aging part next time?  No need to rush things.