We kicked off my birthday weekend last night with a trip to Tysons Corner for dinner and a movie.

Brad Anderson's The Call was our movie of choice.  It is a new thriller about a 911 operator (Halle Berry) coming to terms with the fact that a mistake she had made on the job six months prior had resulted in a caller's death when suddenly another girl (Abigail Breslin) calls in, having been kidnapped by the same creep.  At the midway point of the operator's quest for redemption, I became queasy and feared that I would not be able to enjoy my dinner.  At first I silently chastised myself for eating the leftover pizza I had found in the fridge earlier that afternoon, but I quickly realized that it was just movie anxiety.

As we left the theater, two topics of discussion arose.  Topic number one consisted of basically patting ourselves on the back for choosing a good movie.  For real.  Go see it.

I remember back in high school when these movies didn't bother me.  In fact, I can remember getting Scream masks with my guy friends and scaring the crap out of our girl friends during a Friday night horror movie marathon, because these are only movies and it is ridiculous to be afraid of them.

College through the mid-twenties, these were just fun escapist popcorn flicks.  Sure, they'd make me jump every now and again, but once the brief panic subsided, I'd find myself laughing at how ridiculous I was being.  This seemed to be the case up through Texas Chainsaw Massacre (2003) and Saw (2004).

Everything after that, including the sequels to the above mentioned films, makes me squirm uncomfortably, sans giggling.  I still watch them because sometimes you stumble across an interesting story, but I don't find them all that funny anymore.  Usually they are difficult to watch.  My theory on the matter is that, after a certain age you stop escaping into the world of fantasy and realize that there really are some sickos out there that get their jollies on this kind of thing.  The Call is a good example of that.  No supernatural elements whatsoever.  Just a mentally disturbed man that you could read about in tomorrow's newspaper headlines.

Of course, the more likely answer is that the older we get, the more out of touch we become with today's youth and pop culture.  (And, you know, our hearts get weaker.)

As we entered La Sandia (translation:  The Watermelon), a Mexican restaurant that we had enjoyed during our 2010 stay in the area and were curious to try again with our post-Guadalajara taste buds, the more likely answer seemed to present itself as the absolute answer.  TJ had made reservations earlier that day and had included the little gem that it was my birthday.  The hostess greeted us and asked how old I was.  I crinkled my nose and admitted that I was turning 33.  After giving me the elevator eyes, she said "That's not bad. You look much younger.  You've got a grungy/edgy look about you, kind of like  ---."

Now, I understood grungy/edgy completely.  I was wearing jeans, Converse sneakers, and a blue hoodie.  What I didn't understand was who I apparently look like.  So I asked her to repeat herself.  She said it again, explaining that he was a singer.  I had no idea who she was talking about.  Two problems immediately presented themselves.  One, I couldn't hear her clearly (old), and two, what I could hear didn't sound like anybody I had ever heard of (old again).

TJ looked at her, then looked at me, and said "Well, you can say he's not old all you want, but you just proved that he is."  We laughed as she offered a weak apology and scurried away.

Dinner was great.  I had been feeling homesick for Mexico and took the opportunity to order chicken mole poblano, the most authentic dish I could find on the menu.  The sauce was very reminiscent of what you would find in a restaurant in Mexico...and in my very own kitchen, thanks to some cooking lessons from my friend Bertha.

As we drove home, a Facebook notification alerted me to an e-mail from another friend, Alfa, who I met while working at USCG Guadalajara.  It was the entire text of the Mexican birthday song, Las Mañanitas.  My friend Esperanze did something similar this morning.  Such a special treat.  Local staff sang this song to everyone on their birthdays, and to me 5-10 times throughout the day and maybe the following day as well.  Likely because it was fun to embarrass me, but also I like to think because they knew it made me smile.  They also sang it on our last day of work, since they wouldn't be able to do it this year.

I awoke this morning to the sound of TJ crooning "Las Mañanitas" in my ear.  It was sweet and brought back lots of fond memories.

Look at all the memories and friends you accumulate along the way.

Now please excuse me.  I've got candles to blow out and red velvet cake to eat. 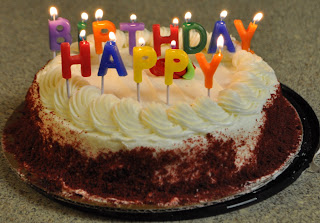