Our day in Athens began much the same way our day in Olympia had: hopping on a tour bus and being handed an audio receiver that was sure to function just well enough to not allow me to demand a refund.  That was fine.  I had learned quickly to just ignore the tour guide and merely use her as a means for reaching my destination. 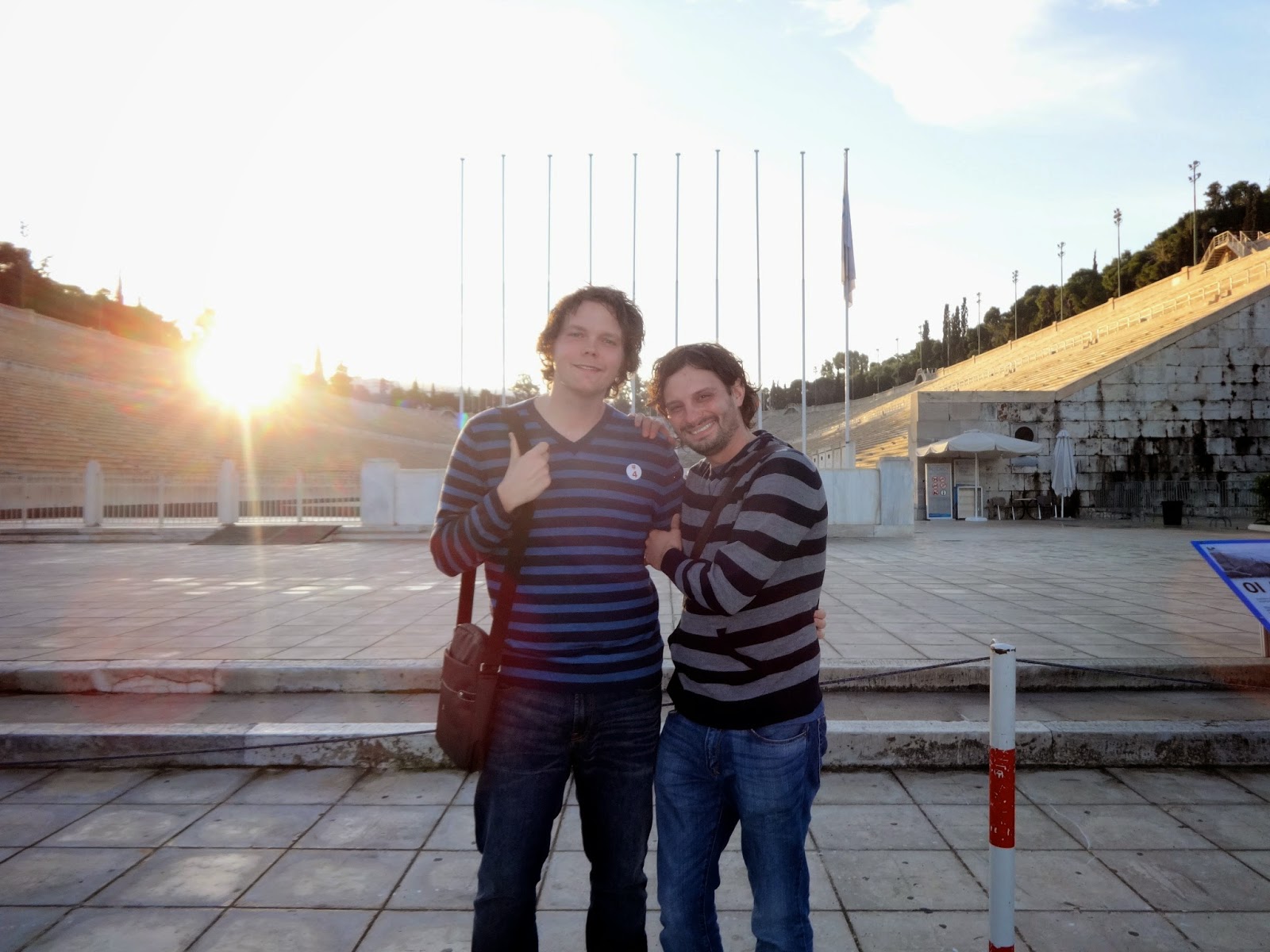 Our first stop was the Panathenaic Stadium, which hosted the first modern Olympic Games in 1896.  Reconstructed from the remains of another ancient stadium, it is the only major stadium in the world built entirely of white marble.  As mentioned in my Olympia post, a special ceremony is held here just prior to the torch relay every Olympic cycle.  This was but a short stop in our day's journey, just long enough to snap a couple of photos.  Then, we were off to the Acropolis!

View of Athens from the Acropolis summit

The Acropolis is  an ancient fortress located on a rocky outcrop 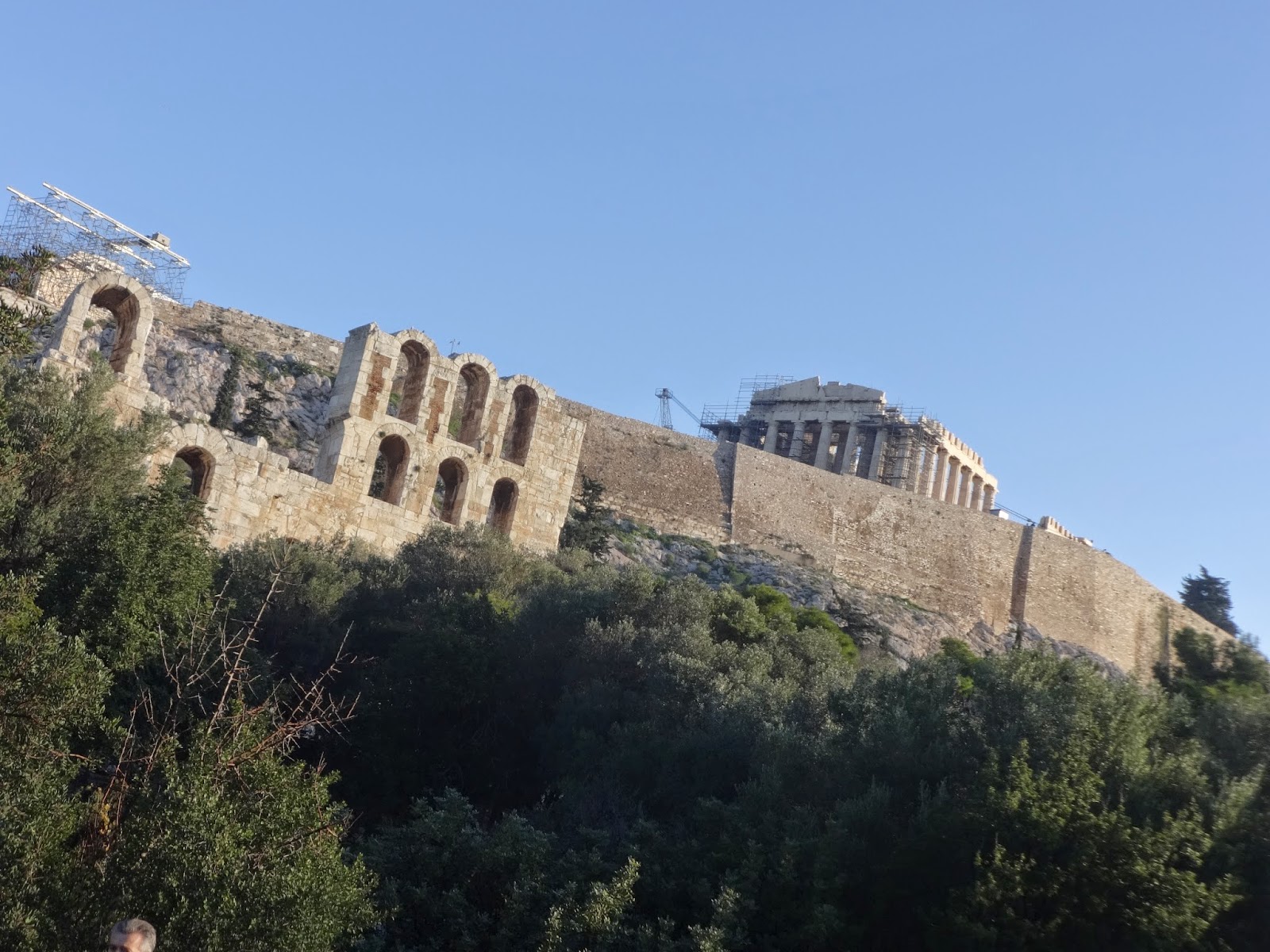 overlooking Athens.  It contains the remnants of several ancient buildings, most notable among them being the Parthenon.  Adding to our collection, it is a UNESCO World Heritage Site.

Archaeological findings suggest that the hill has been inhabited since the fourth millennium BC, but it wasn't unit the fifth century BC that construction began on the major structures recognized today.  Significant structural damage befell the hillside during the Morean War when, in 1687, the Venetians launched a barrage of cannonballs at the Acropolis.  The Parthenon was being used as a storage house for gunpowder at the time.  It was hit.  The results were not pretty.

Having been a huge fan of the Graeco-Roman pantheon of gods as a child, this vacation was a dream come true.  Prior to January, though, my biggest exposure to such things was Hercules, Xena, Wonder Woman…and my friend Dan Williams, who participated in Stan Lee's SyFy Channel reality show "Who Wants to be a Super Hero 2."  He used the code name Parthenon.  I met Dan right before his season began airing through Sunday brunch with a mutual friend, and my inner geek demanded that I befriend him.  Random trivia, he designed the logo I use for my blog.  Thanks, Dan!

Anyway, back to the vaycay. 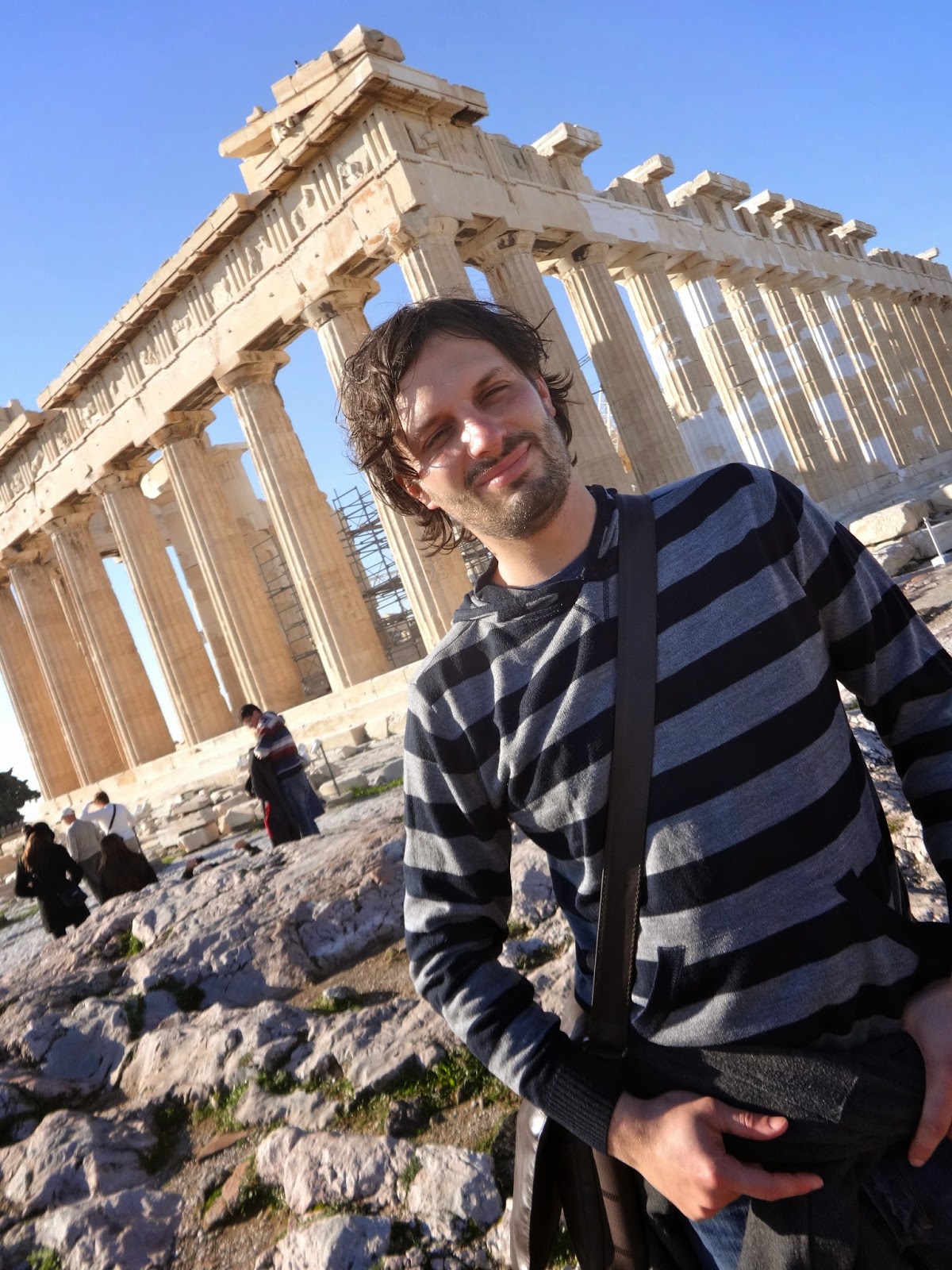 The Parthenon is a temple that was dedicated to the goddess Athena, after whom the city of Athens was named, and whom the citizens of the period considered to be their patron.

Our guide told us a rather ridiculous story about how Athena and Poseidon lobbied the people of Athens over who should be the city's patron.  We were told that all of the men voted for Poseidon, while all of the women voted for Athena.  There were a few more women than men, so Athena won.  Poseidon flooded the city in a fit of rage, causing much property damage.  Because of this, men took the right to vote away from women...a punishment that lasted until 1952.  Isn't it charming when religion is used as a justification to persecute a subset of society?  #UmNO.

The Parthenon is "the most magnificent creation of Athenian democracy at the height of its power," according to the official website.  Doesn't that sound impressive?  Construction began in 447BC, and it replaced a previous temple to Athena that was destroyed in the Persian invasion of 480BC.  The temple has had many purposes throughout its existence:  treasury, Christian church, mosque, and tourist trap.  The temple was severely damaged in the aforementioned 1687 assault.  London's British Museum purchased many of the surviving sculptures in 1816.  The Greek government has spent the last 32 years trying to get them back.  No luck thus far. 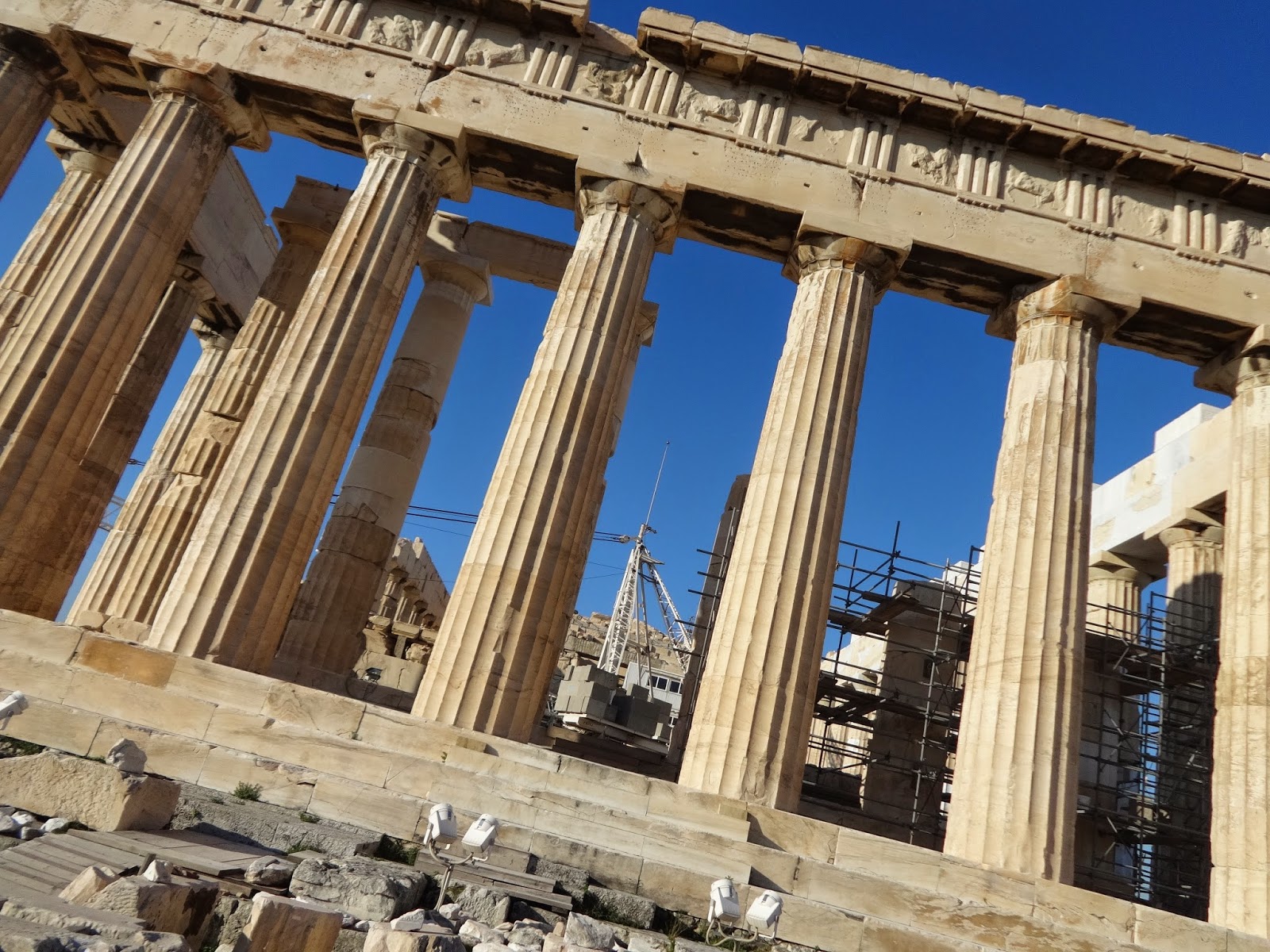 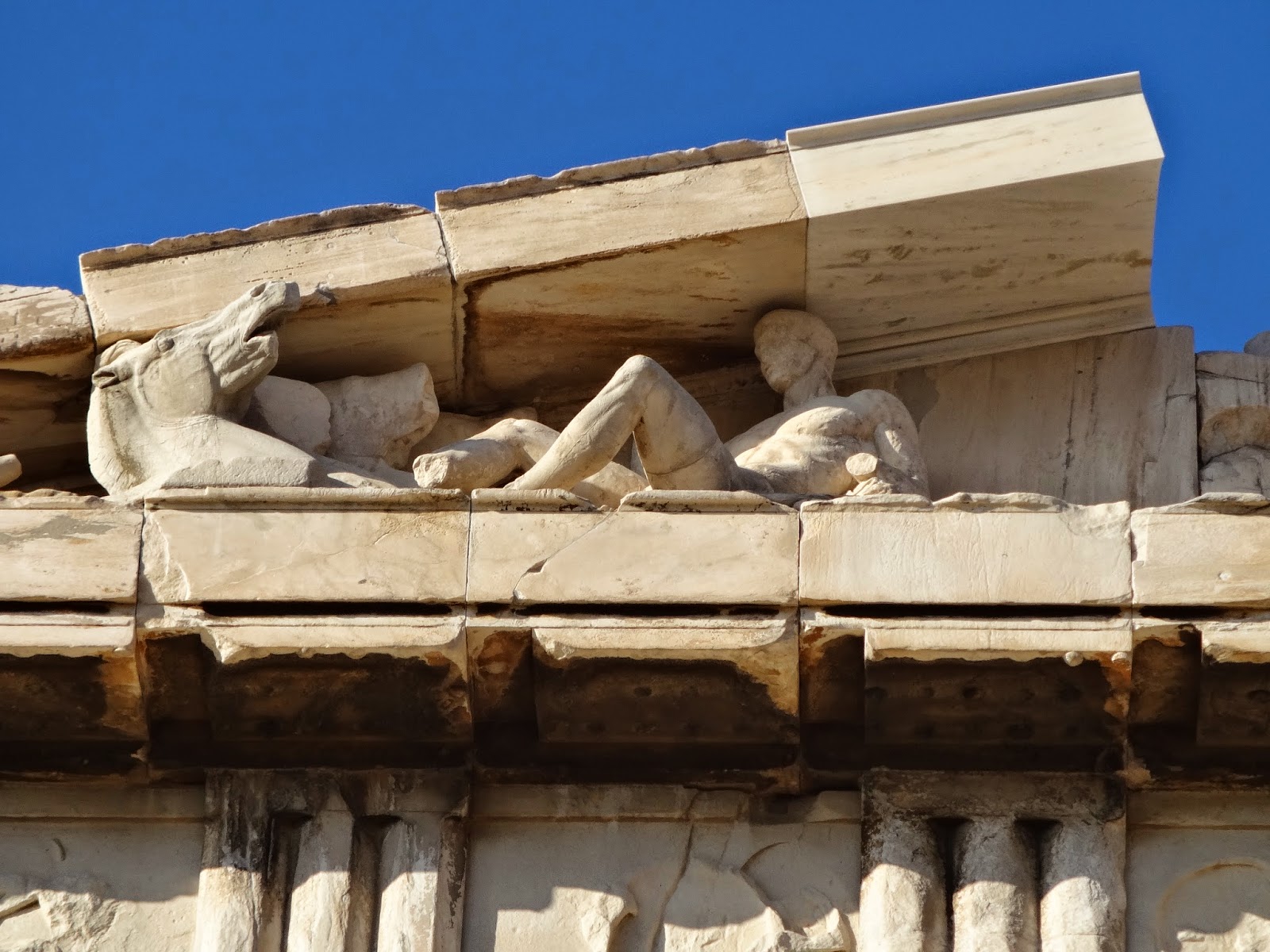 Other scenes from the day… 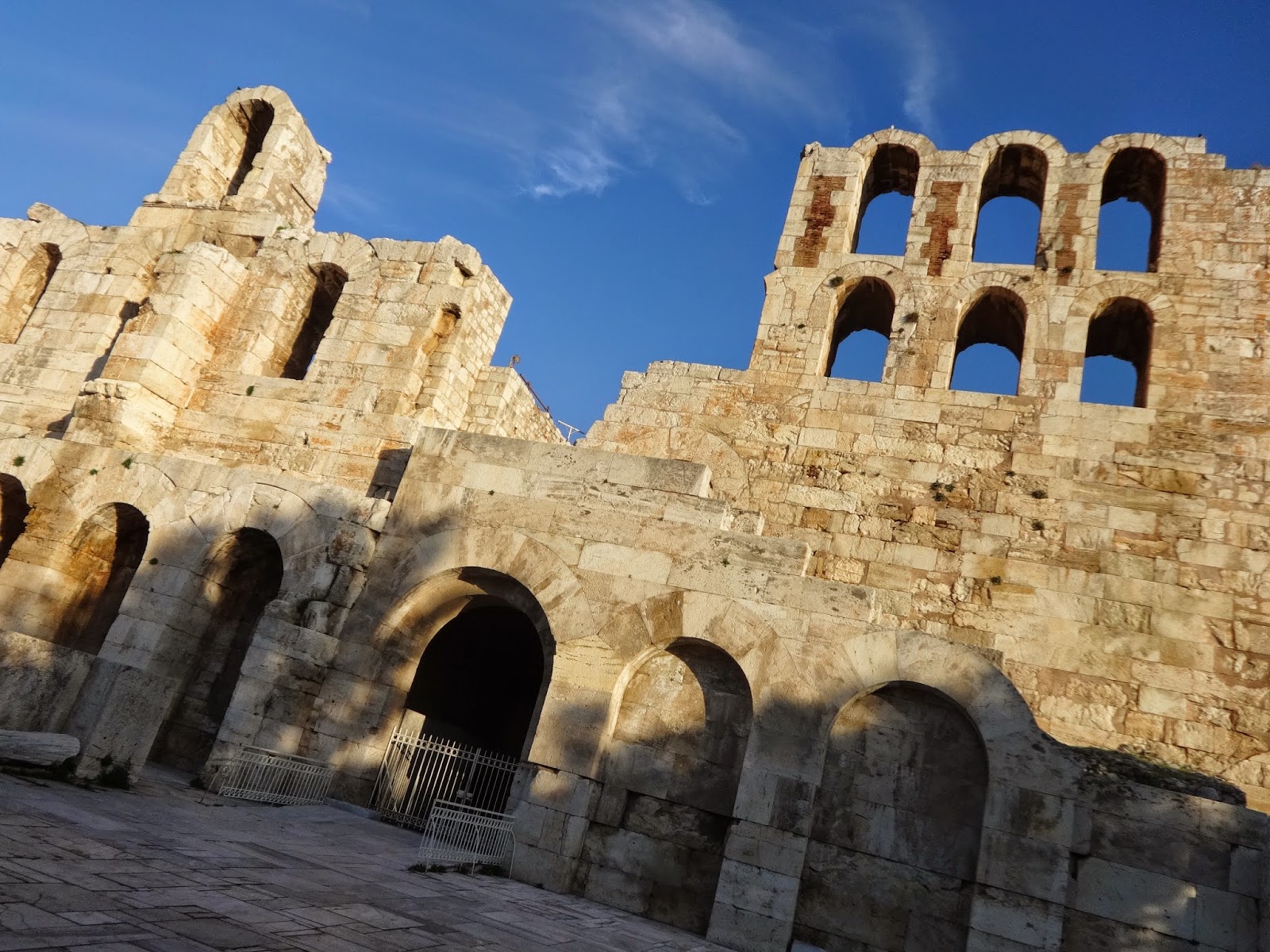 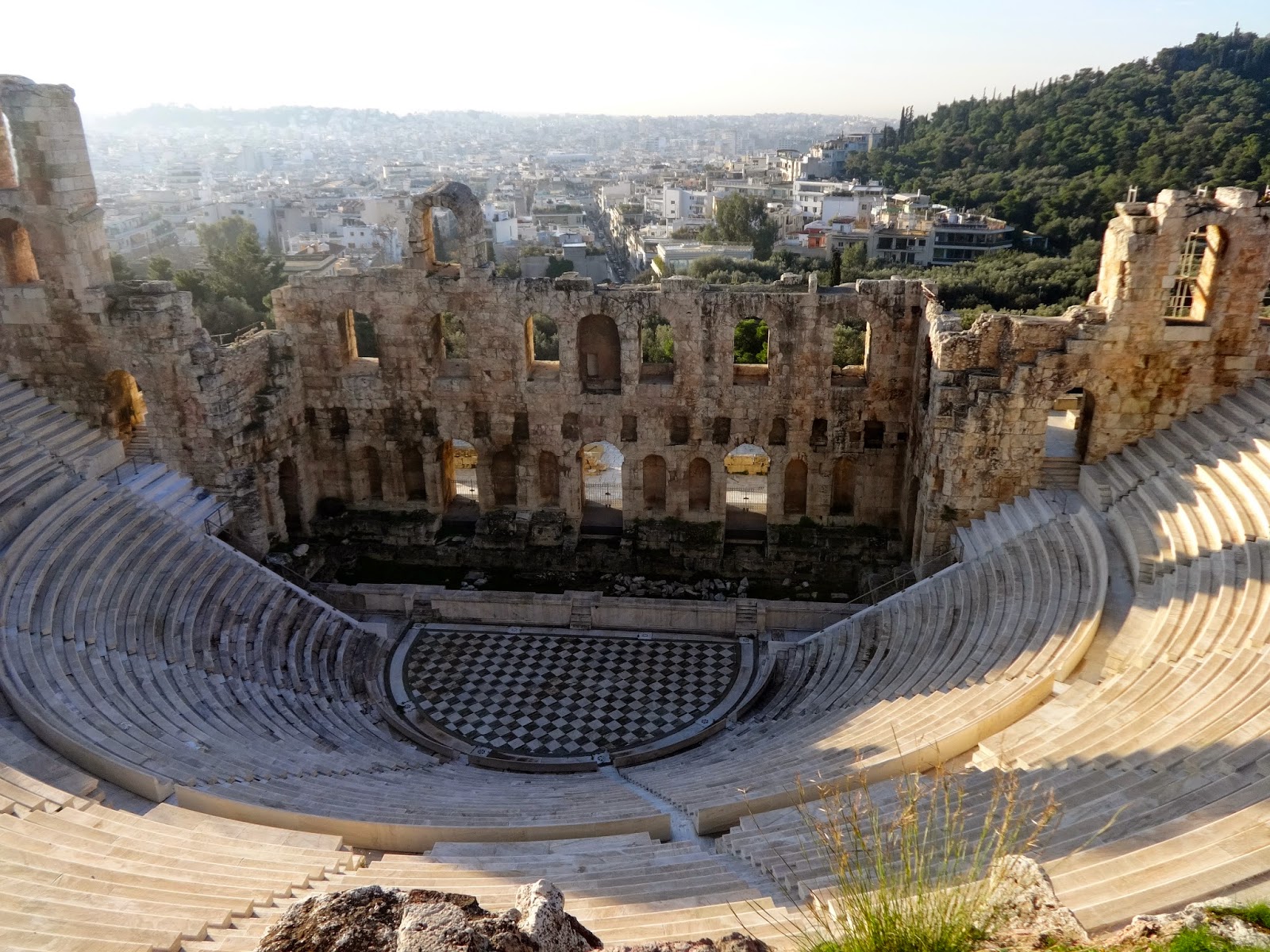 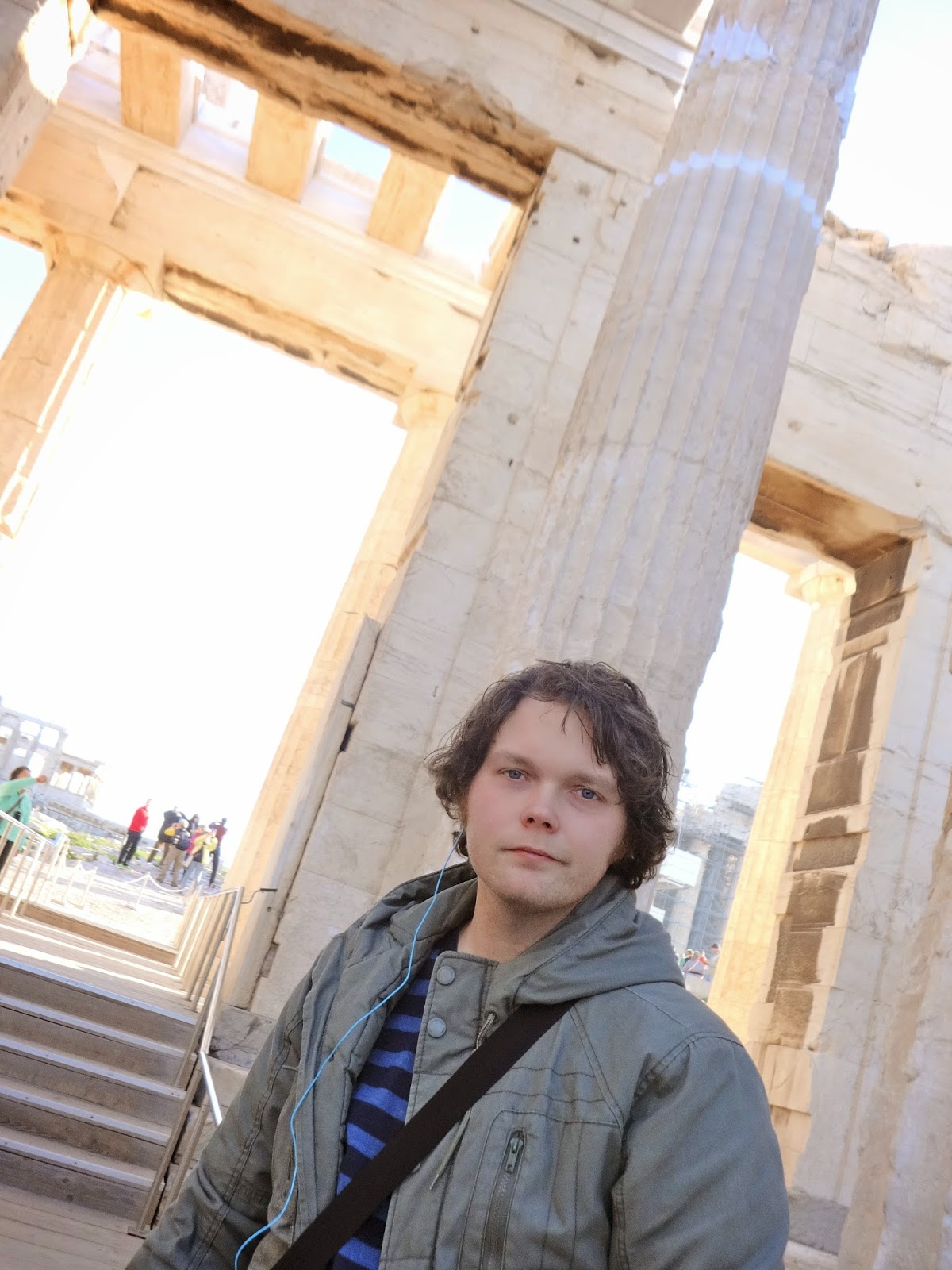 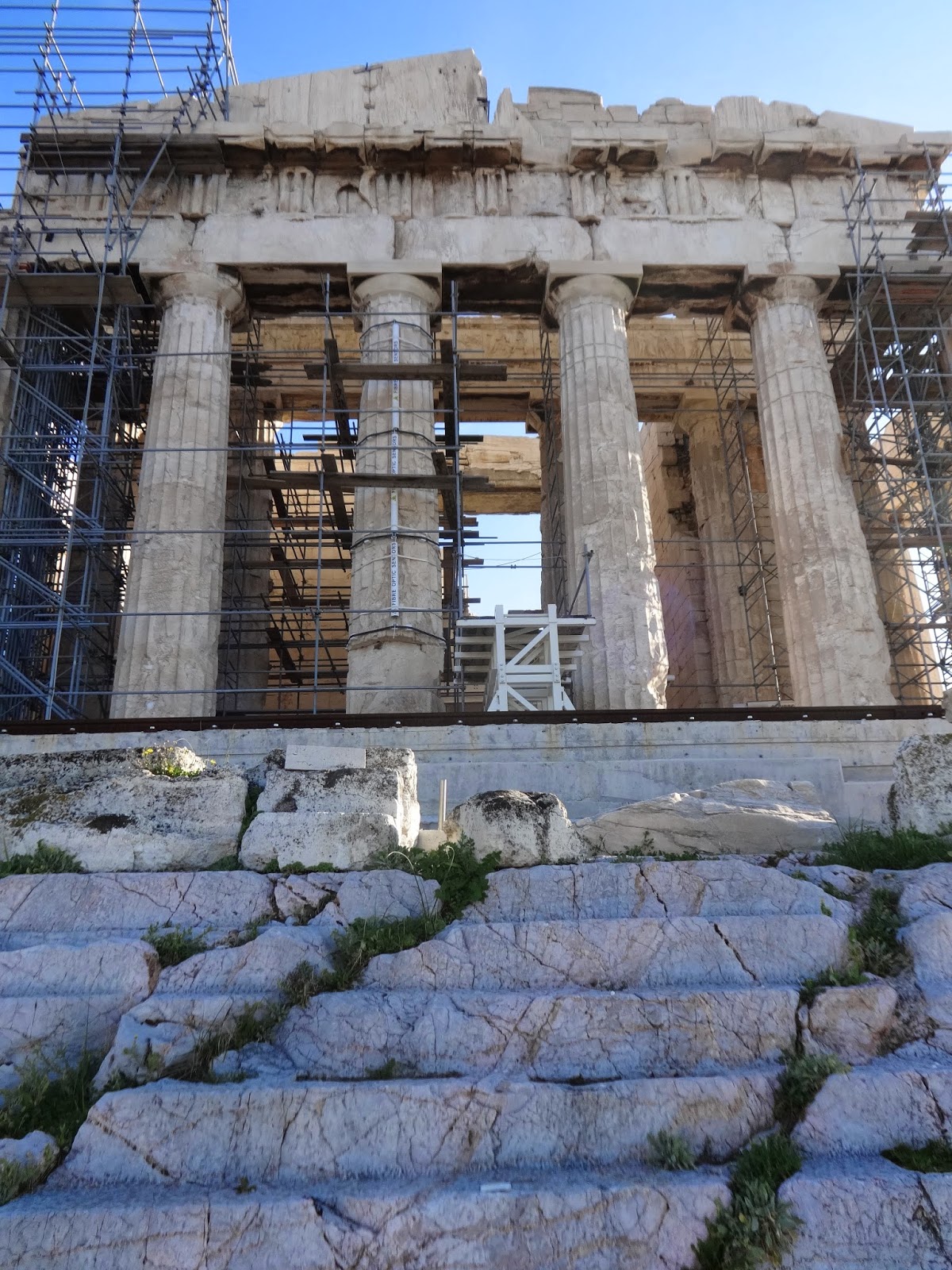 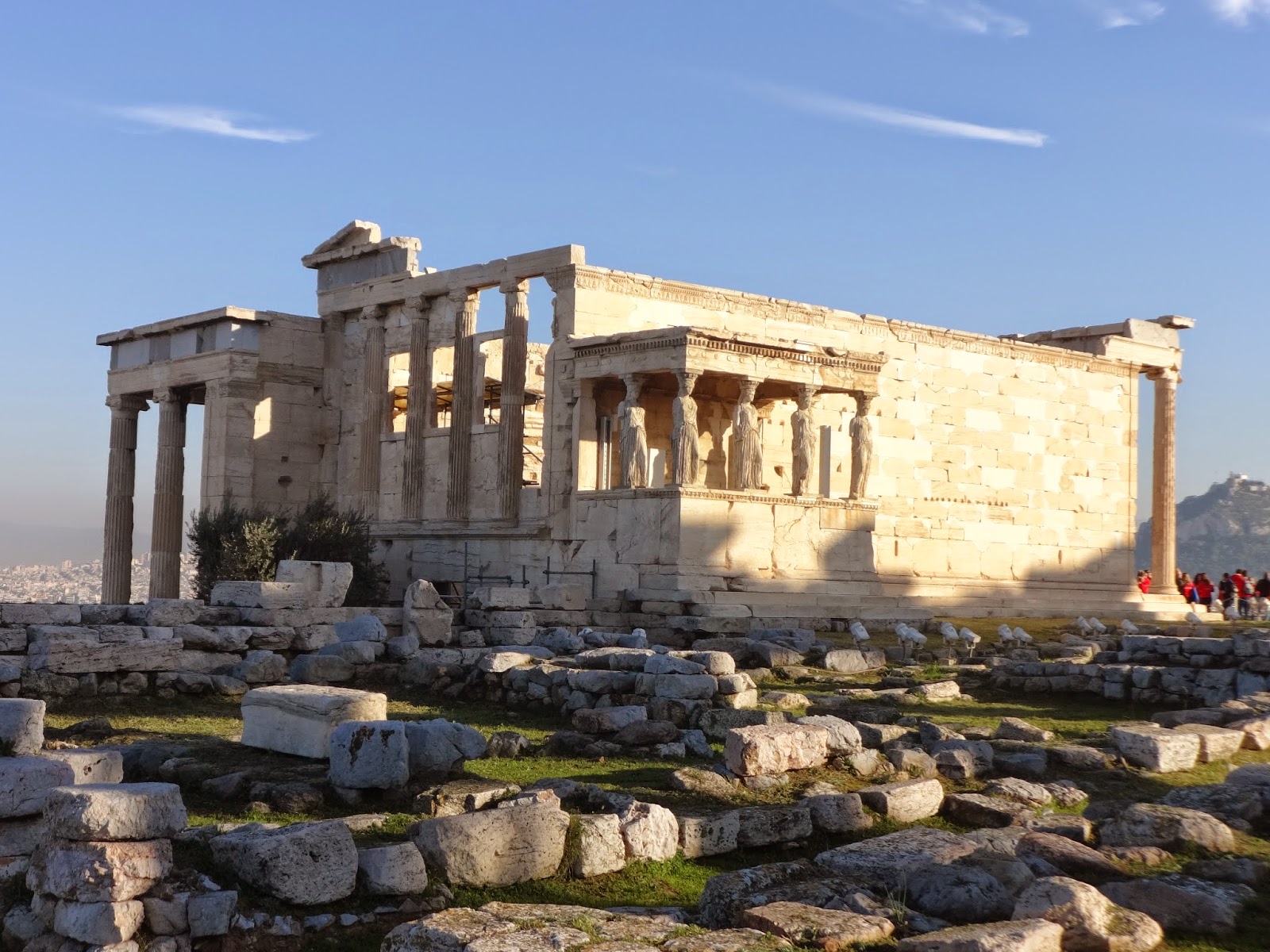 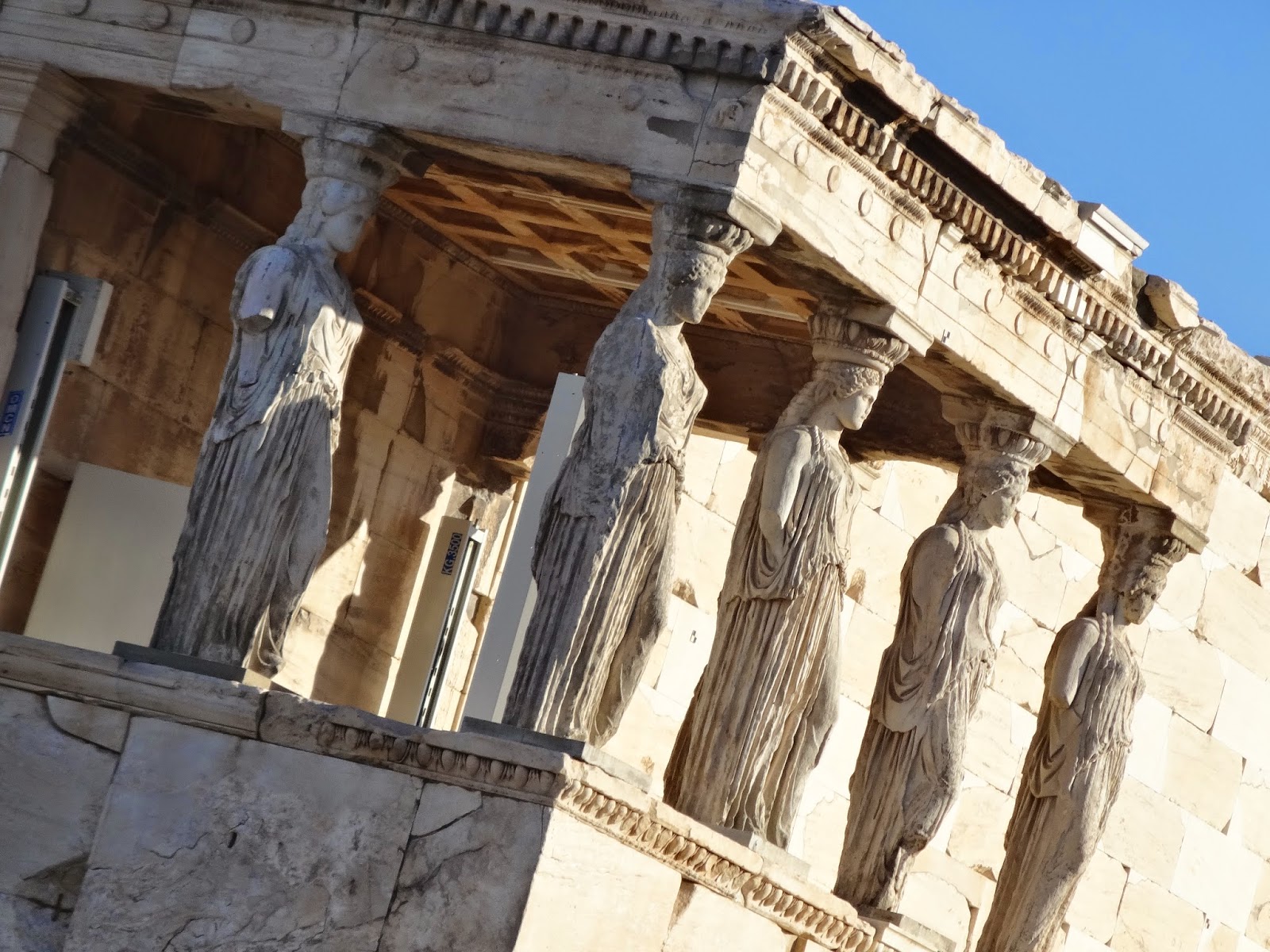 After our tour of the Acropolis, we had a "generous" 20 minutes to wander the area by ourselves before we had to be back on the bus.  I took the opportunity to seek out the Hard Rock Cafe, where I planned to down a Hurricane and buy the mandatory shot glass.  I entered the gift shop and had the following conversation:

Upon returning to the ship that evening, I promptly logged onto the Internet and researched the matter.  Cruise ship Internet is expensive, but some things are worth paying for, dammit.  Apparently, the Hard Rock Cafe in Athens, Greece has been operating without a license since March of 2013…a fact that is not interesting to any of you, but this is my blog and I want to remember the fury when I'm old and gray.

Our next stop was the National Archaeology Museum of Athens, which, between the ruins and the museum, makes our day in Athens pretty much identical to our day in Olympia.  As we were entering,

we ran into this older gay couple that we had met on the boat.  They were leaving, on their way somewhere fabulous I'm sure, and had been having a grand old time all over town.  Seasoned cruise goers, they had opted out of the organized tour and instead found a cab driver that was willing to drive them around all day and wait for them while they did tourist stuff for about $50 USD.  Sounds like a good idea, but I can't get past the fear of being abandoned and unable to find another driver in time for departure.

The museum is the largest in Greece and was originally founded to provide a secure environment for items found during the 19th century excavations in and around Athens.  It grew to become the country's central archaeology museum, and features a large collection of sculptures, vases, and metallurgy. 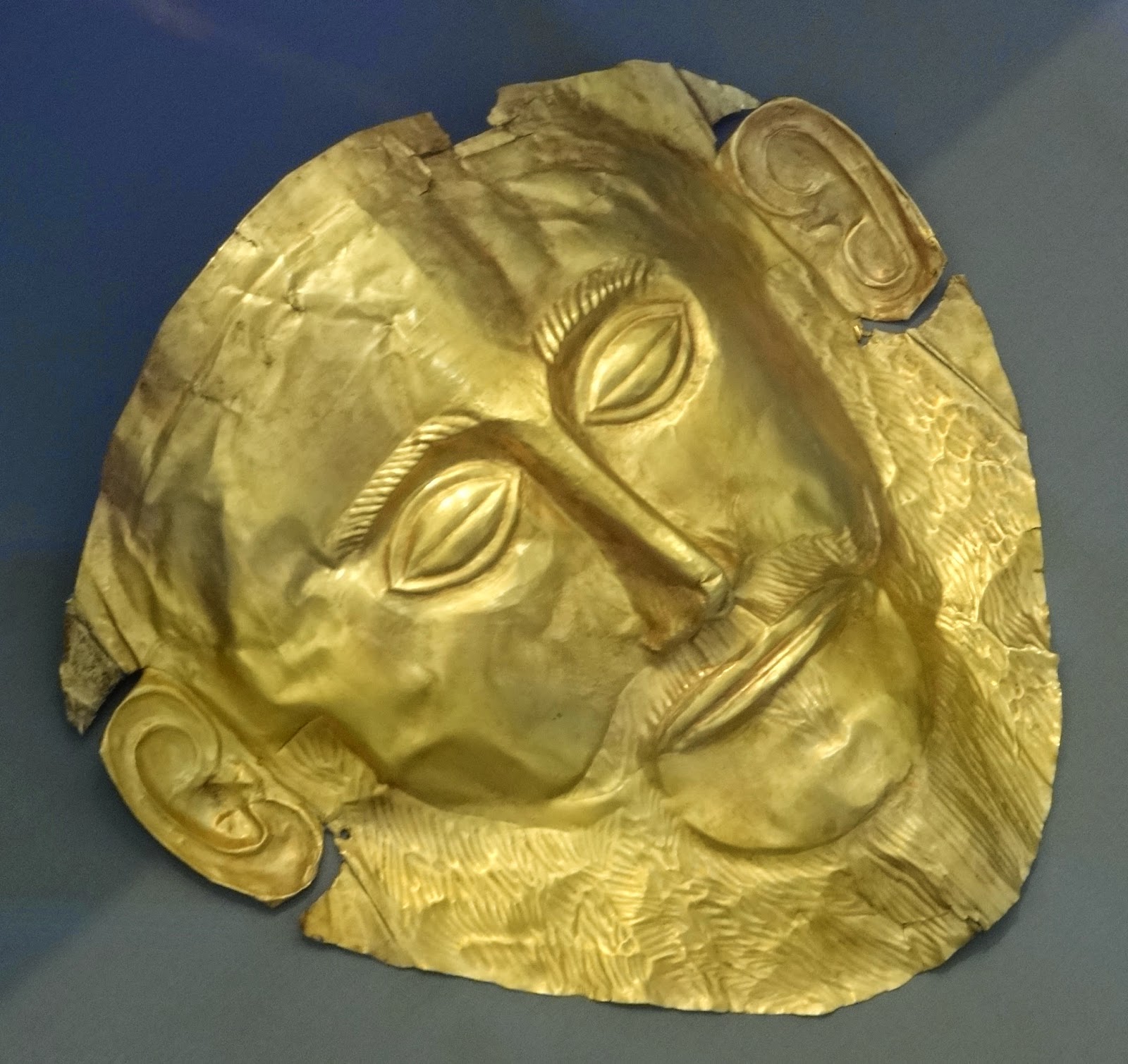 On display in the central gallery is the alleged "Mask of Agamemnon," a gold death-mask depicting the imposing face of a bearded man.  It was found covering the face of a body located in Mycenae in 1876.    Modern research suggests that the mask if from 1550-1500BC, earlier than Agamemnon, who commanded Greek forces during the Trojan War, is traditionally thought to have lived and died.  Is is but one of several such masks on display in the exhibit.

Also of note was this bronze statue, described as begin either Zeus or Poseidon.  I'm not sure where, but I know I've seen it before.  It was discovered in the sea of Cape Artemision and is though to be from the early Classical period, circa 460 BC.  I'm not sure why there is uncertainty about who it is supposed to be, as it looks quite Zeus-y to me. 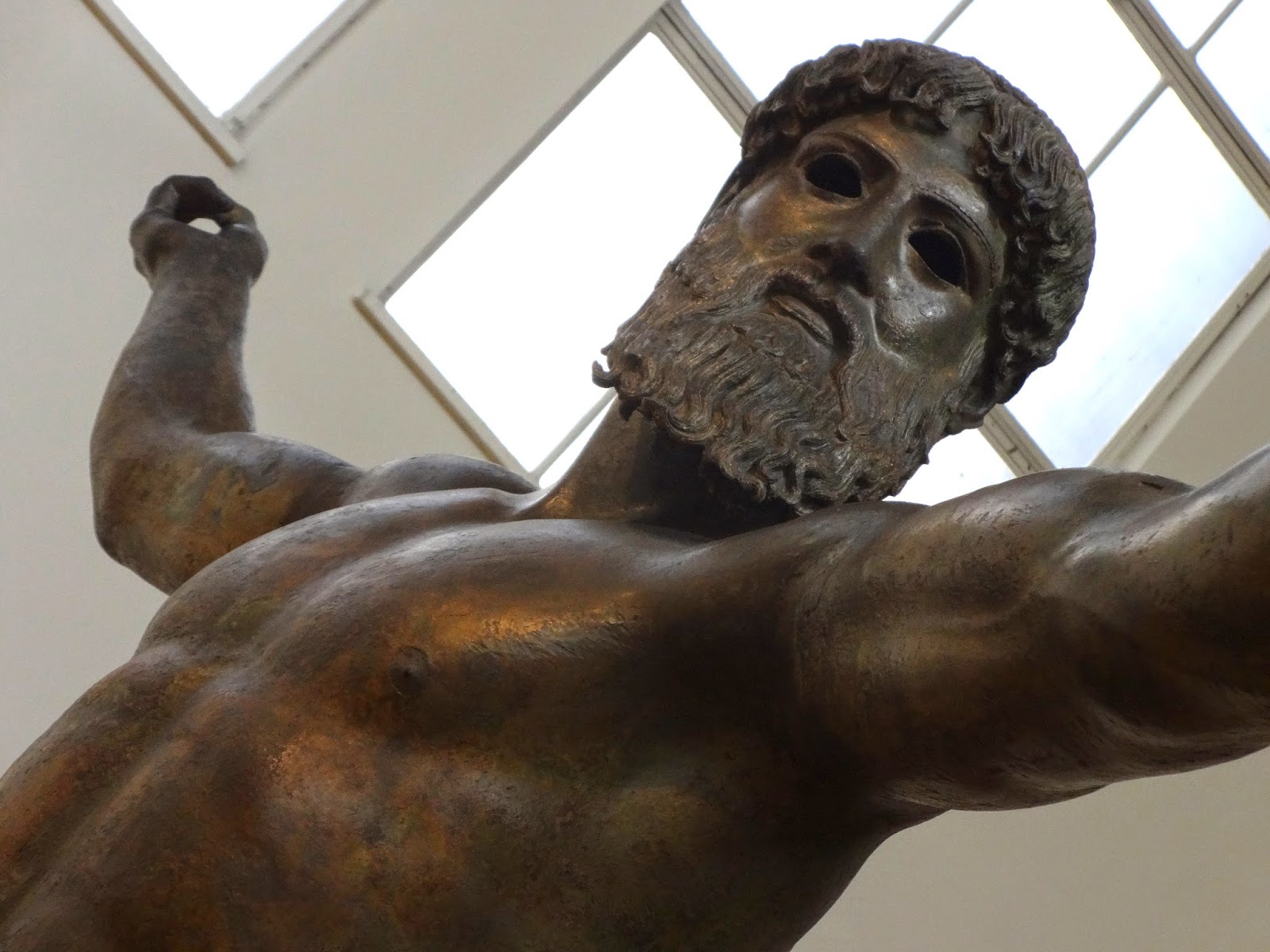 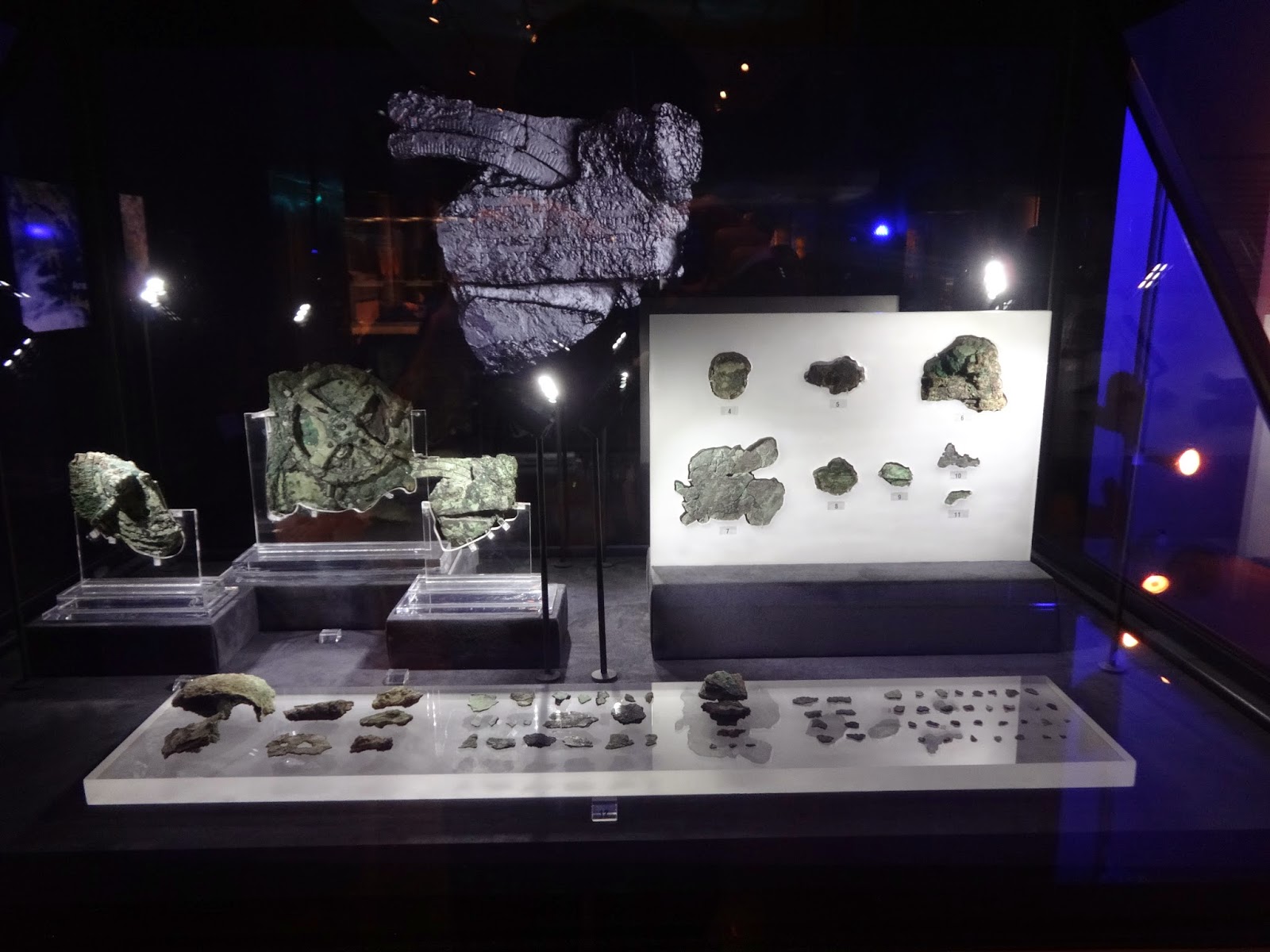 TJ geeked out over the Antikythera Mechanism exhibit, which contains 82 fragments of the mechanism, discovered in 1900 among the ruins of the shipwrecked Antikythera.  A century of research has established that it is the oldest known astronomical and calendrical calculating machine, resulting in the moniker of "World's First Computer."

Other interesting pieces below...as you can tell, I'm an unapologetic fan of sculpture. 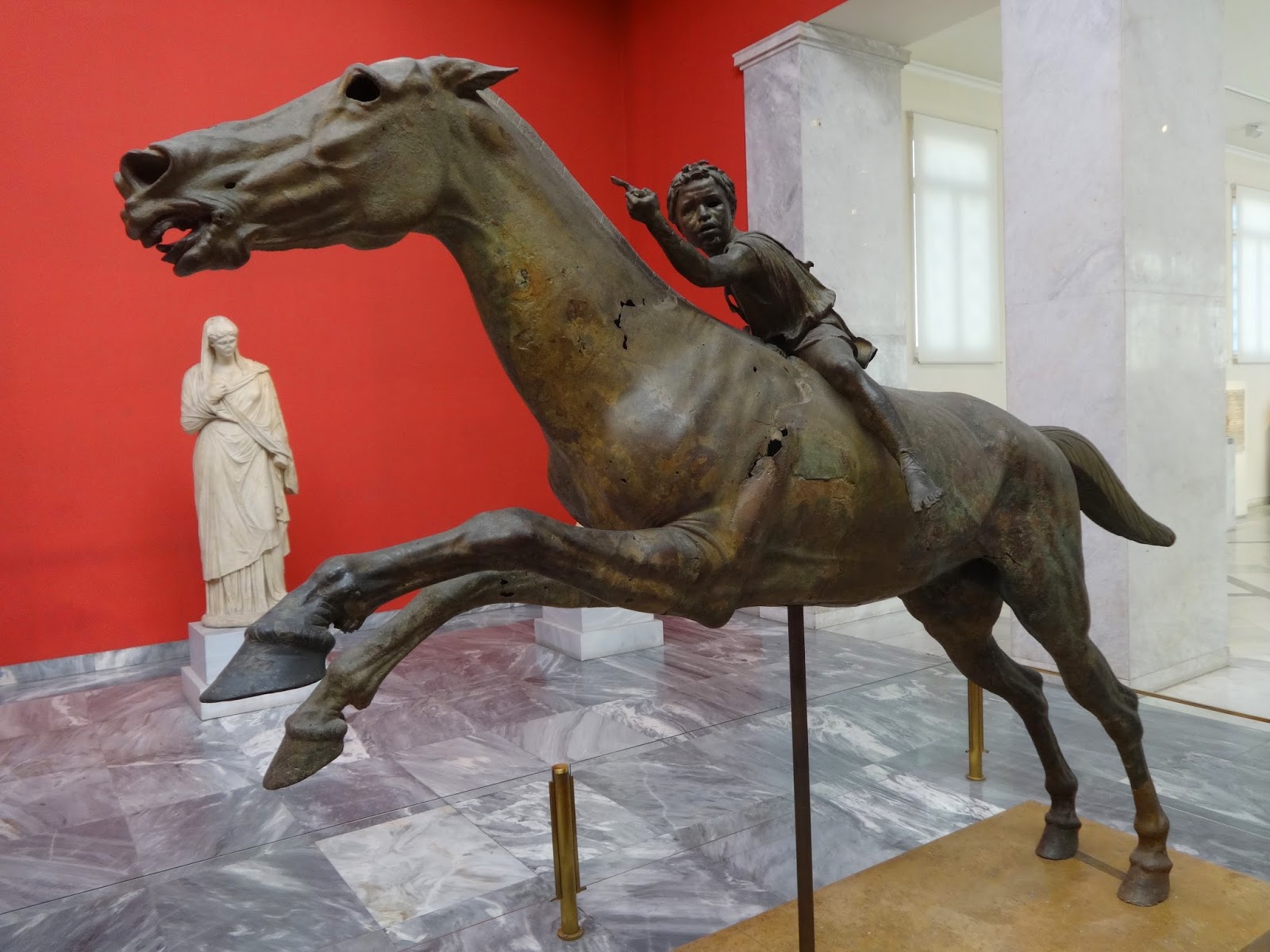 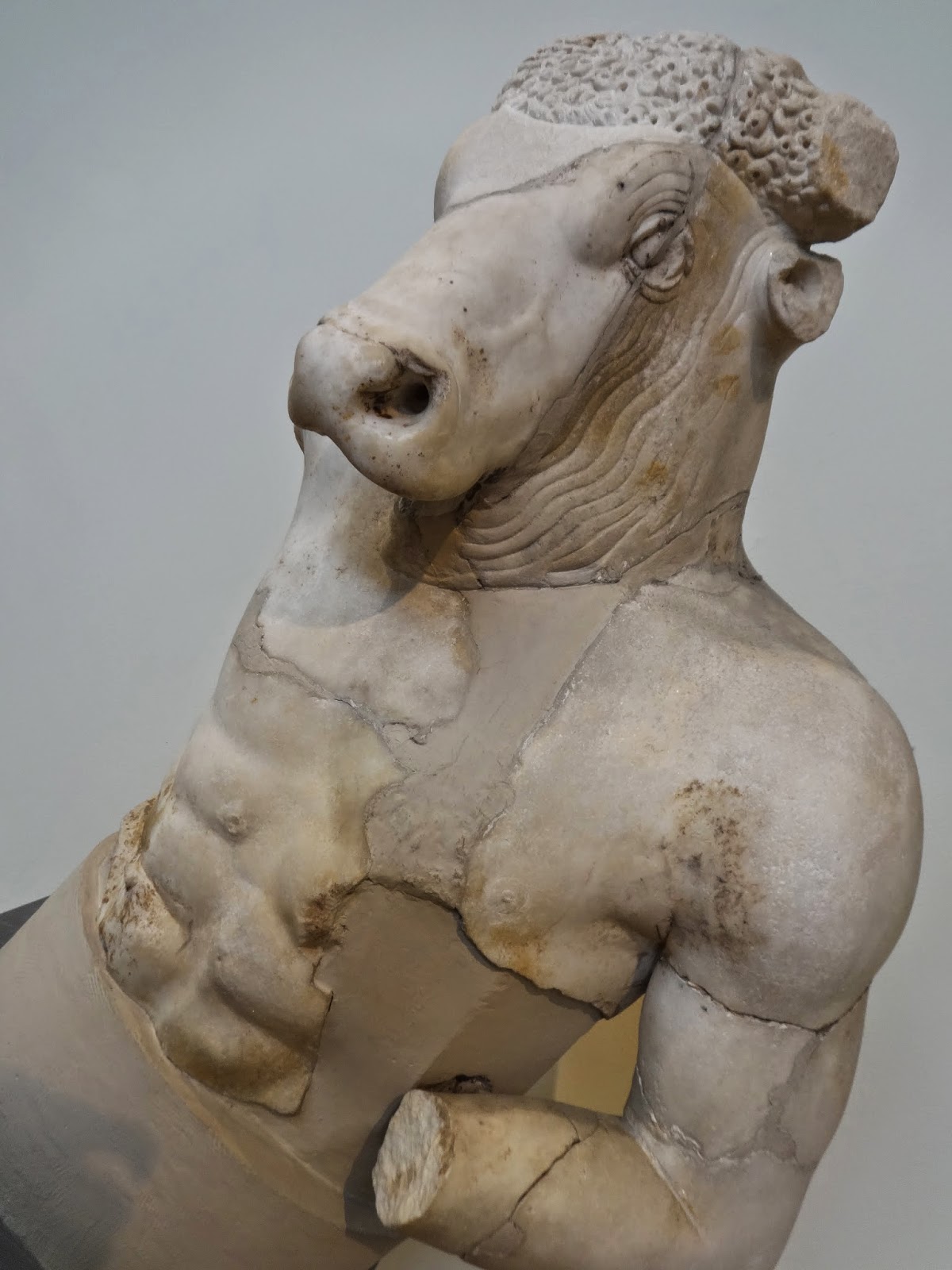 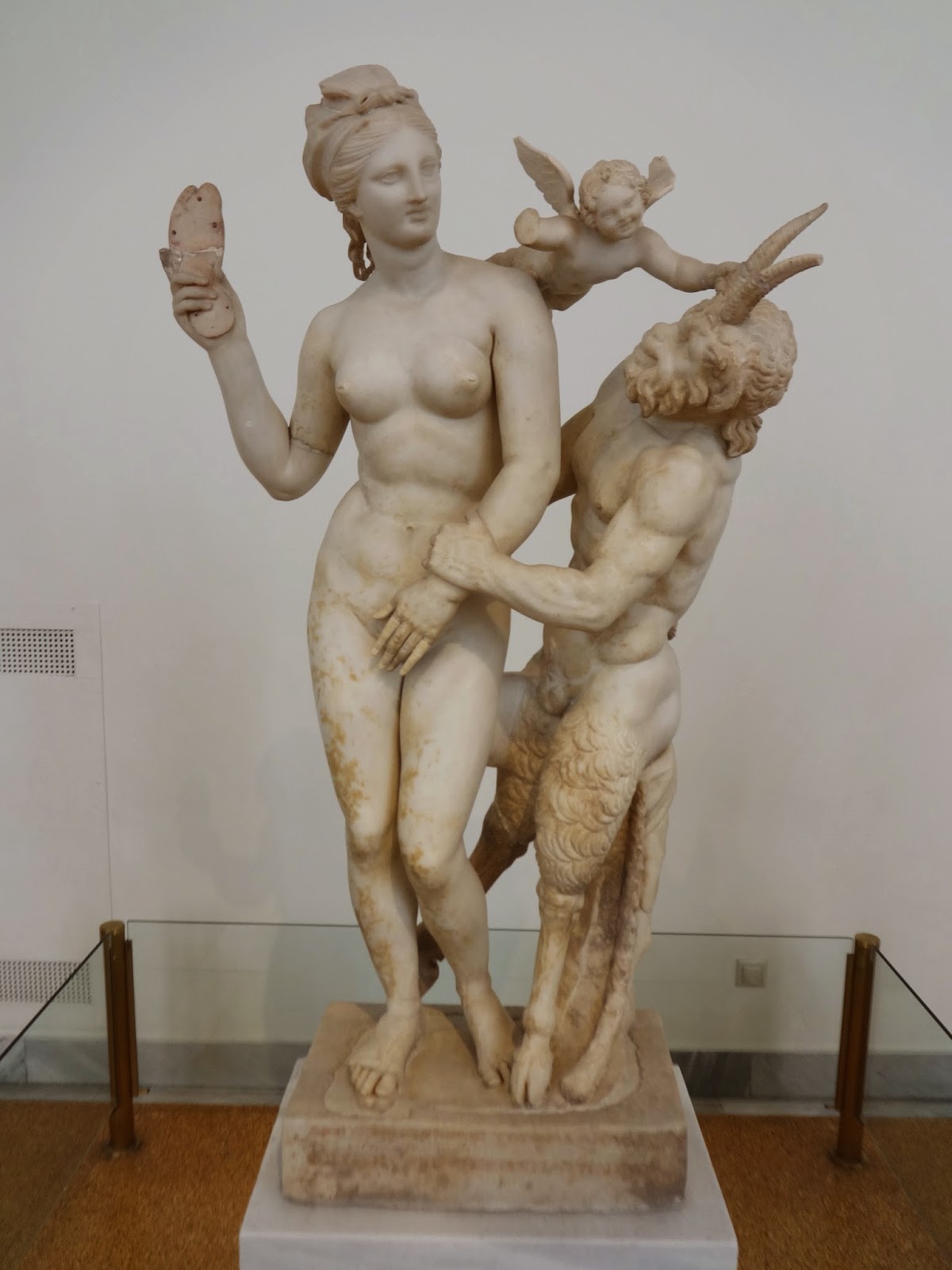 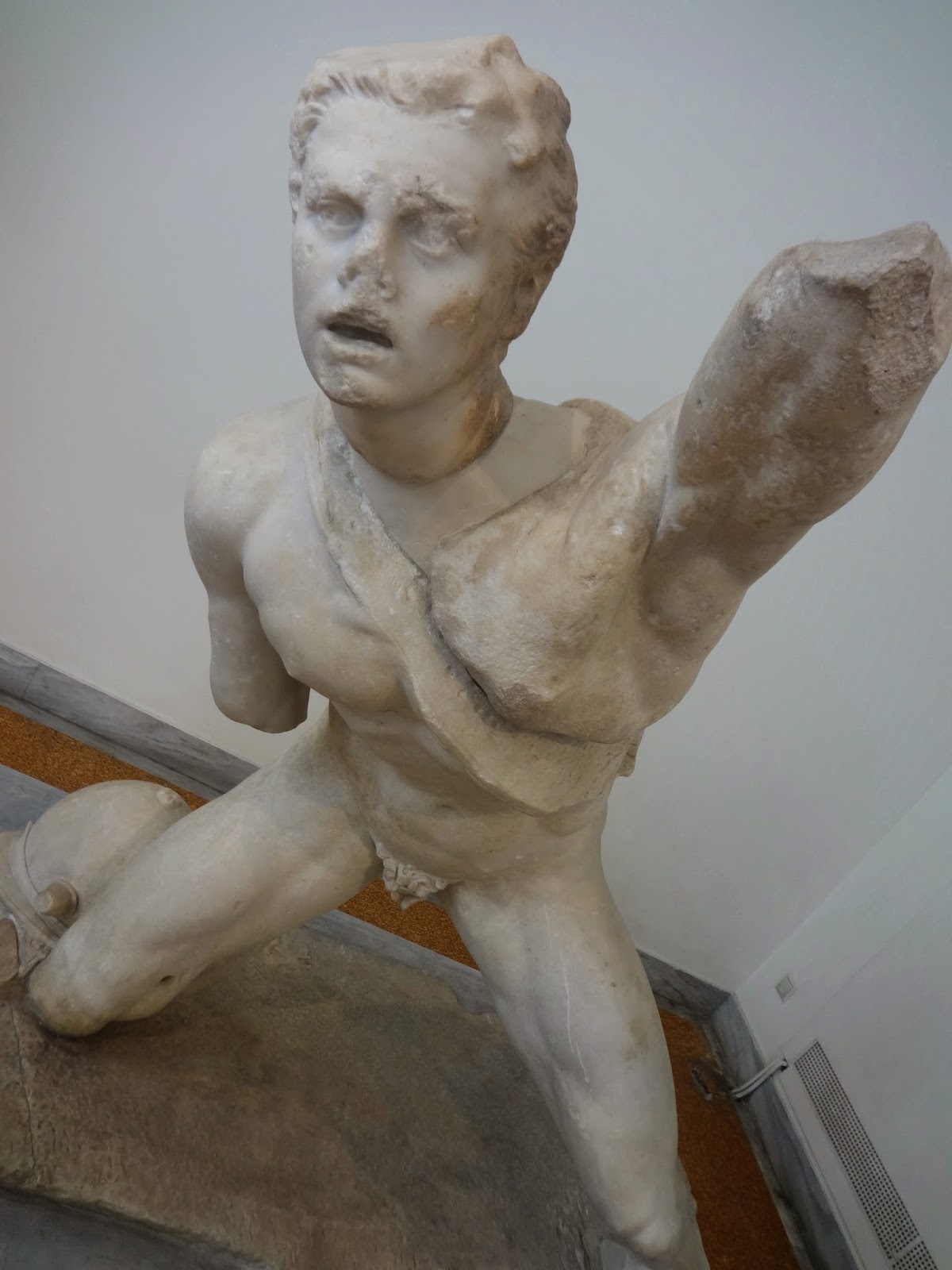 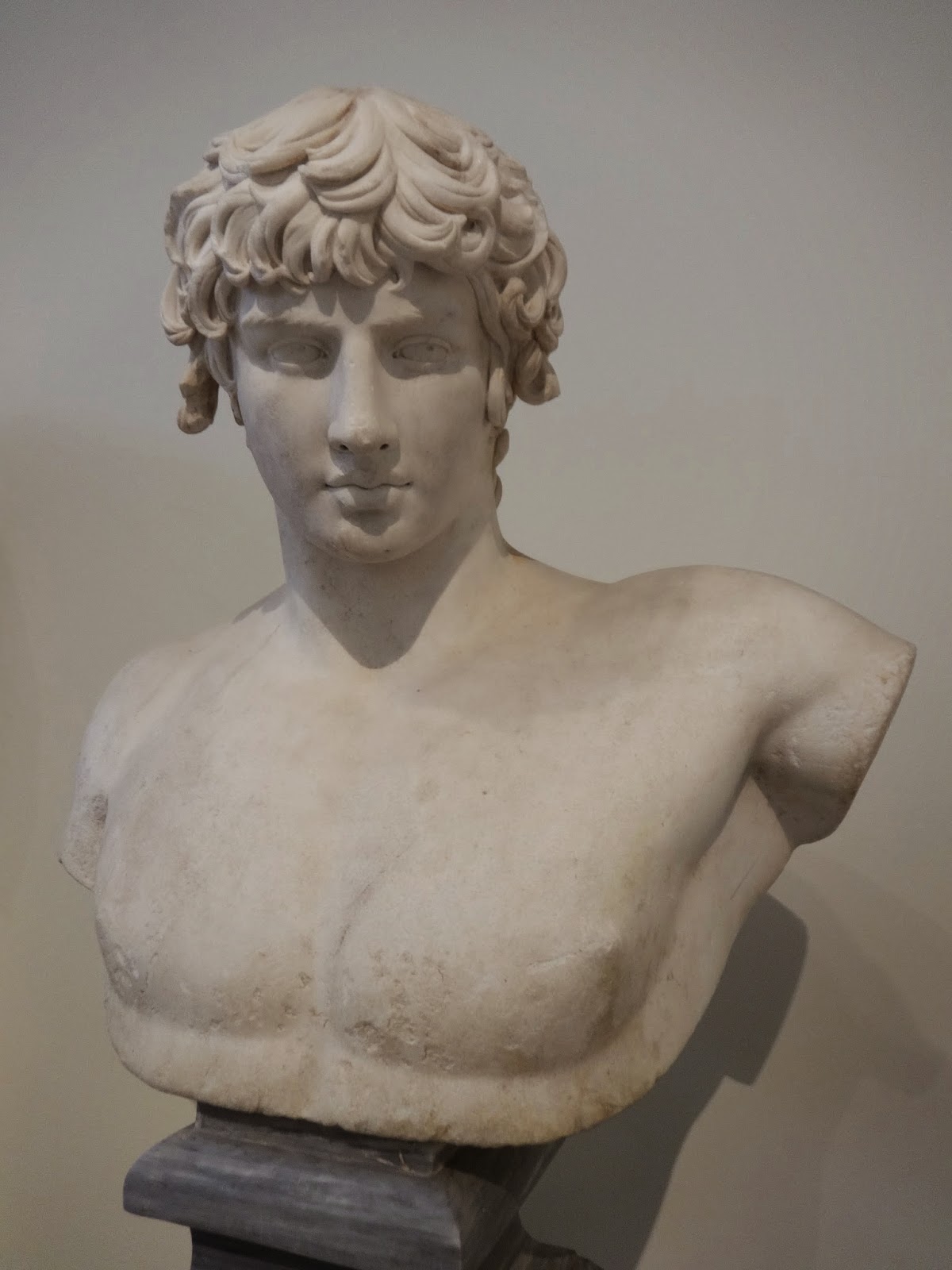 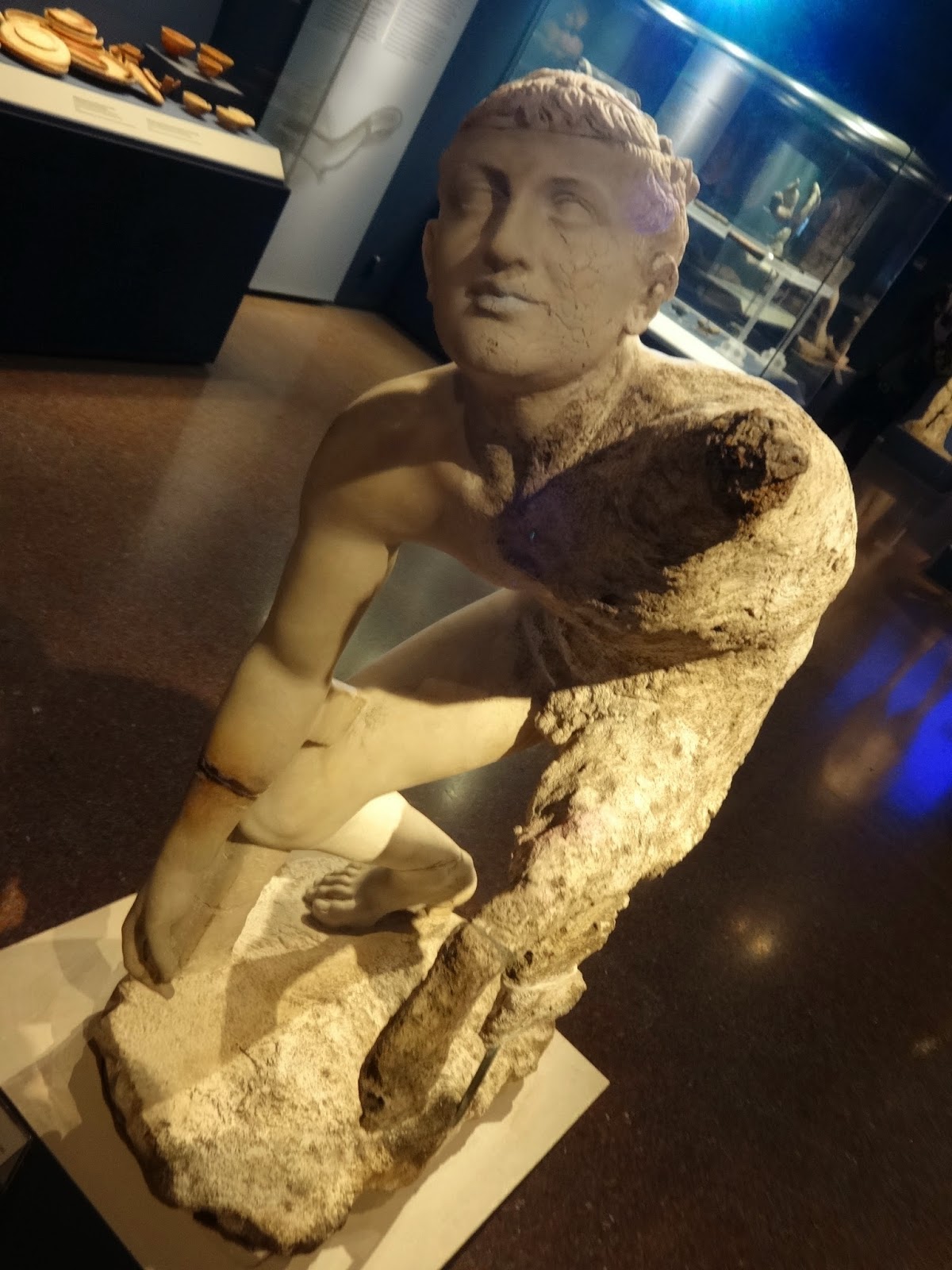 We scoured the gift shop, looking for something that we liked even half as much as the Narcisus we had chickened out of buying at the Vatican, but to no avail.

And with that, as with Olympia, it was time to head back to the ship.

The dawn would bring with it another port, and another country. 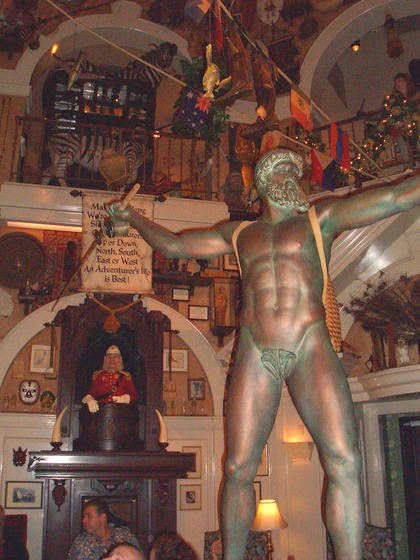 [EDIT]:  TJ has advised that the reason the statue of Zeus/Poseidon looked so familiar is because there was a replica of it at Walt Disney World's now defunct Adventurer's Club.  It was a themed club located within the much-missed Pleasure Island nightclub complex at Downtown Disney.  The setting was 1937, and the gist was that world travelers would gather here to tell tales of their explorations.  The sculpture, fishing pole held in the casting position, was entitled Zeus Goes Fishing.  Located in the club's Main Salon, the sculpture provided irrefutable proof that this is indeed a sculpture of Zeus, not Poseidon.  Who needs archaeologists when you have Disney Imagineers?