Our friend Aviv, a tour guide by profession that had already shown us a splendid time in Ramla, invited us along for another day trip outside of Jerusalem on Saturday, January 25th.  He asked what we would like to see and, fresh off of our honeymoon travels, I requested something that would be a little light on archaeological ruins.  He thought on it for a while, and this is what he came up with. 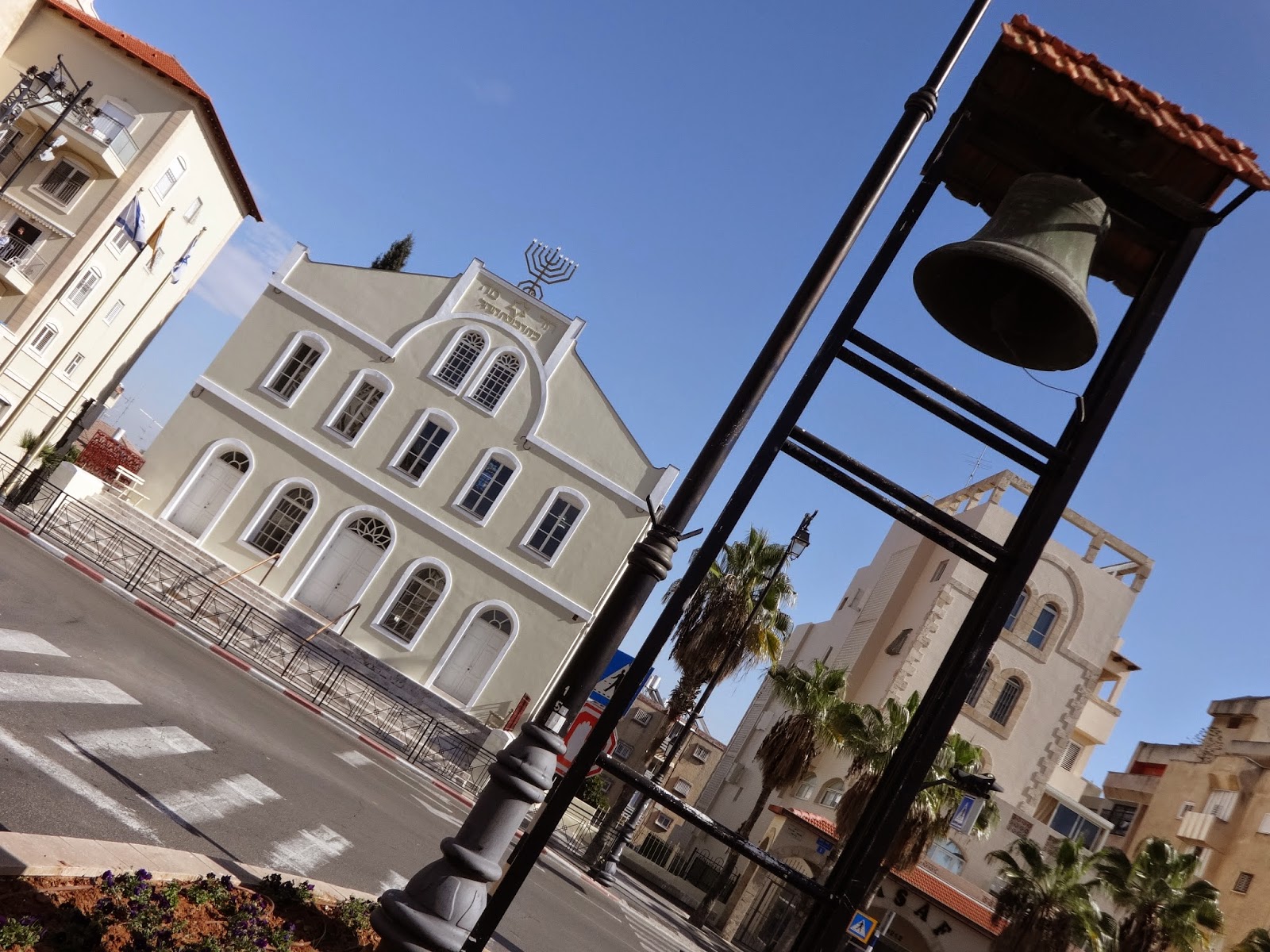 Rishon LeZion was founded at the top of a hill where 17 founding families arrived on July 31, 1882.  They were early Zionist-era Ukrainian Jewish immigrants, and this weed-infested, deserted hill became the center of heir flourishing village.  Around Founder's Square private homes were built as well as the synagogue, pharmacy, post office, village bell, a stage coach station, and a school.

Rishon LeZion literally translates as "First to Zion" in Hebrew, and is derived from Isaiah 41:27 - 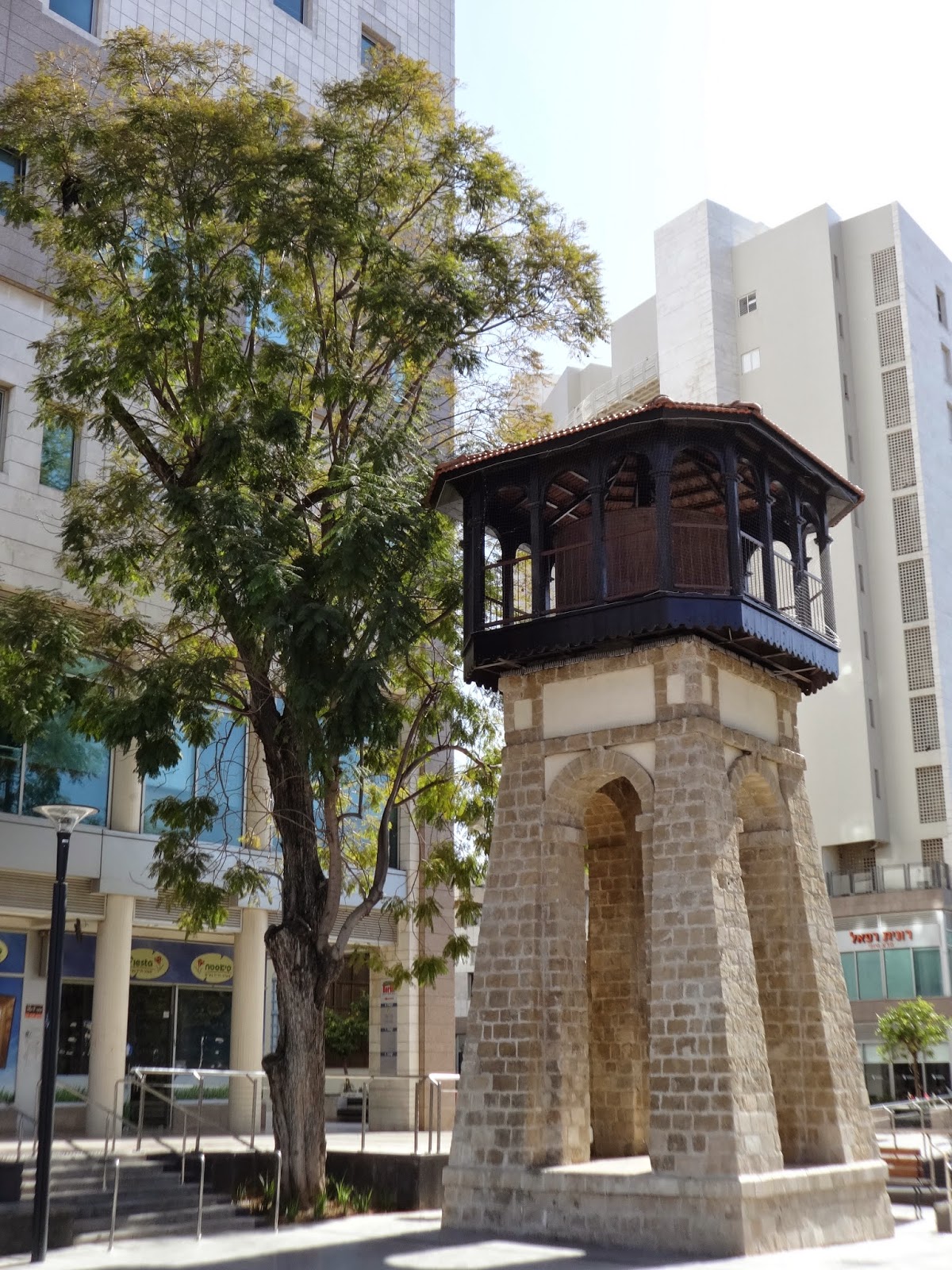 "First to Zion are they, and I shall give herald to Jerusalem"

The city was founded on July 31, 1882 when early Zionist-era Ukranian pioneers purchased 835 acres of land southeast of present-day Tel Aviv.  Sandy soil, scarce water, and a lack of agricultural knowhow made for tough goings at first.  Word was sent to Europe that assistance was needed, and Baron Edmond de Rothschild of France stepped up to provide financial assistance to the poorer families and helped complete the digging of The Well that would assist with the town's water troubles.  Today, the site of this important well is commemorated by…a McDonalds. 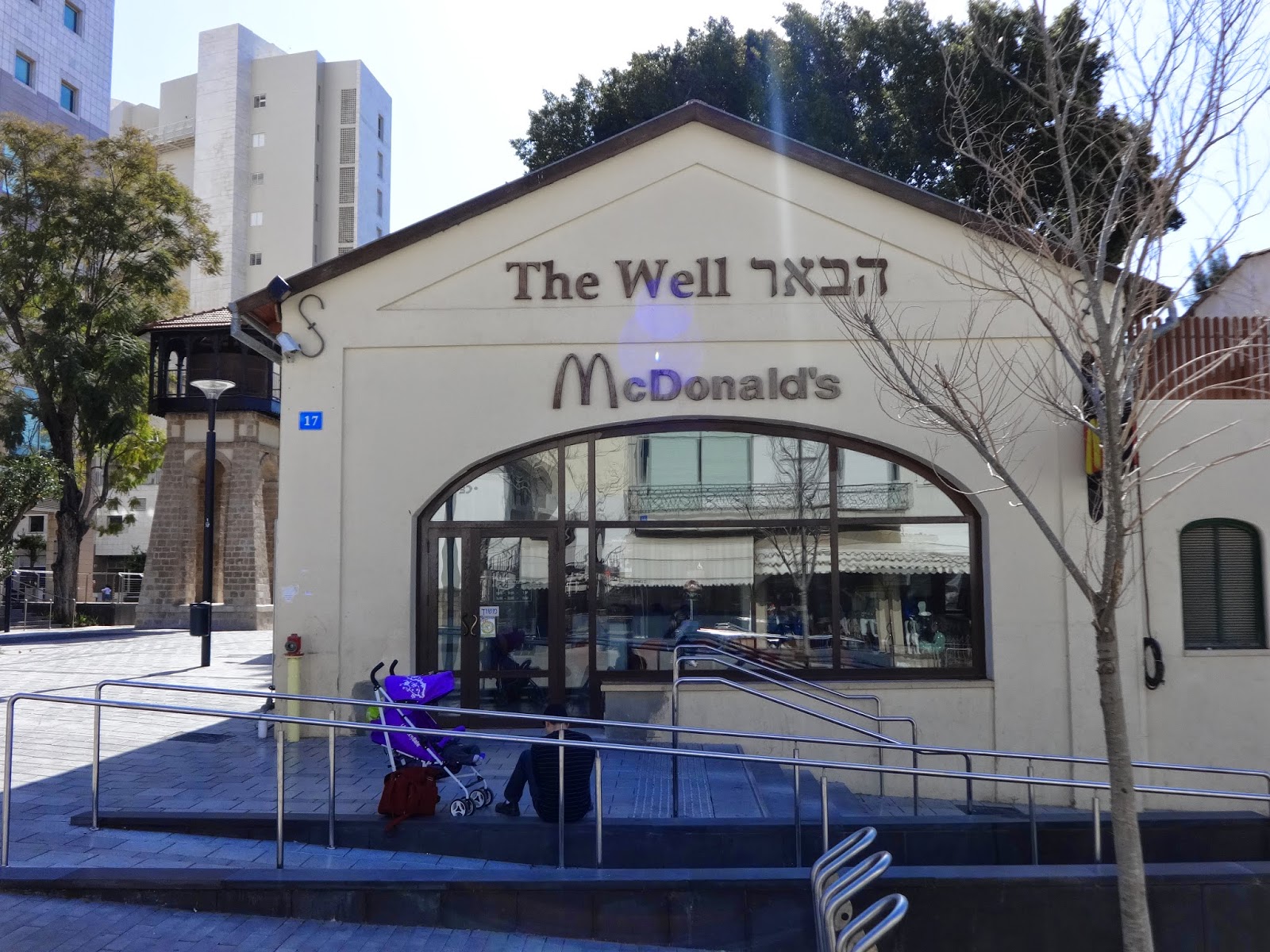 You can't make this stuff up, folks. 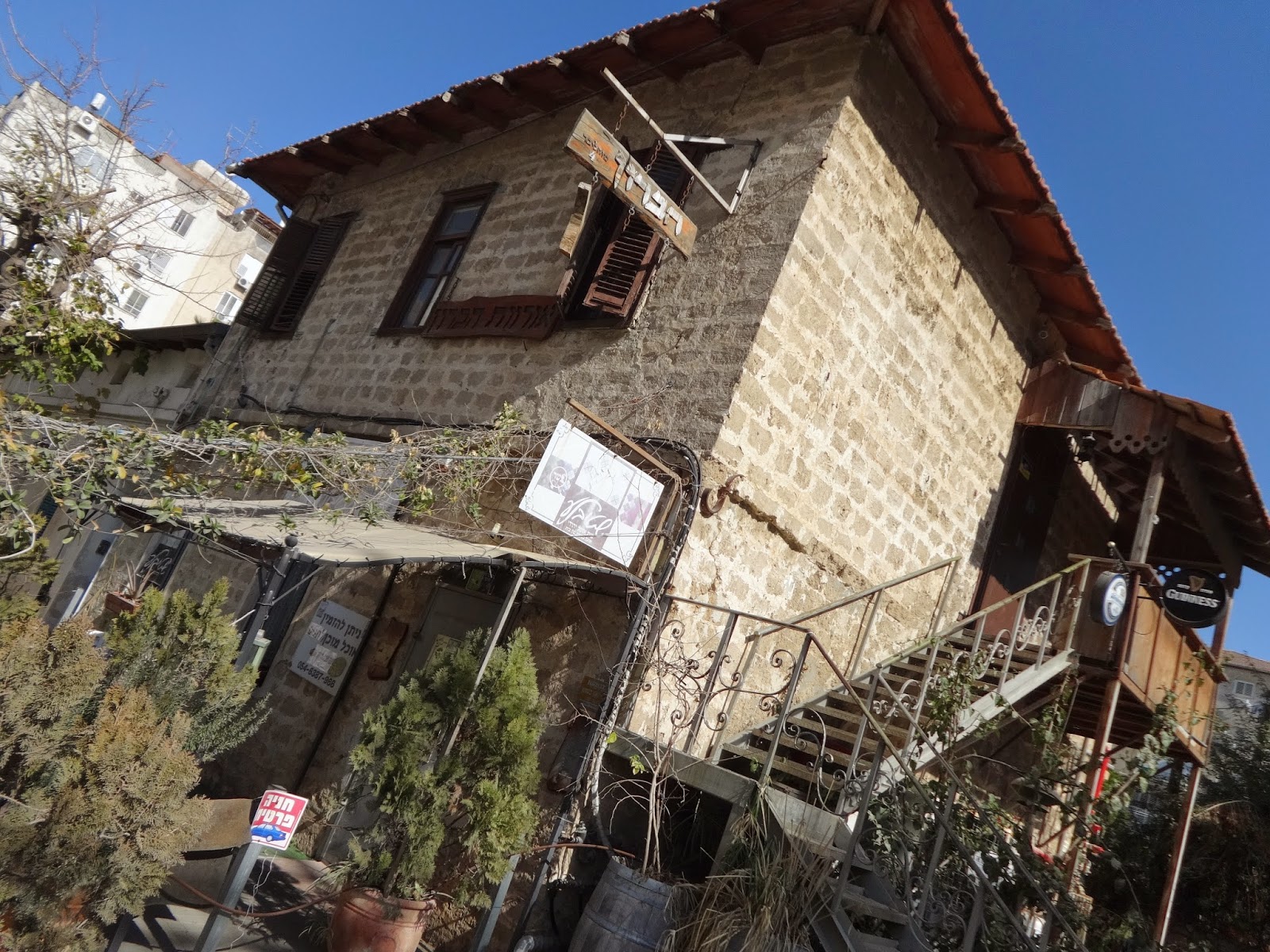 Baron Rothschild's presence in Rishon LeZion continued beyond his initial investment.  The First Administration House (left) was built in 1883 and served as the home and office of the Baron's chief administrator.  Stables and housing for the Baron's employees were located nearby.

Despite being comprised of land purchased from the Arab township of Ayun Kara, Jews and Arabs are said to have lived amicably under Rothschild's administration.  In a 1934 letter to the League of Nations, Rothschild stated that "the struggle to put an end o the 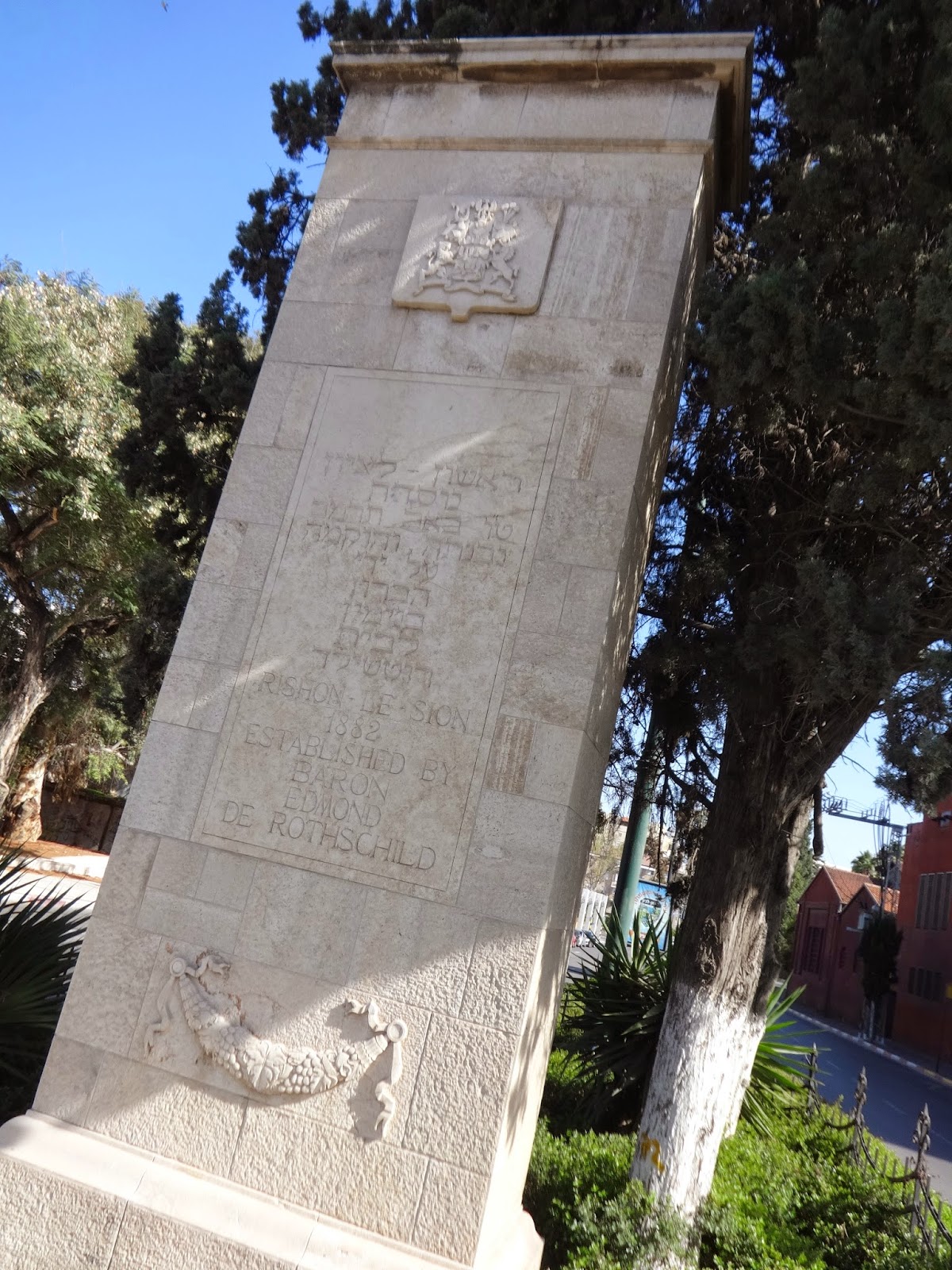 Wandering Jew could not have as its result, the creation of the Wandering Arab."

Under the supervision of Rothschild's administrators, farm colonies and vineyards were established, and two major wineries were opened in Rishon LeZion and Zikhron Ya'akov, near Haifa.  Rothschild spent an estimated $50 million supporting the settlements and researching methods of providing electricity to the settlers.

A monument to Rothschild (left), stands near the Rishon LeZion Winery.  A plaque reads "This memorial is a token of thanks for the great contribution made by the Baron Rothschild to the resettlement of the Land of Israel.  In Rishon Le-Zion, the Baron financed the digging of the first well, helped in training the farmers, established the winery, built and supported the school, pharmacy and clinic. The Baron was supported throughout by his wife, the Baroness Adelaide."  Hm.  You'd think the guy earned more than that lump of stone, eh?

Being that it was Saturday, the Sabbath was in full swing and the winery was closed (which, if nothing else, provides a wonderful excuse for a return visit).  The walls surrounding the winery were still worth a visit, though.  Mosaic pictures placed on the winery walls attempt to make a connection between old and new, joining Rishon LeZion's history with the modern techniques of the city's young artist community.  The project was initiated by The Municipality of Rishon LeZion's Special Projects Office for the Environment and Preservation of Historic Sites in collaboration with the Museum of Rishon LeZion.  Students from several local Junior High Schools participated in the creative experience, guided by artist Yael Portugheis. 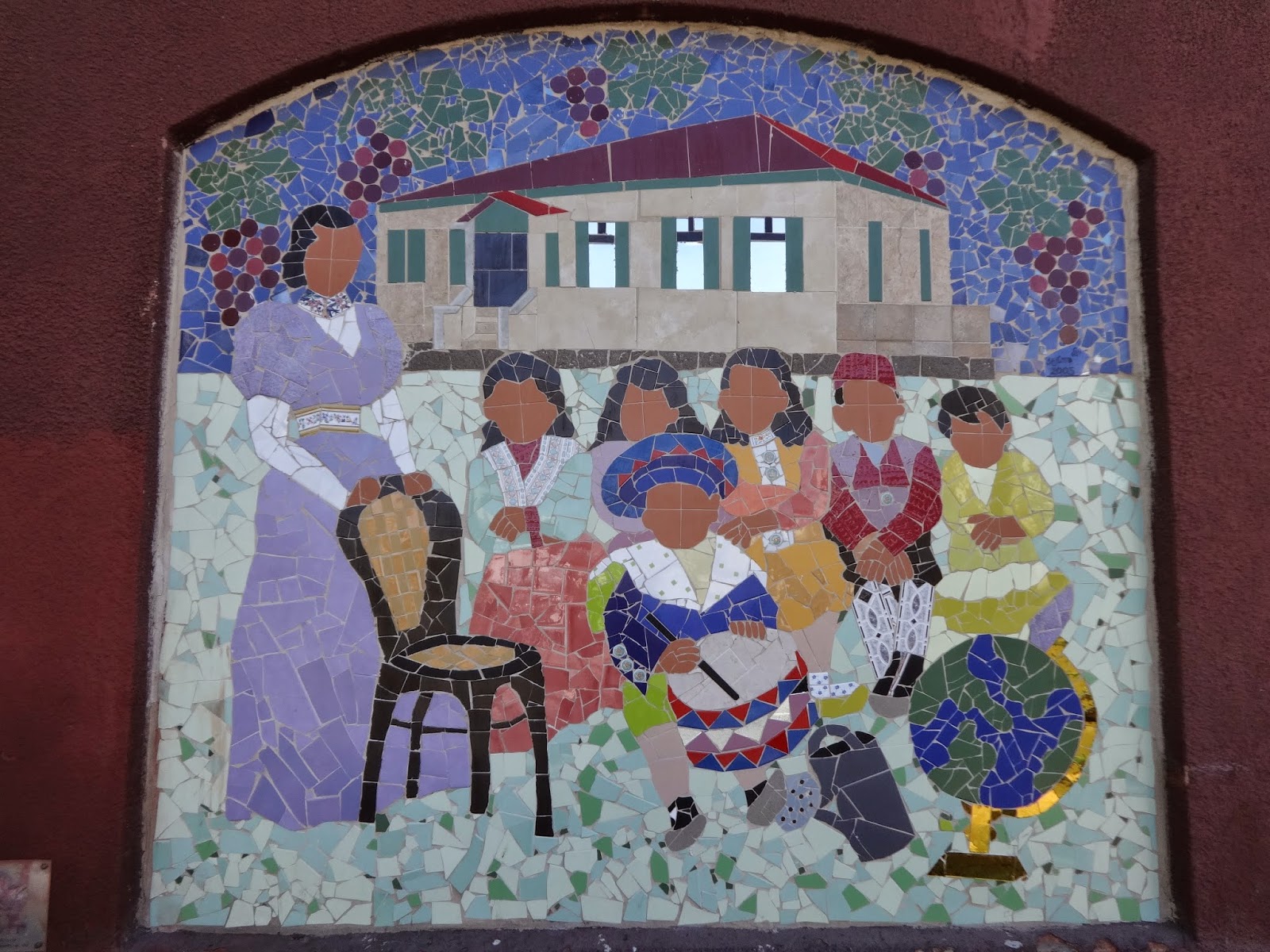 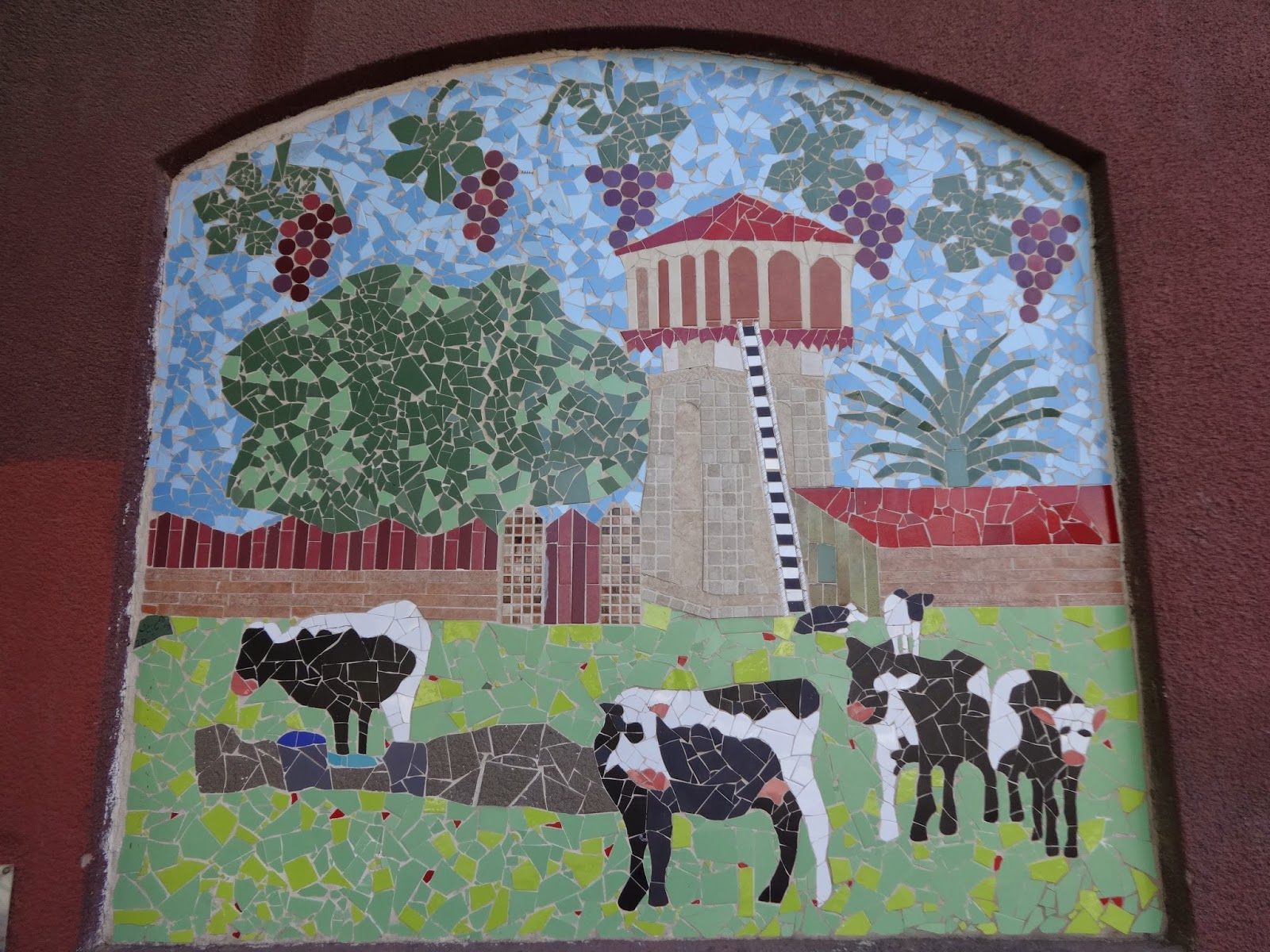 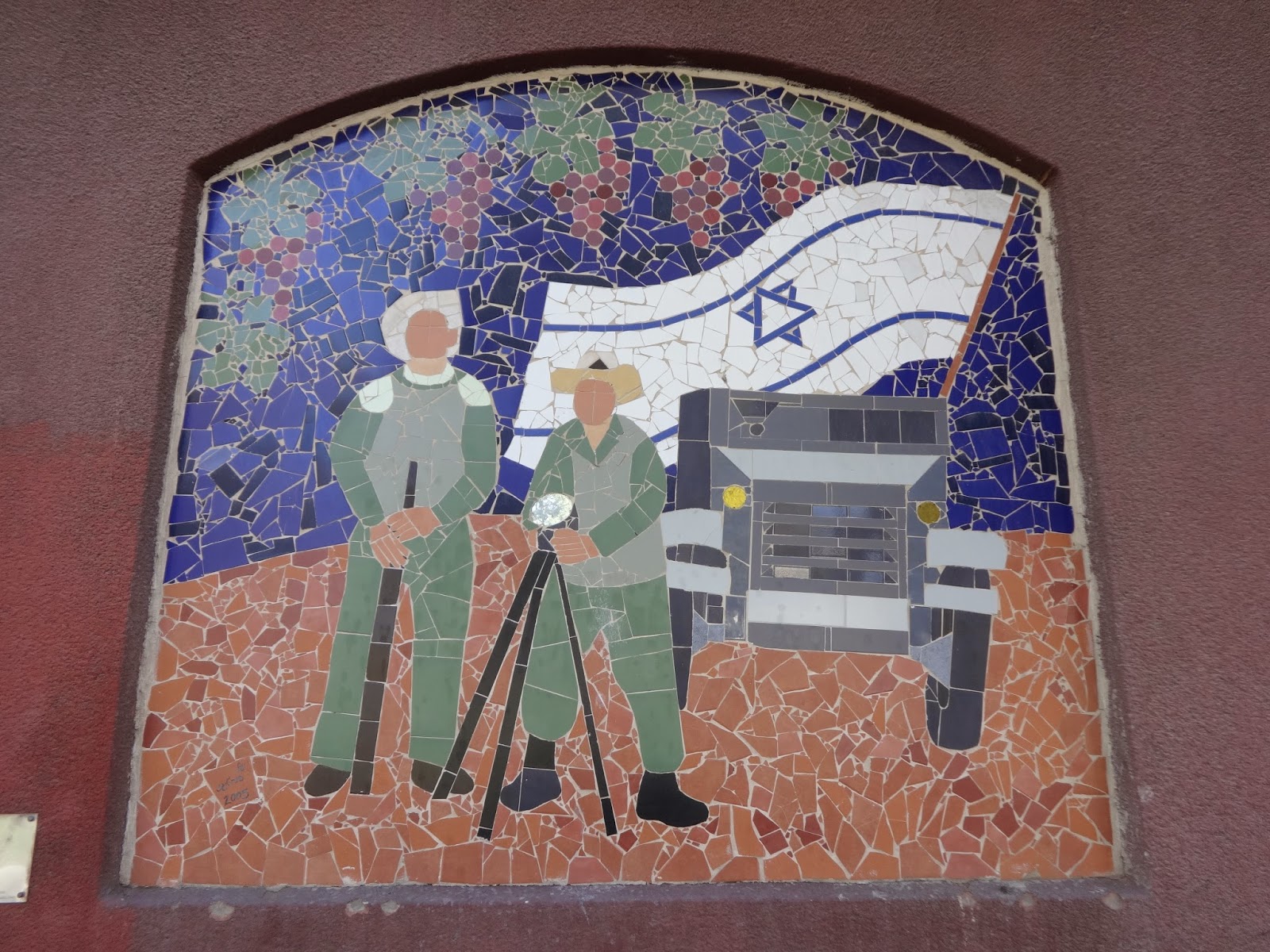 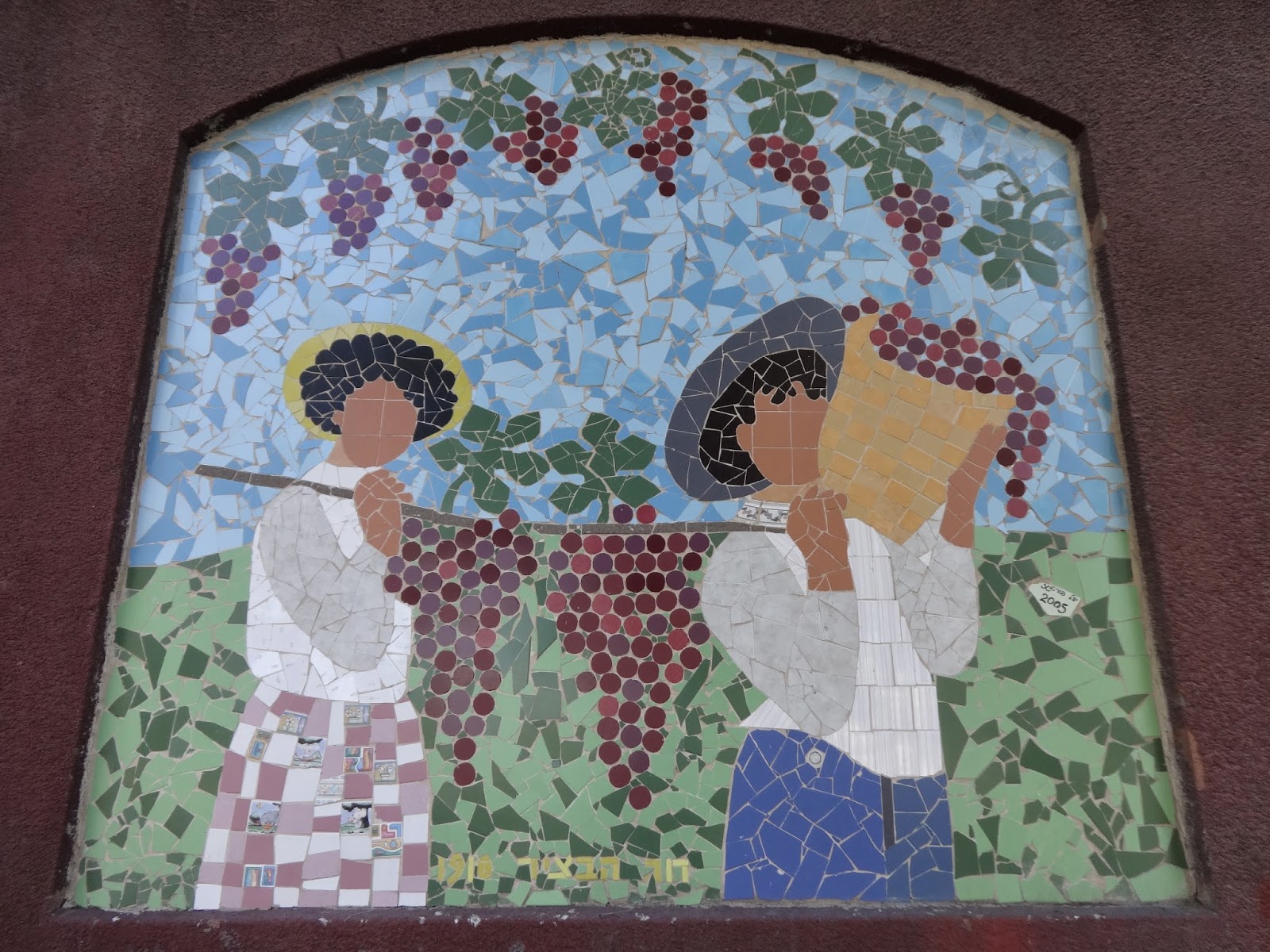 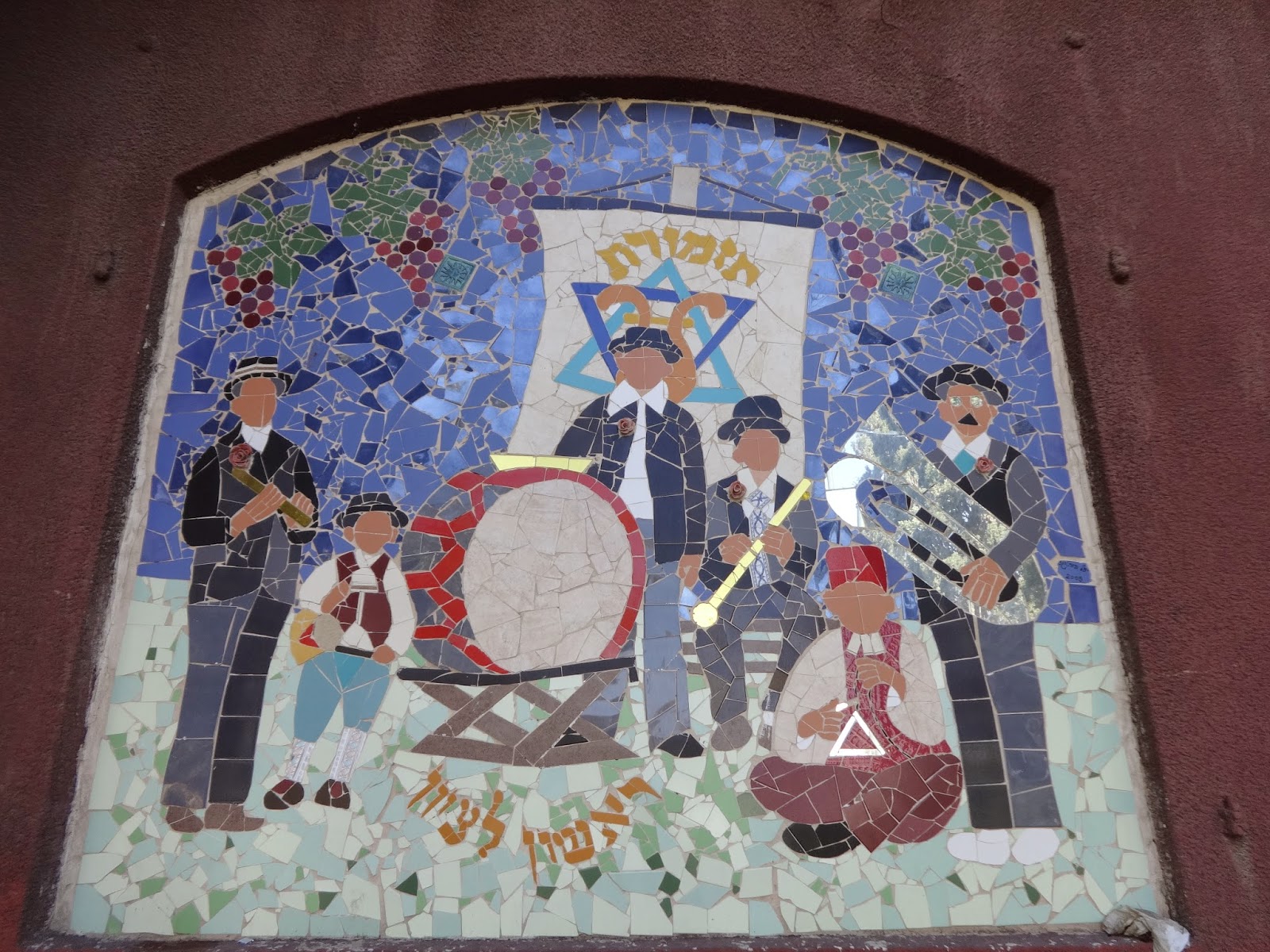 The works are based on historic photographs from the Museum of Rishon LeZion and employ modern mosaic techniques achieved through the use of materials such as ceramics and broken glass. 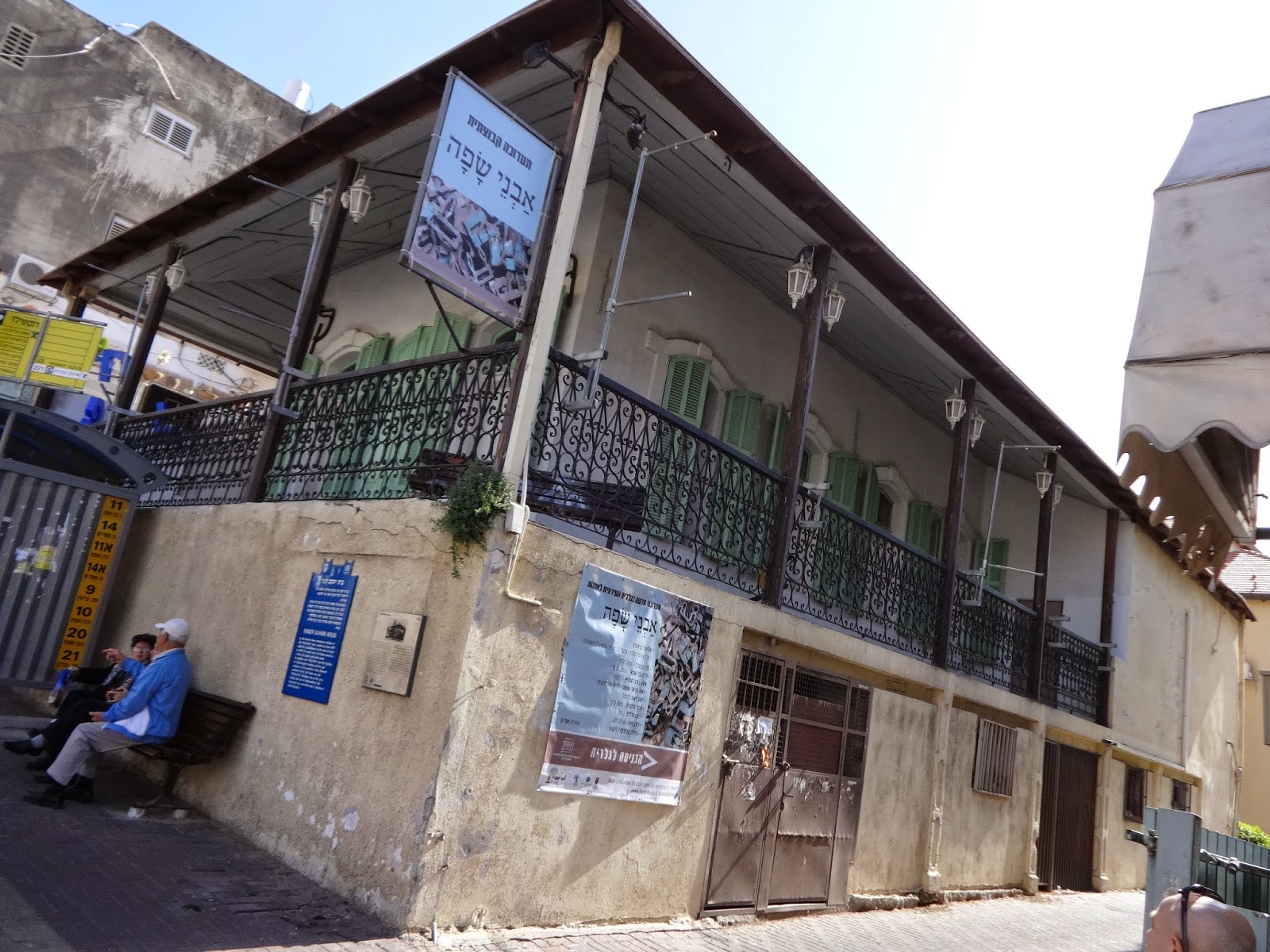 This dilapidated structure was once the Kanner House.  Yaakov Kanner, a farmer, blacksmith, and chairman of the Village Committee, built this colonial style house in 1900.  The house later served as Rishon LeZion's First-Aid Clinic and the yard was used by the Fire Brigade (1940-1985).  Prior to the establishment of the State of Israel, the Haganah paramilitary defense forces used the house as one of its headquarters and arms cache (1929-1948).  During the War of Independence, the basement was converted into an emergency hospital. 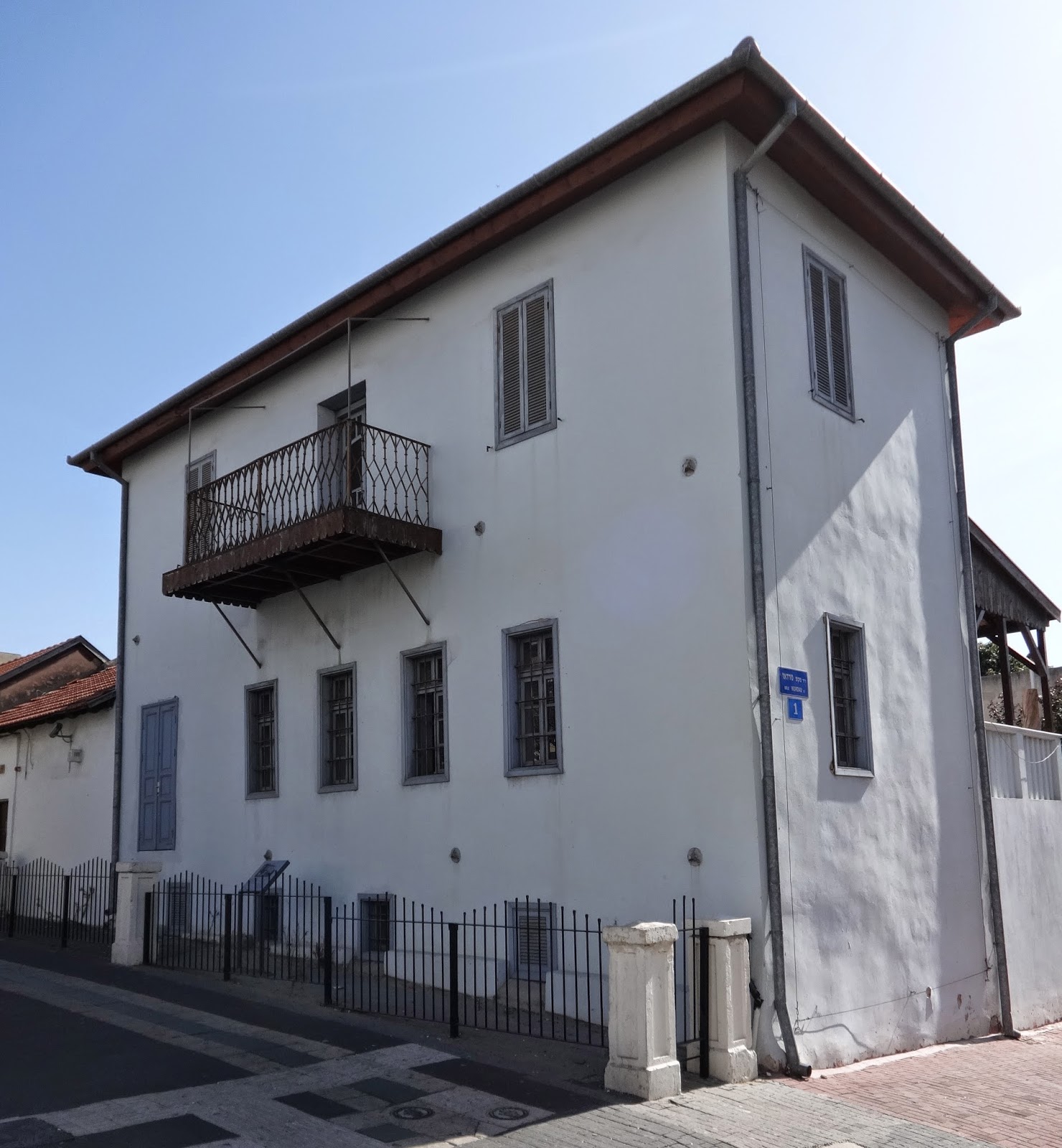 Pictured here is the Heisman House, home of founders Shraga Feivel and Feige Heisman, built in 1882.  It was one of the first houses in the village.  The two-story home is built from sandstone, which was typical of the Eastern European style of buildings that were familiar to Heisman d the other early founders.

Naftali Hertz Imber, author of the poem "Hatikva" that would become the national anthem, briefly lived in the basement in 1883.

Today, the house serves as a venue for historical and artistic exhibitions.

Displaying a stark contrast to everything else we had seen that day was City Hall Square, with its modern architecture and family-friendly park spaces and playgrounds. 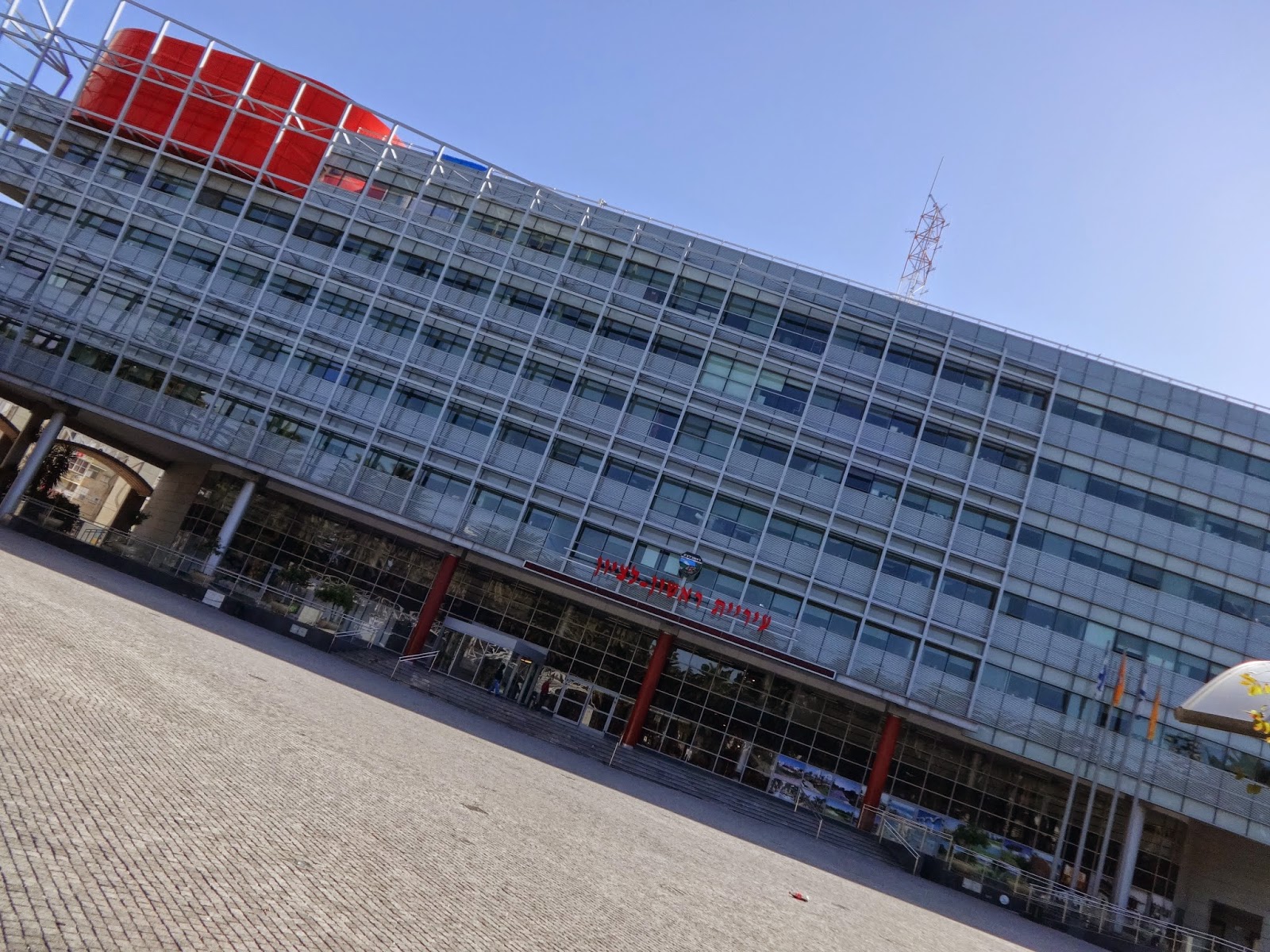 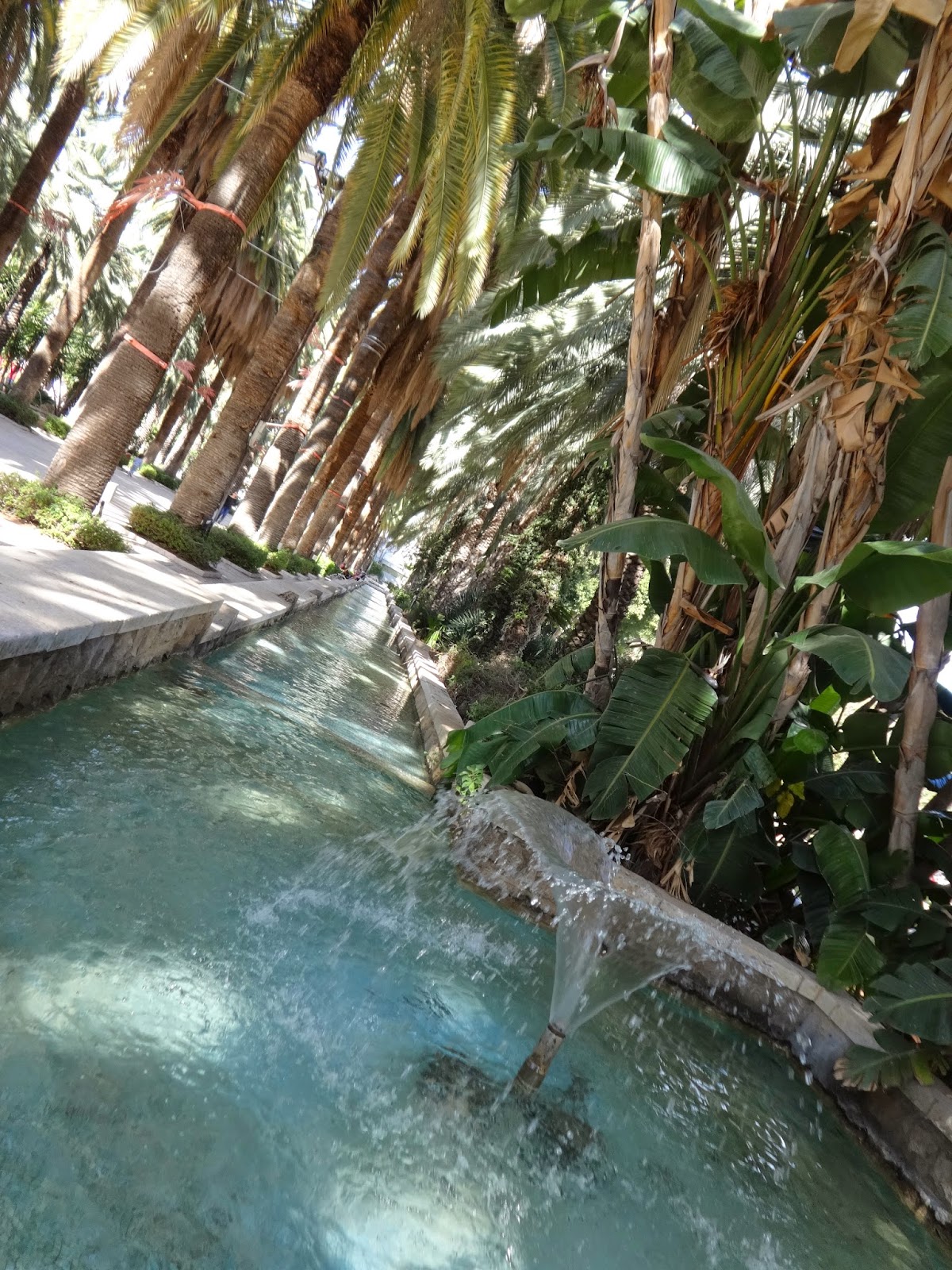 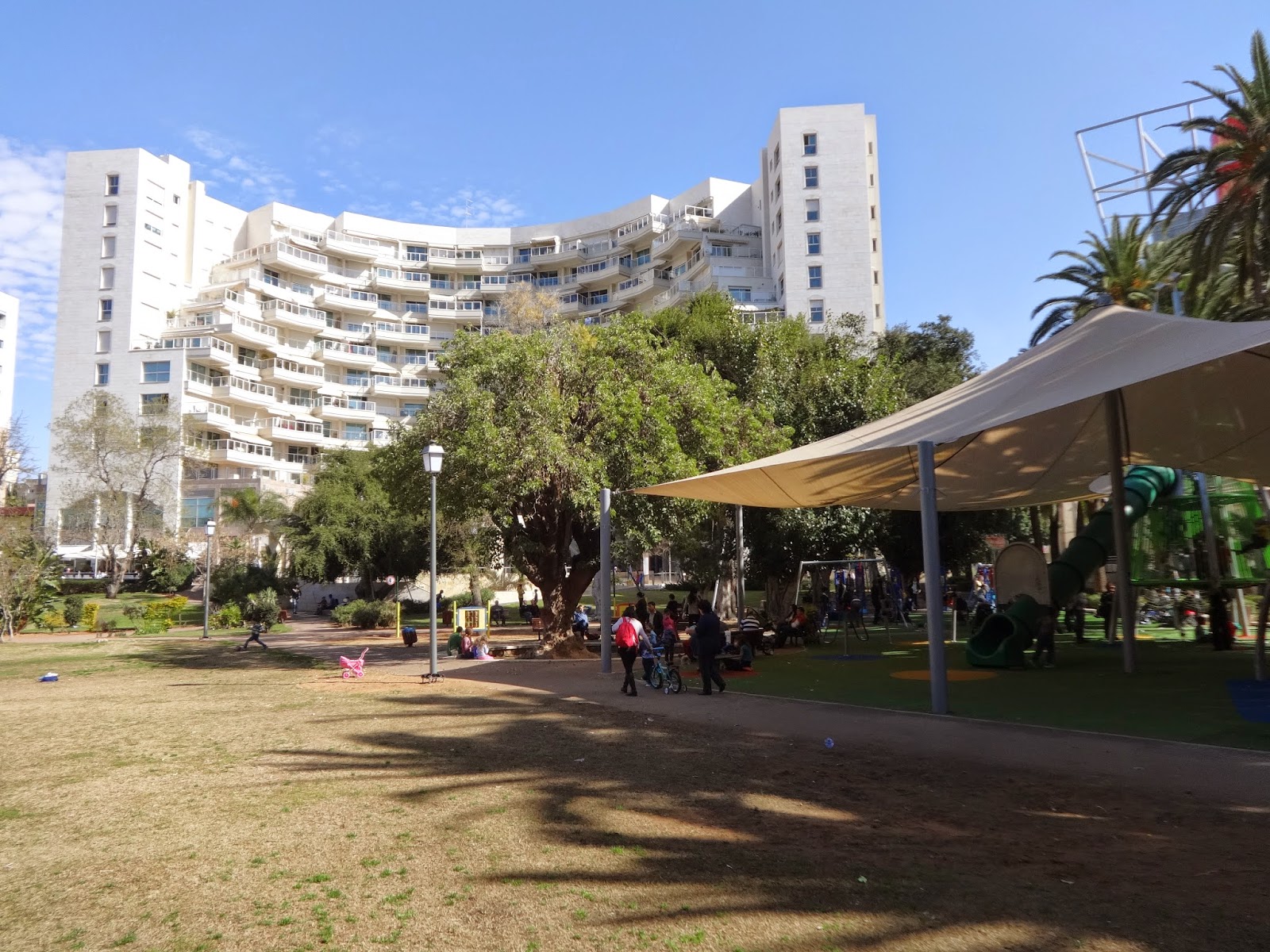 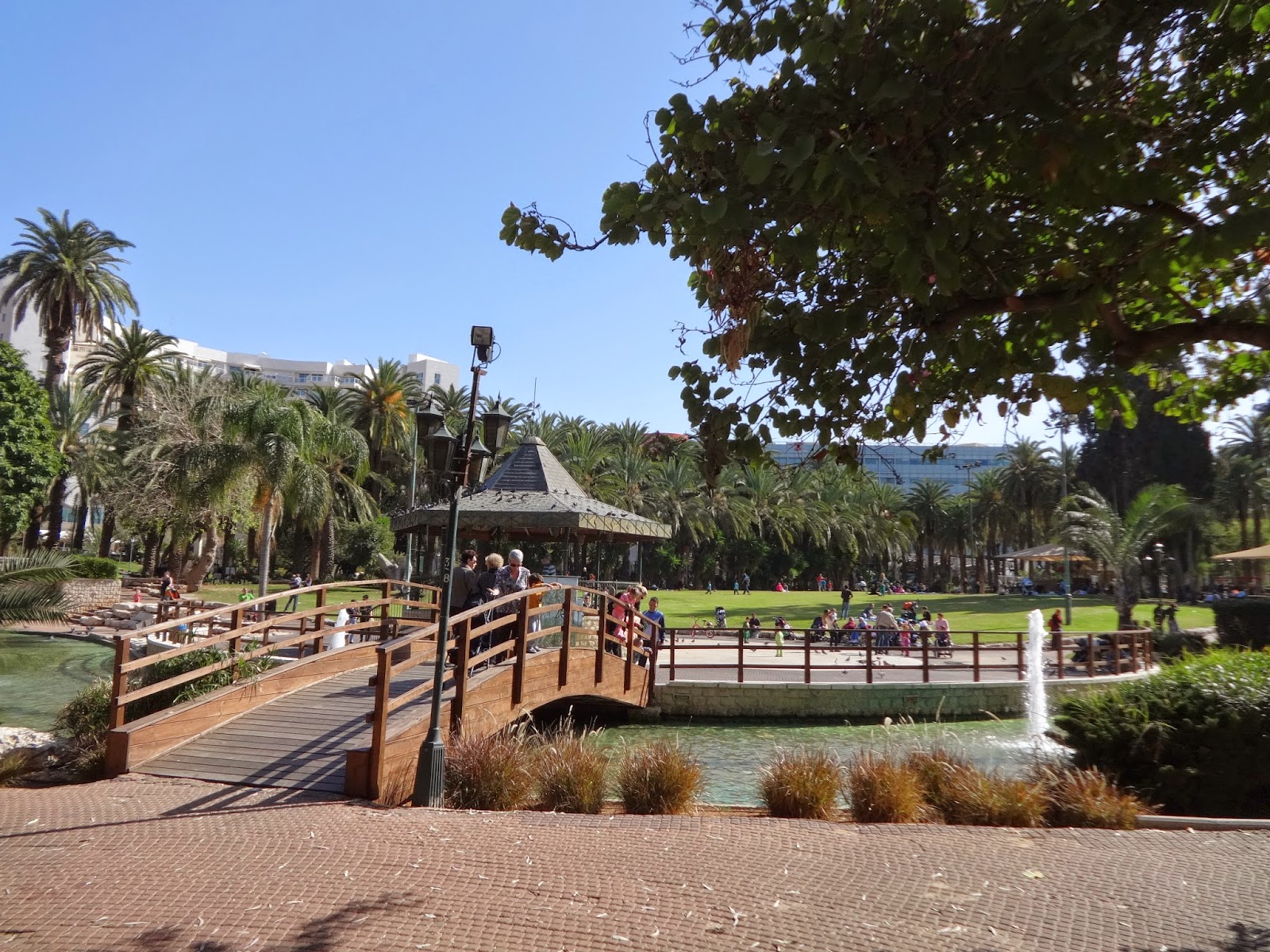 Israel does a wonderful job demonstrating the interesting dichotomy of old and new, and Rishon LeZion appears to have that in spades.  Sadly, the Sabbath isn't the best time to do a lot of exploring in Israeli towns, so we cut our walking tour short and headed on to our next destination.

Sorek Stream, is one of the largest, most important drainage basins in the Judean Hills.  The stream served as an important waterway between Jaffa and Jerusalem during the 19th century.  Today, families spend warm spring and summer days BBQing and camping along the bank, riding dune buggies through desert environment, and swimming in questionably clean/dirty waters.   Aviv took us on a short desert hike to discover Reuben's Tomb. It was a small, ramshackle building in the middle of nowhere.  We had a hearty laugh at the sight of it, made more robust by witnessing a drunk camper hobble inside to pee on the wall.  Aviv commented on how ridiculous it was that the tomb was even here, as there was no religious significance to the site. 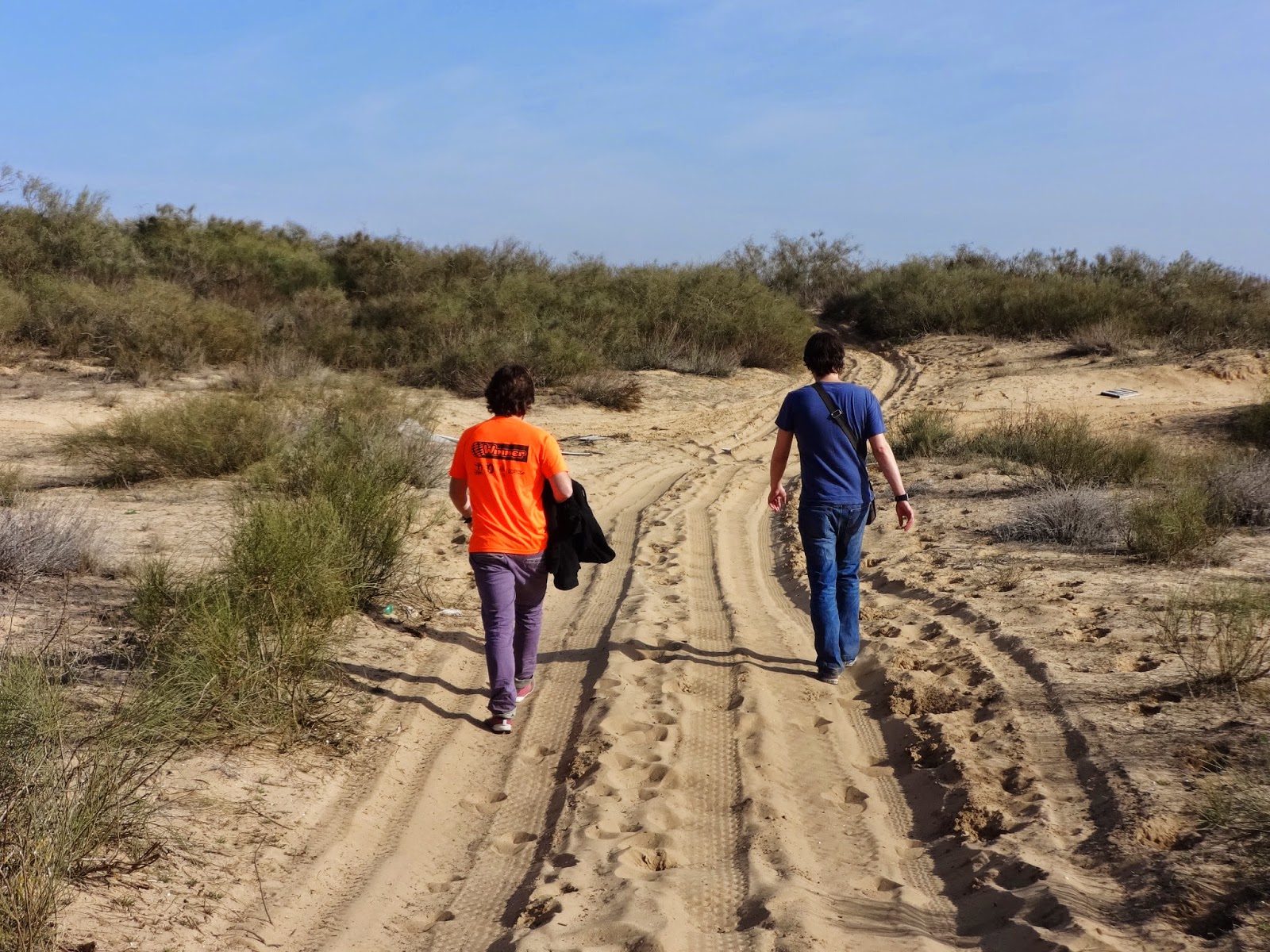 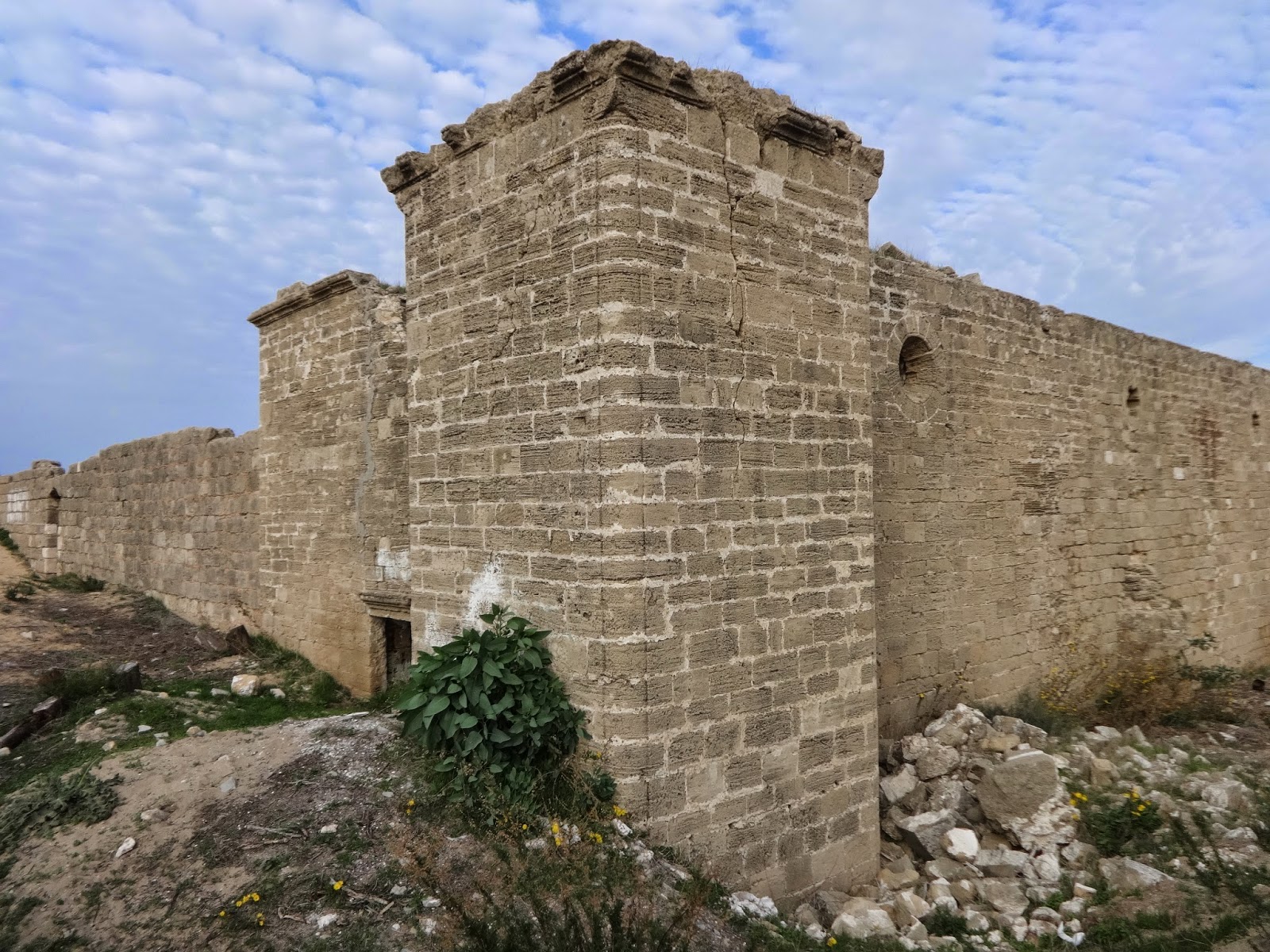 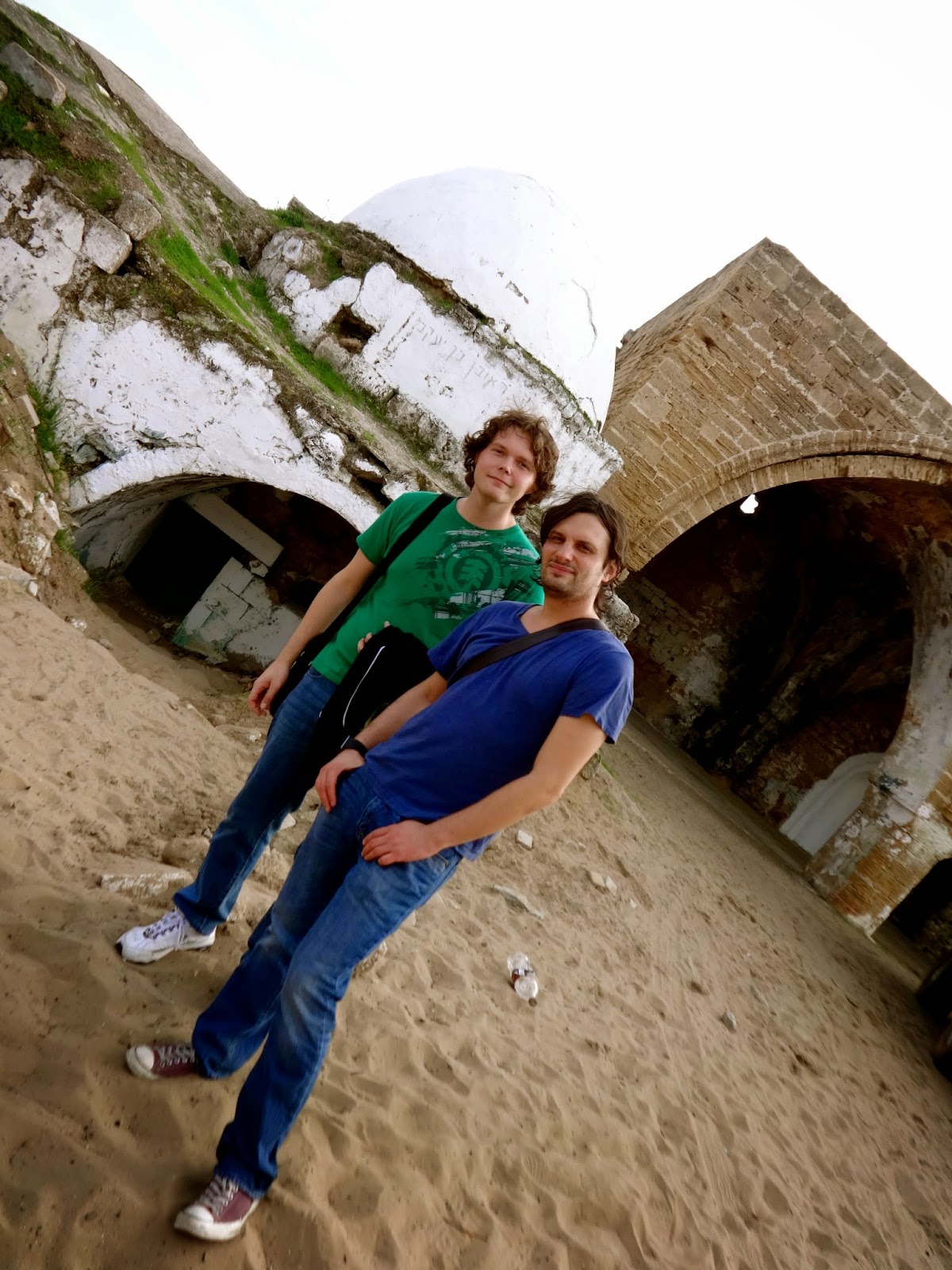 As it turns out, that wasn't exactly true.  I wasn't to discover until later that Reuben's Tomb was basically the last remaining structure of a Palestinian village known as Al-Nabi Rubin.  Nabi Rubin was a Palestinian village situated on the southern banks of Sorek Stream, or Wadi al-Sara as it is known in Arabic.  The village was named after the shrine believed to by Muslims to be the tomb of Reuben.  A 1945 land survey showed an estimated population of 1,420 inhabitants.  The village was captured by the Israel Defense Forces on June 1, 1948 during the Arab-Israeli War.  All villagers were expelled.

The shrine of Reuben remained abandoned and deteriorated over time.  The mosque's minaret was torn
down in 1991.  The shine was eventually reconsecrated as a Jewish holy site, despite Judaism's traditional placement of Reuben's tomb in the Lower Galilee.  So Aviv was partially correct.  There wasn't much significance in the site for some people.  But that's not true for all people.

Completely ignorant of all of this, we moved on to our final stop of the day. 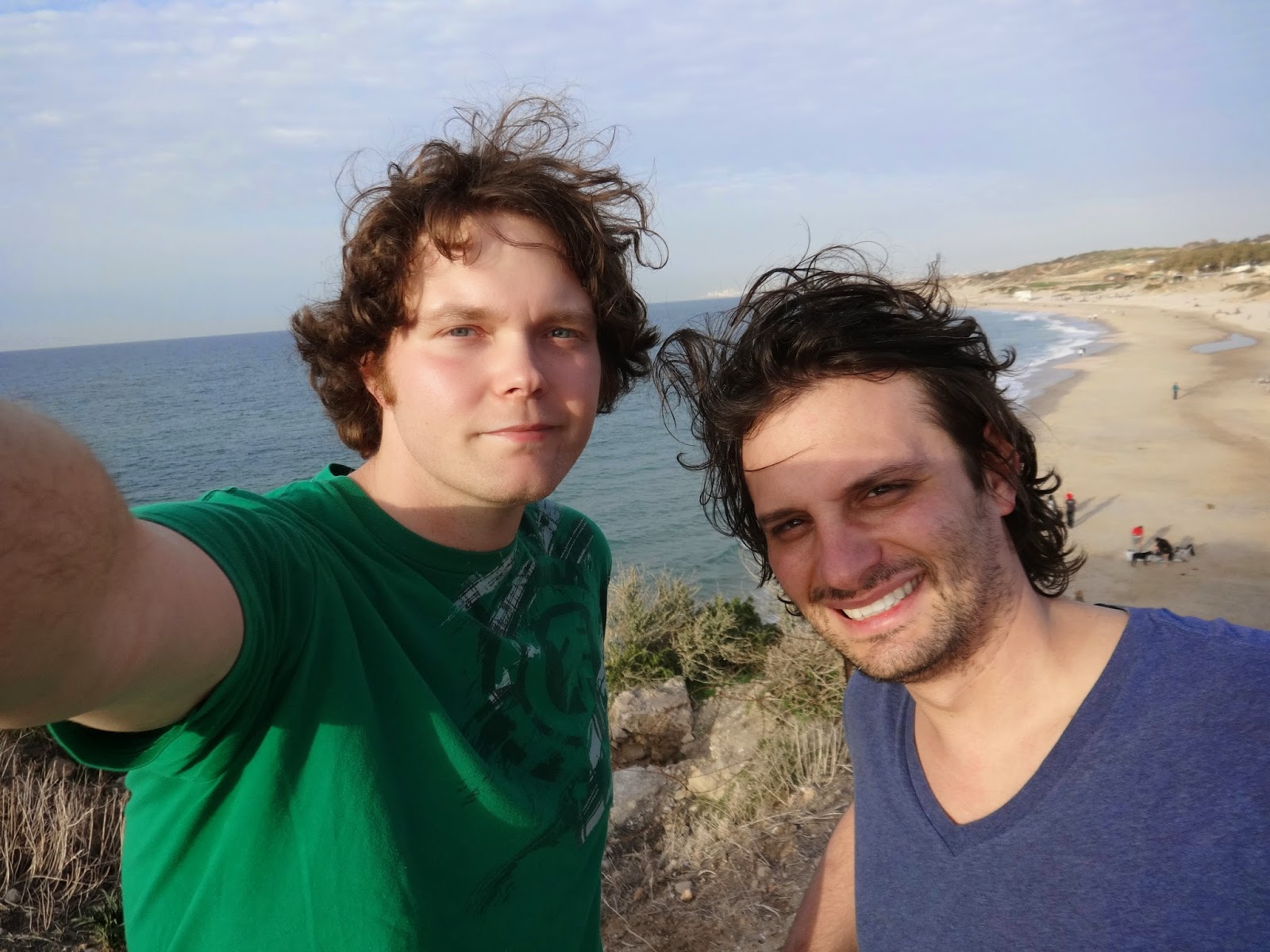 Palmachim Beach National Park is one of the newest additions to Israel's Nature and Park Authority.     This pet and family friendly beach seems like an excellent spot for a holiday weekend cookout with friends.  The beach is home to Yavneh-Yam, an ancient port city first settled in the Middle Canaanite period.  It has fallen under Egyptian, Israelite, Persian, Roman, and Islamic control throughout the ages.      The only remaining evidence are partially excavated remnants of the Muslim fortress and a Roman-style bathhouse built during the Early Islamic period. 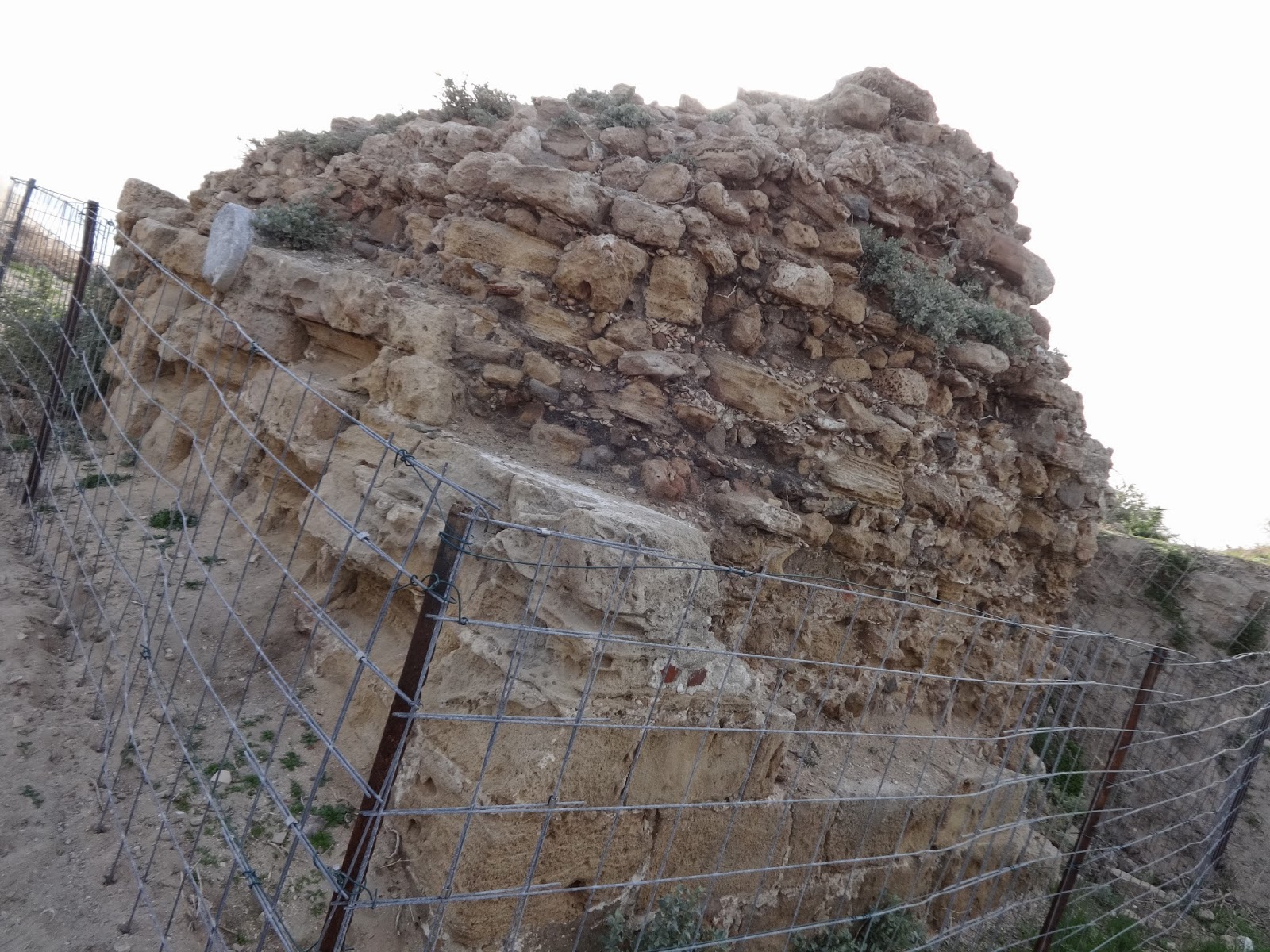 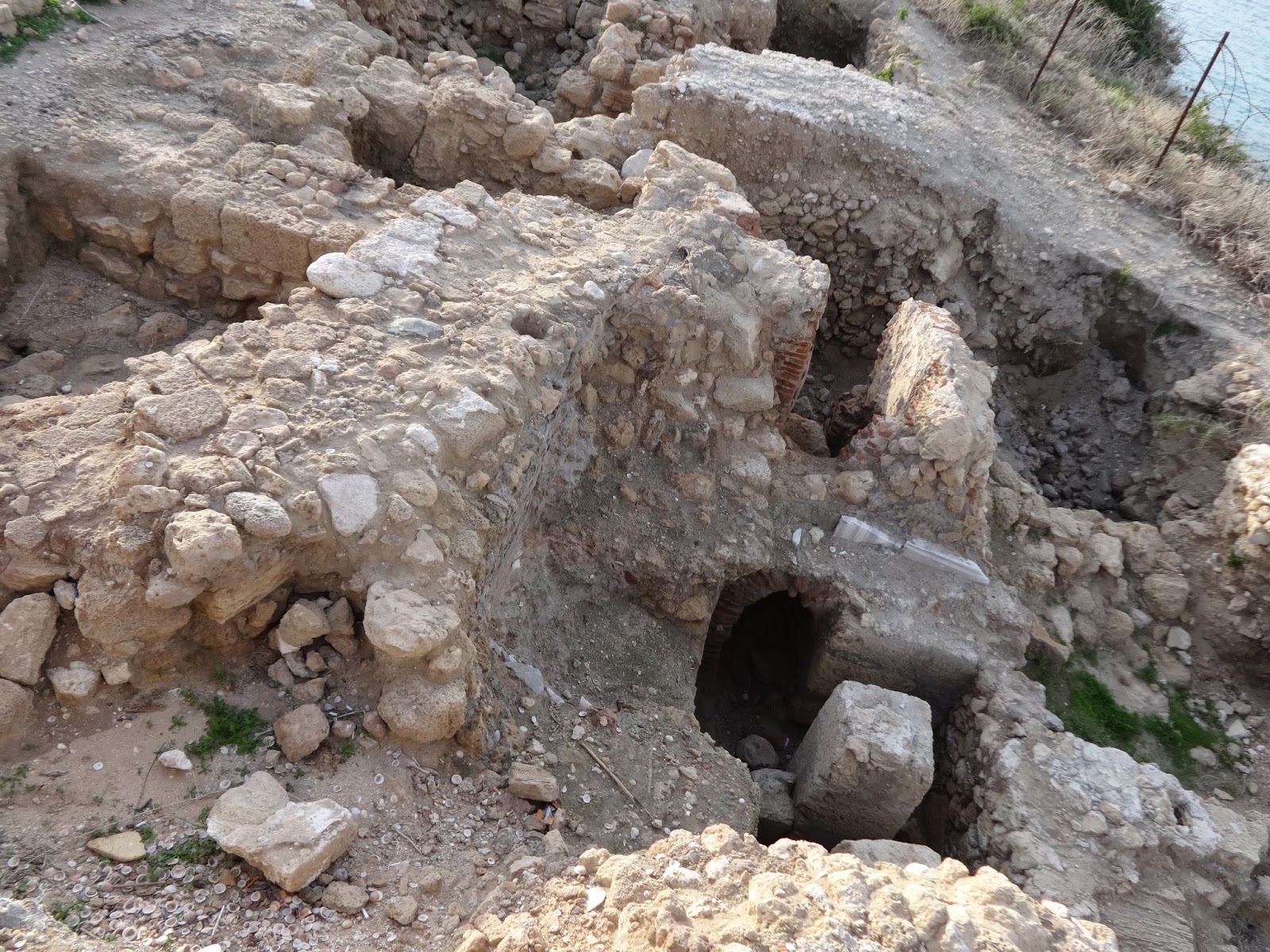 Excavations continue.  But while they do, this beach offers stunning enough scenery to draw visitors back again and again.  Not that we've returned yet.  But hey, it's summer now.  You never know what will happen. 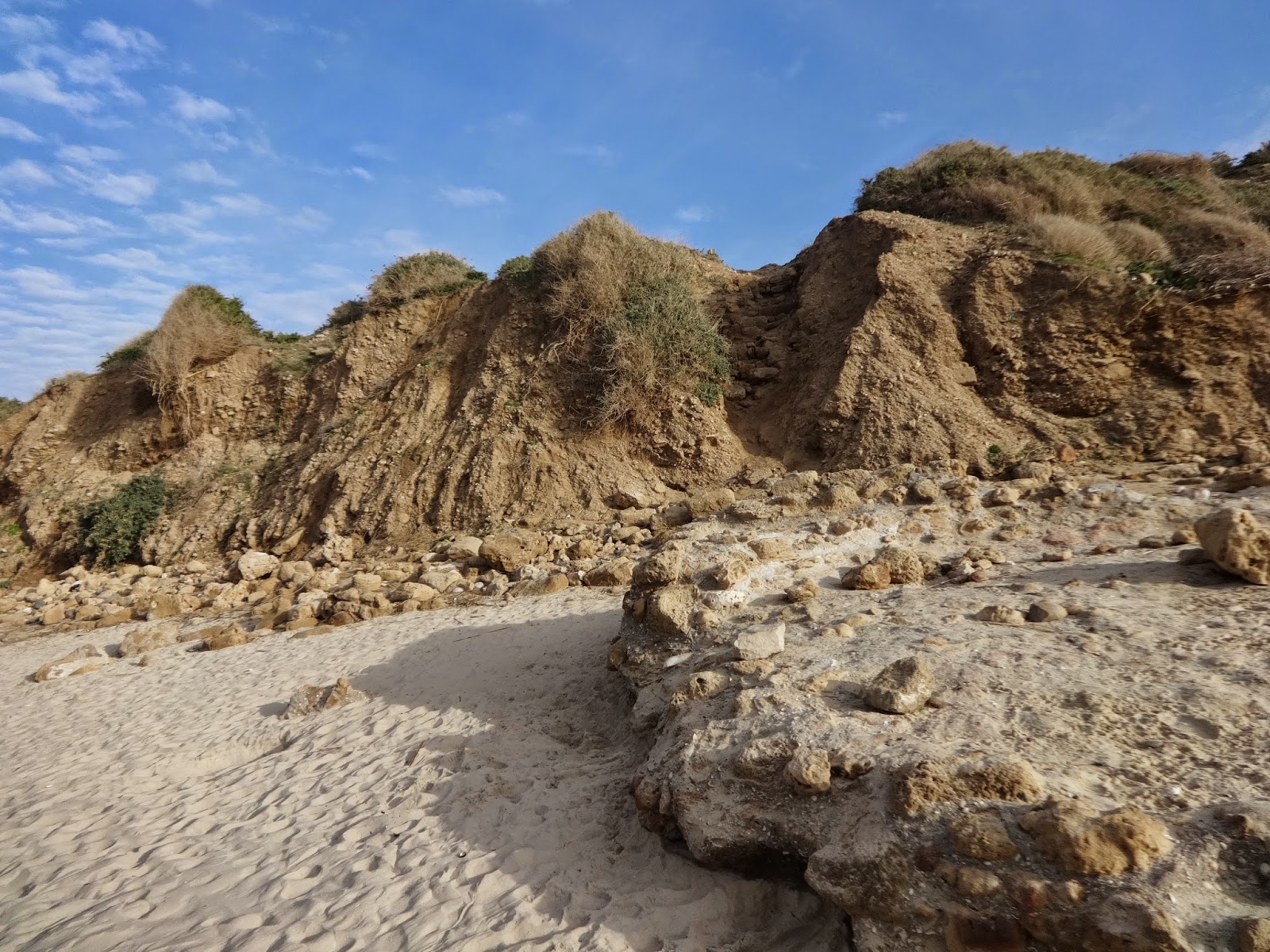 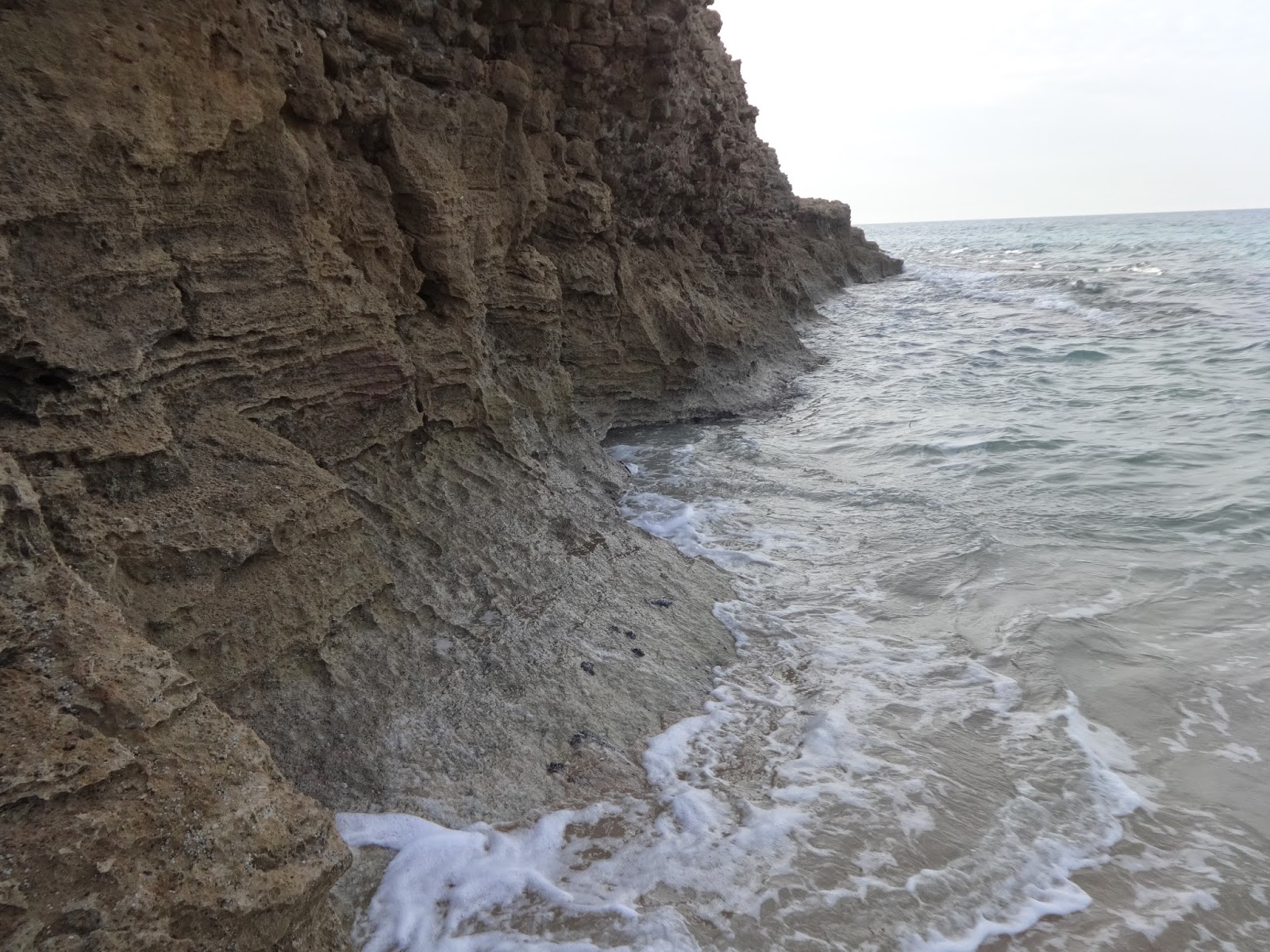