The Bahá'í Gardens of Haifa and Akko

The Bahá'í Gardens are harder to access than a popular new ride at Walt Disney World during peak summertime hours.

We first attempted to access the gardens back in November when our friend Sohail was visiting from Washington, D.C., only to learn that the site closes at 12:00pm.  We had arrived at 12:30pm.  Sigh.  We did manage to get a few photos in the lower gardens, which were still open. for public viewing.  We then ate a delicious dinner and called it a night…which consisted of taking a super slow train all the way back to Jerusalem.  This was at a time when we were still new in Jerusalem and our car hadn't yet arrived from the states. Special effort to get to Haifa, all for naught.  SIGH.

Our next attempt was in February, when another friend, Susan, was visiting from Poland.  We arrived early in the day, only to be thwarted by inclement weather:  There are steep stairs and hills within the garden, and it closes during rainy weather as a safety precaution.  SIGH.  Never deterred and by then in possession of our car, we quickly adjusted course and had a day of fun in Akko.

Third time's the charm, folks.  Finally…finally….on March 8th, we managed to breach (with permission, of course) the garden's security perimeter and behold the beauty within when we decided to risk strike three during a day trip with yet another friend, SongHua, a science guy from UC Berkley currently living and doing science things in Israel.  It was another cloudy day and fingers were crossed the entire drive…but we made it! 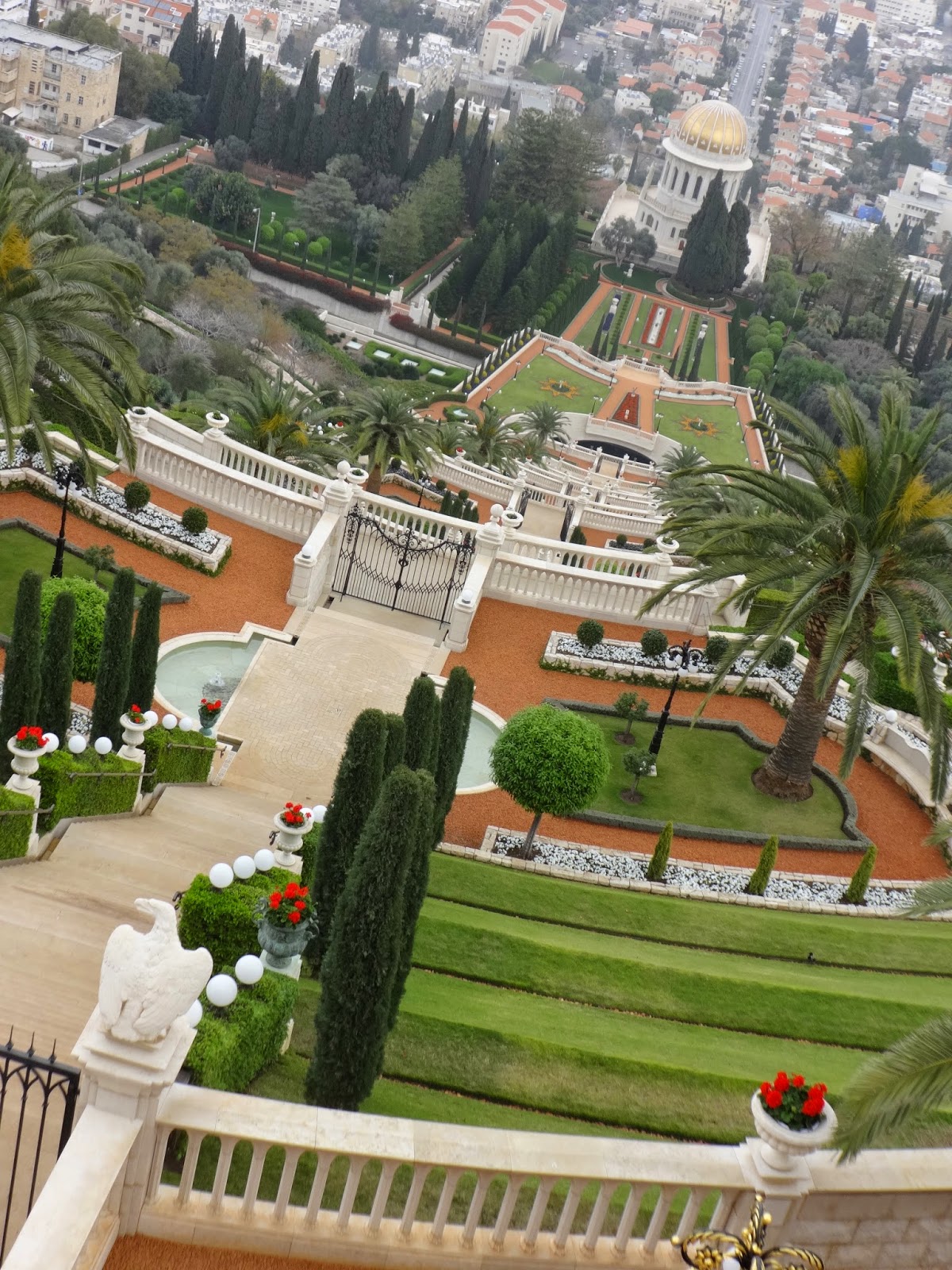 The Terraces of the Bahá'í Faith, aka the Hanging Gardens of Haifa, comprise a staircase of nineteen terraces extending all the easy up the northern slope of Haifa's Mount Carmel, a distance of approximately one kilometer.  The golden-domed Shrine of the Báb, the resting place of the Prophet-Herald of the Bahá'í Faith, stands on the central terrace looking across the bay towards Akko.  The remaining terraces represent the first eighteen disciples of the Báb.  Architect Fariborz Sahba began designing the gardens in 1987 and oversaw their construction.  Although the terraces first opened to the public in June 2001, the Báb's mortal remains have been interred within the Shrine since March 21, 1909.  Martyred in Iran in 1850, the Báb had devoted Himself to preparing the way for Bahá’u’lláh, Founder of the Bahá'í Faith, and for His Message of the unification of humankind.

The outer structure of the Shrine, as well as the eighteen garden terraces, were created entirely through contributions from Bahá'ís around the world. 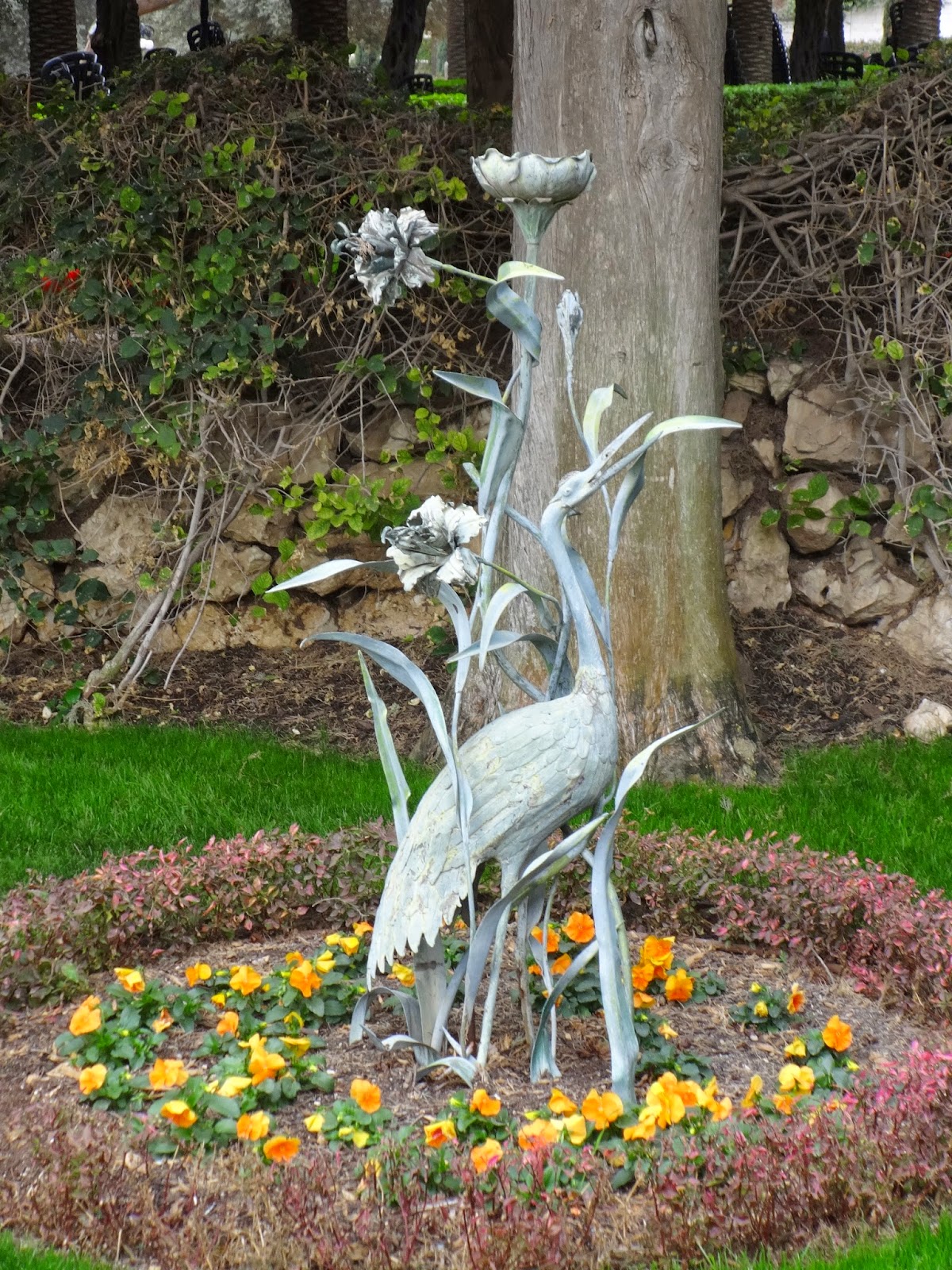 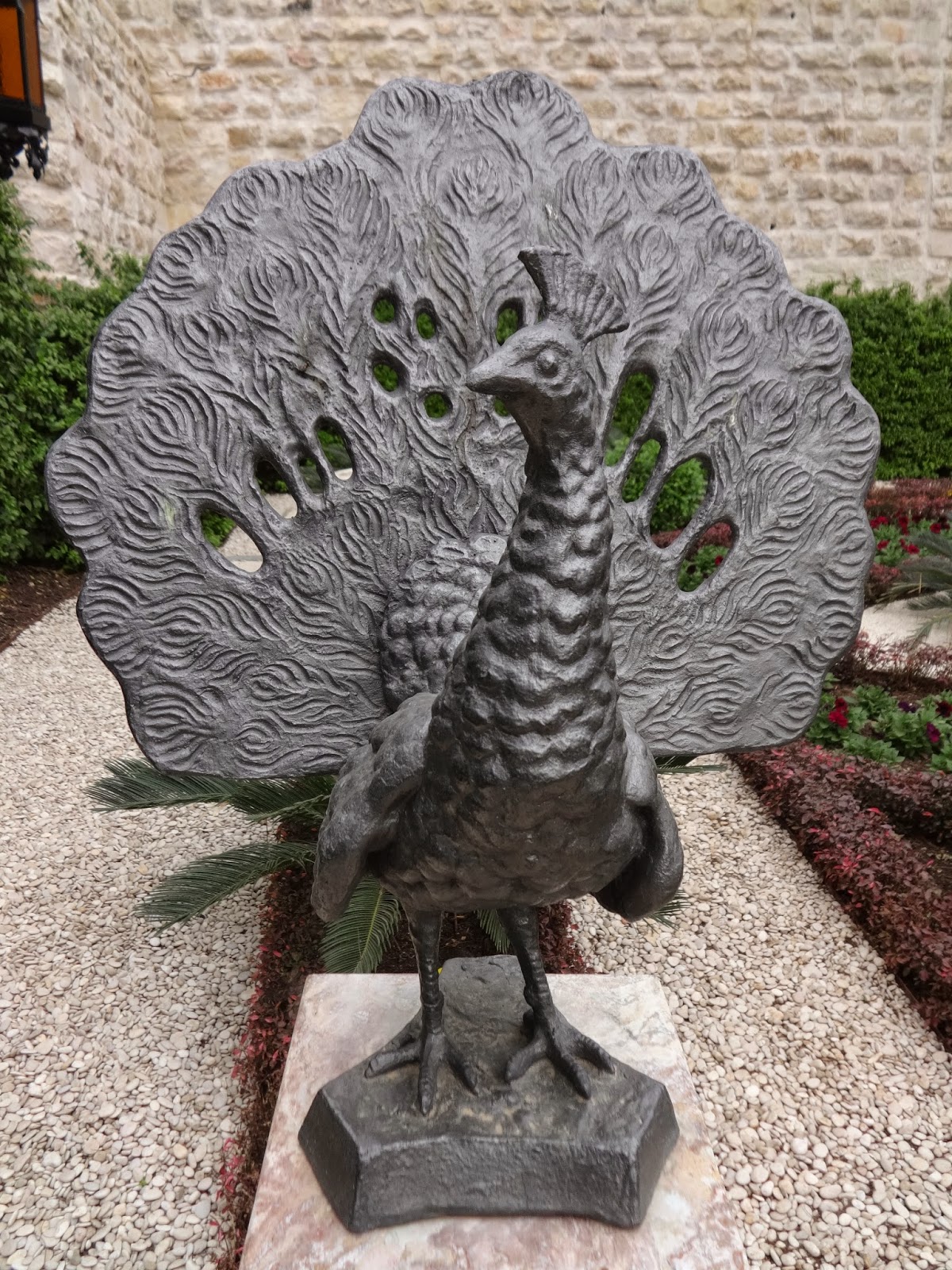 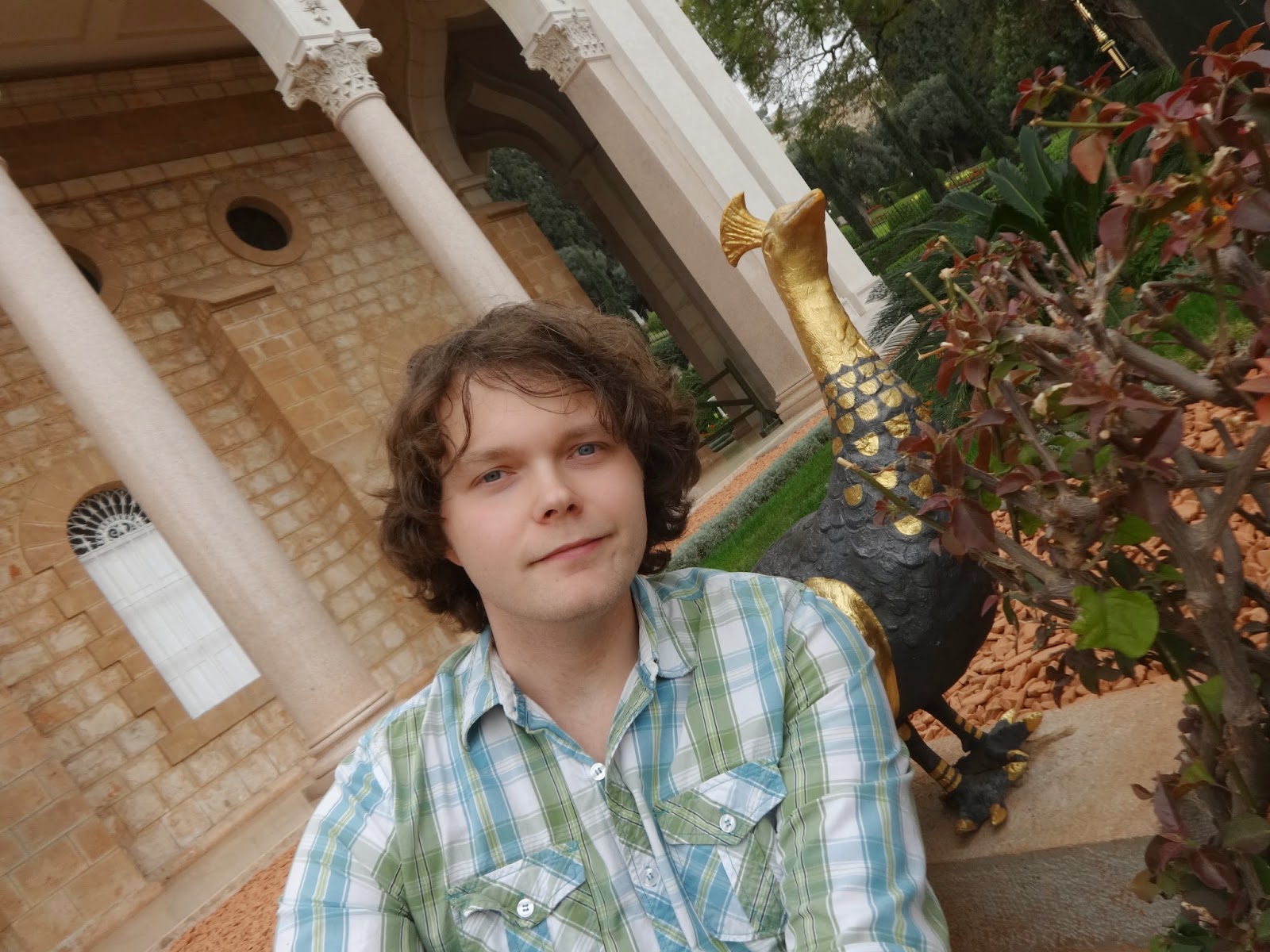 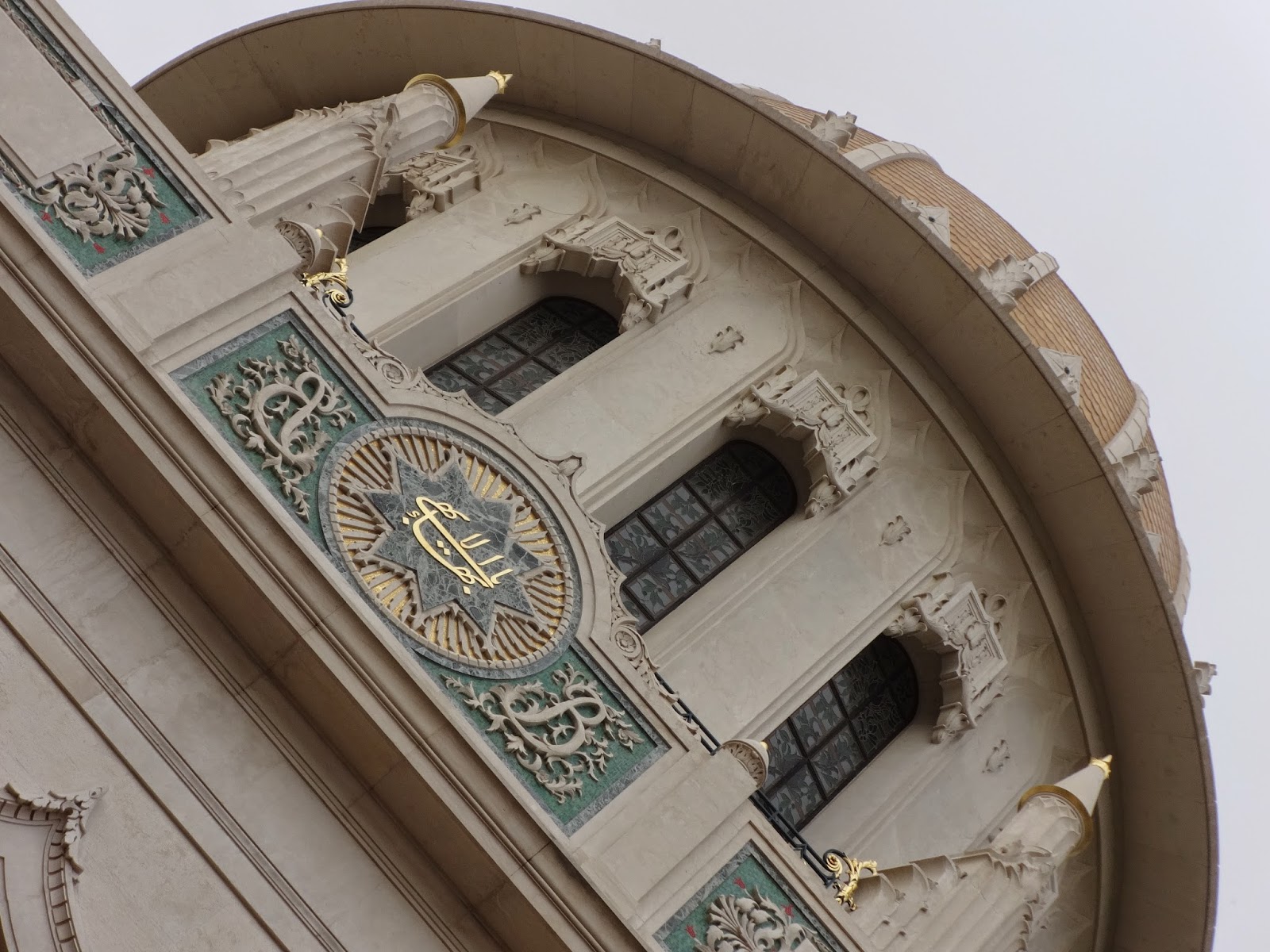 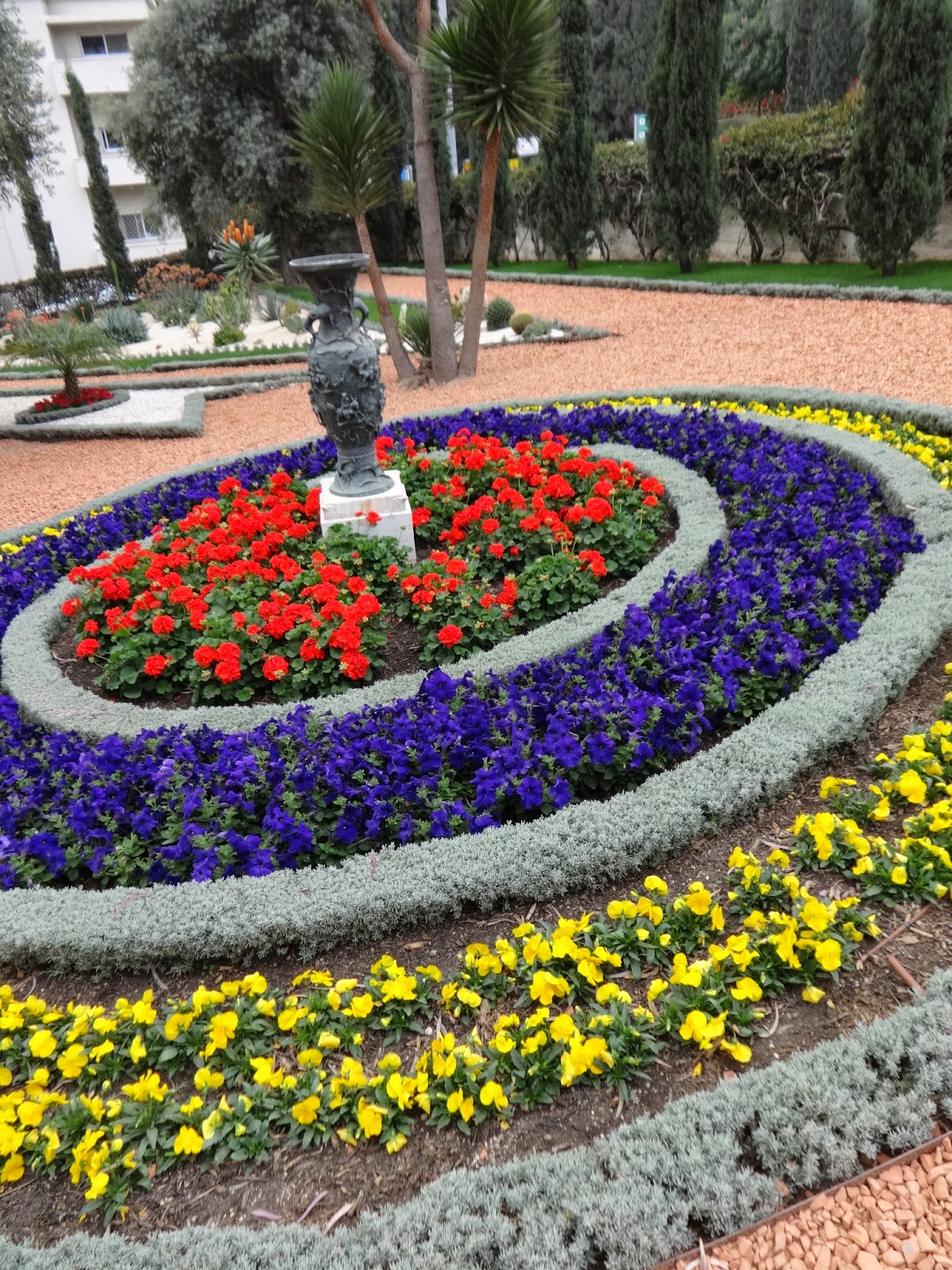 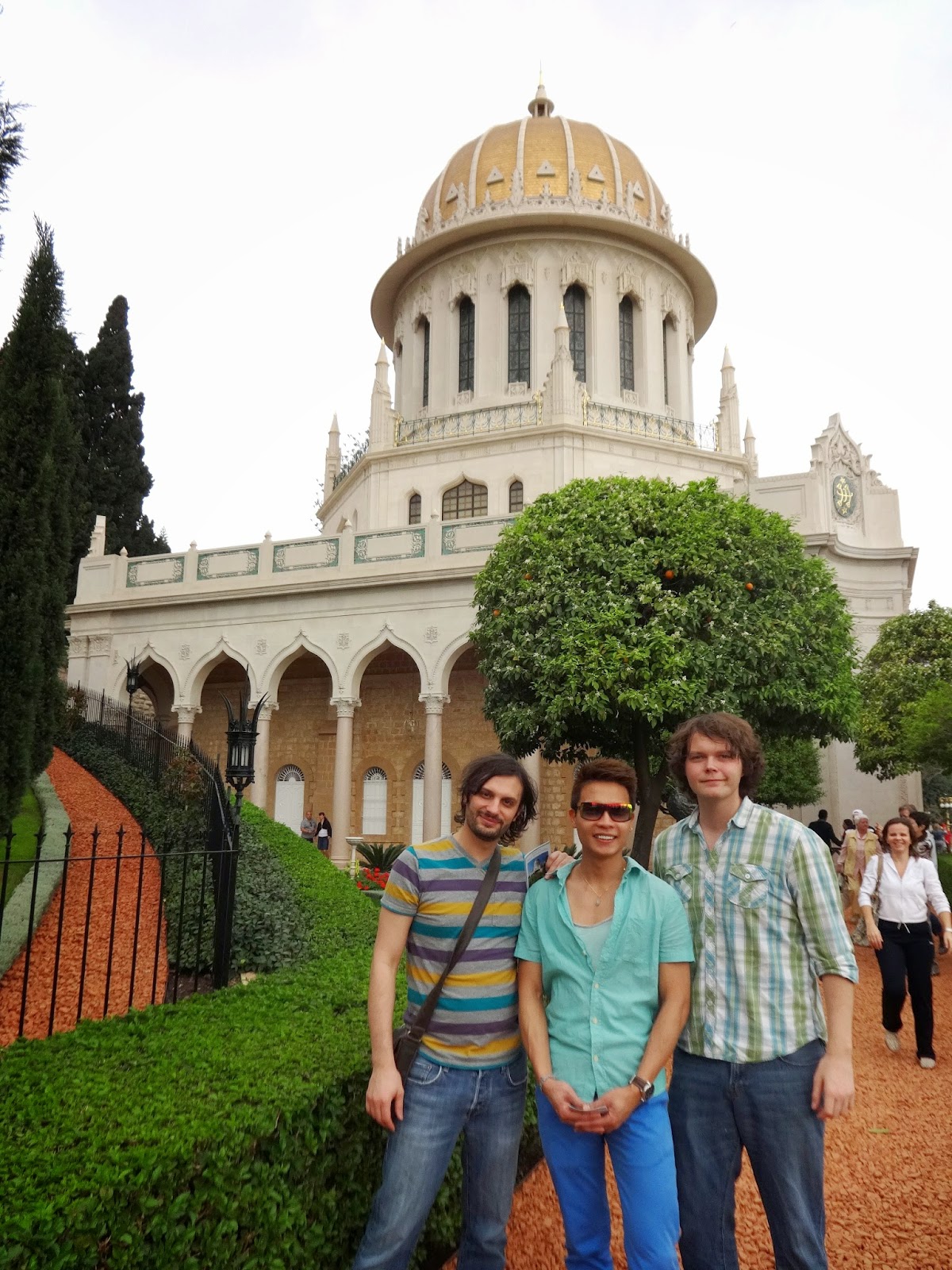 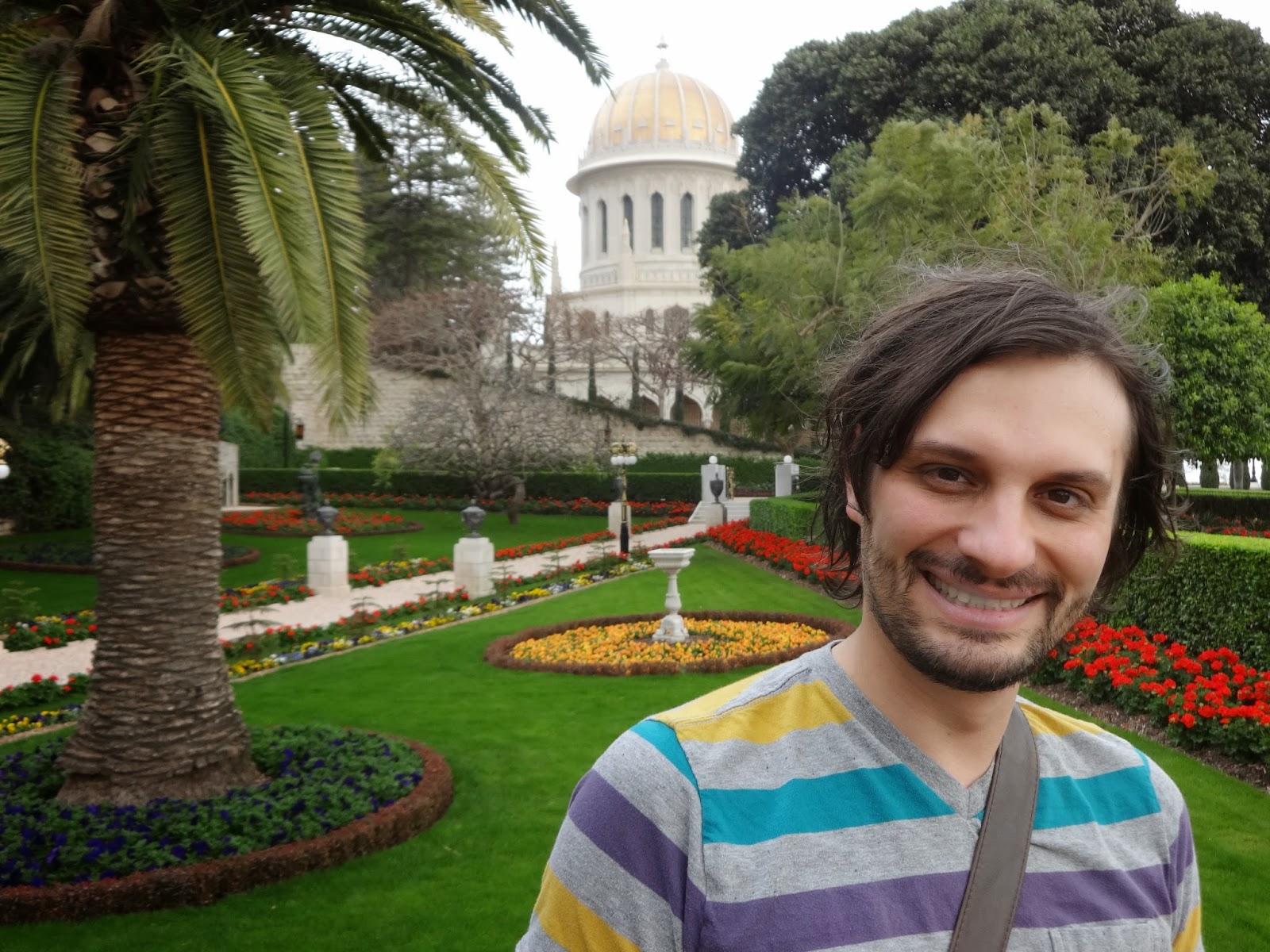 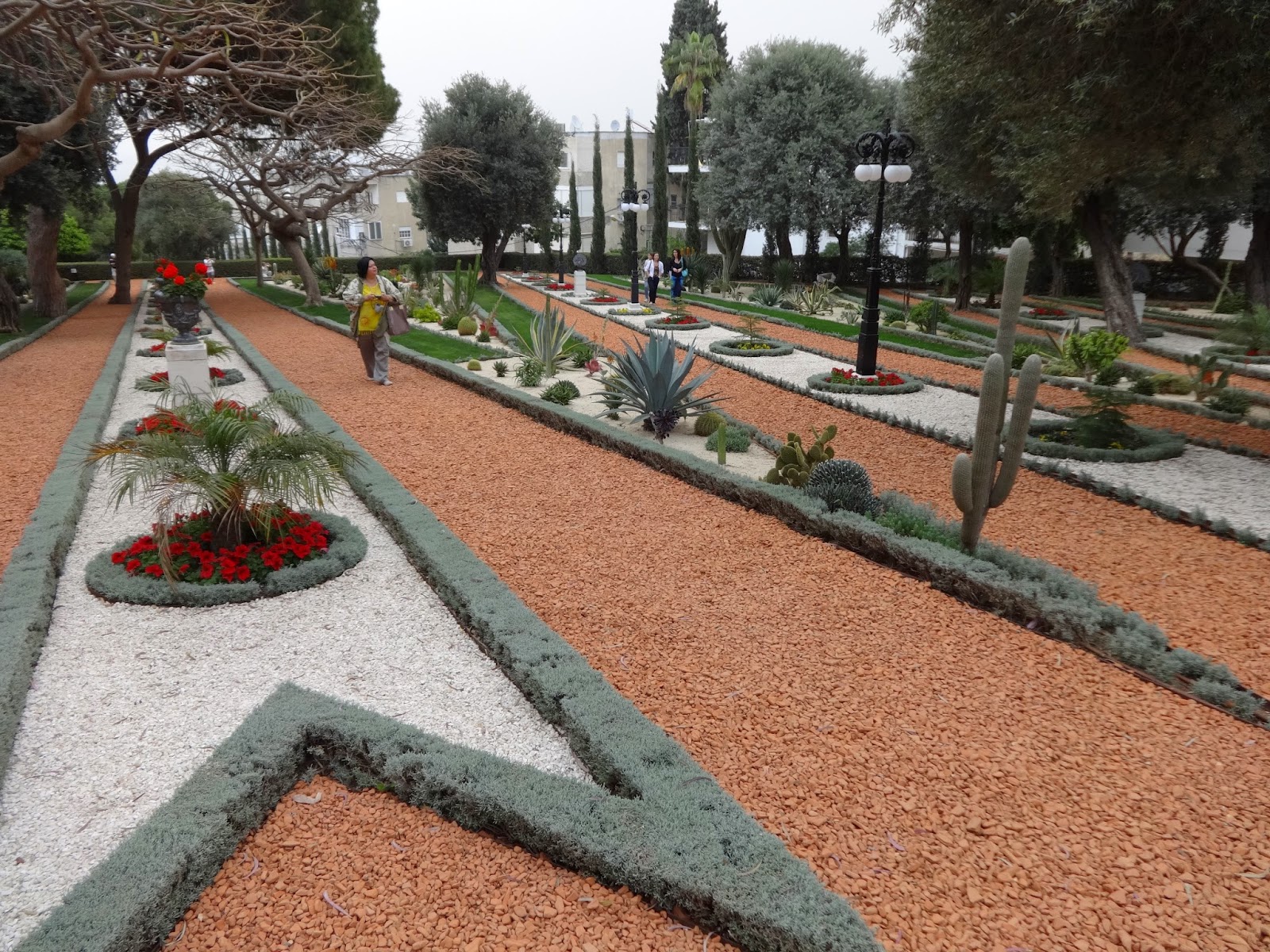 Photography is not allowed within the Shrine itself, but imagine walking through a door, passed a curtain, and into a room sparsely filled with vases and carpets.  Inside the room is an altar carefully strewn with rose petals, more vases, and other types of poetry.  A chocolate and marigold tapestry with a floral print adorns one wall.  And that's it.  For all of the elaborate care and detail that we had just seen outside, I was shocked to find such modesty within the Shrine's interior.  But I guess being humble is supposed to be part of religion, right?

Having finally been successful in viewing the Haifa gardens, we decided to go 2-0 and take care of those in Akko as well, so long as the weather held out.  It did.

The Bahá'í Gardens at Bahjí in Akko form a wide circle surrounding the historic mansion where Bahá’u’lláh, the Prophet-Founder of the Bahá'í  Faith, resided during the final years of His life, as well as the shrine where His remains were laid to rest upon his death in 1892. 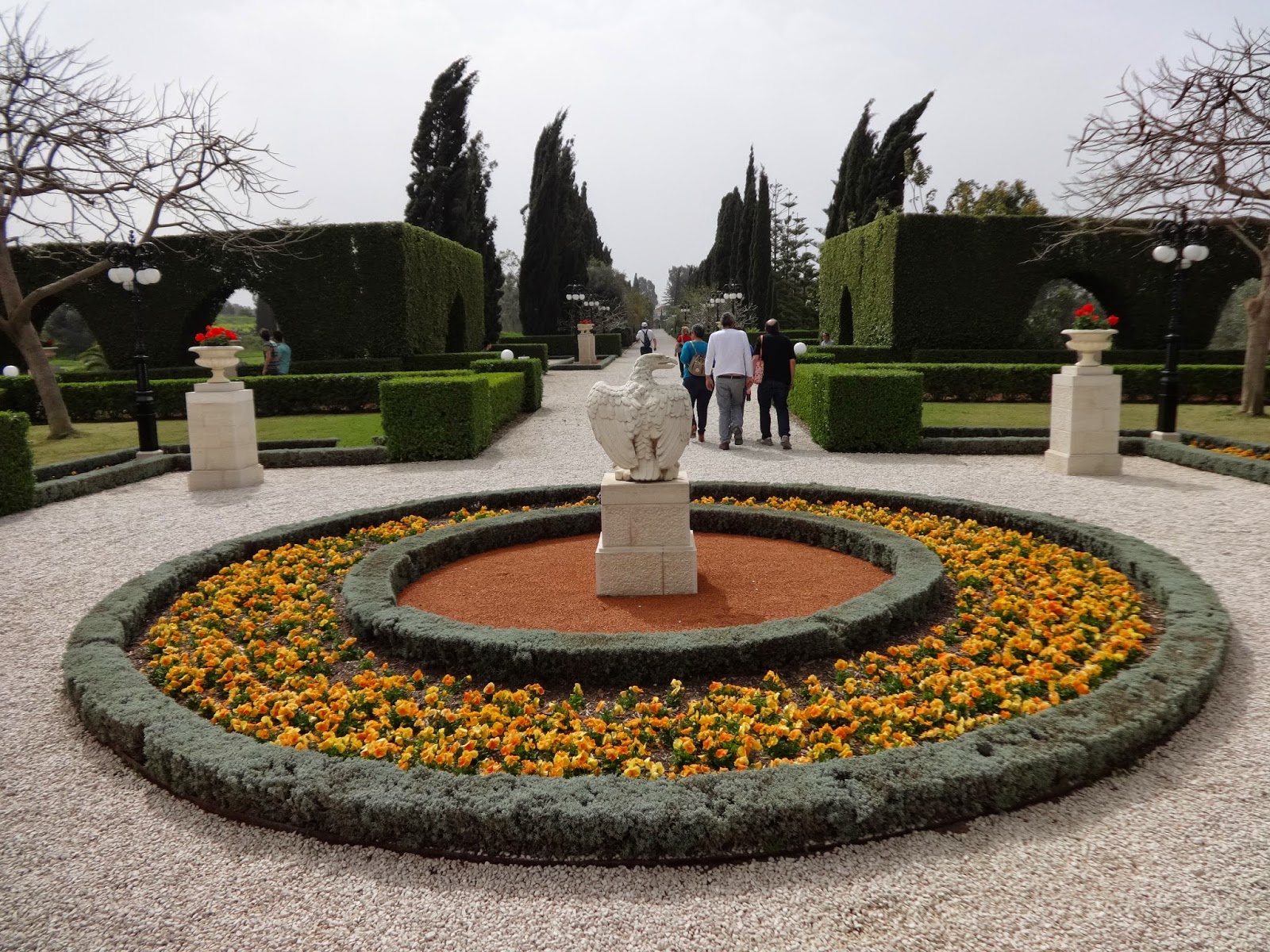 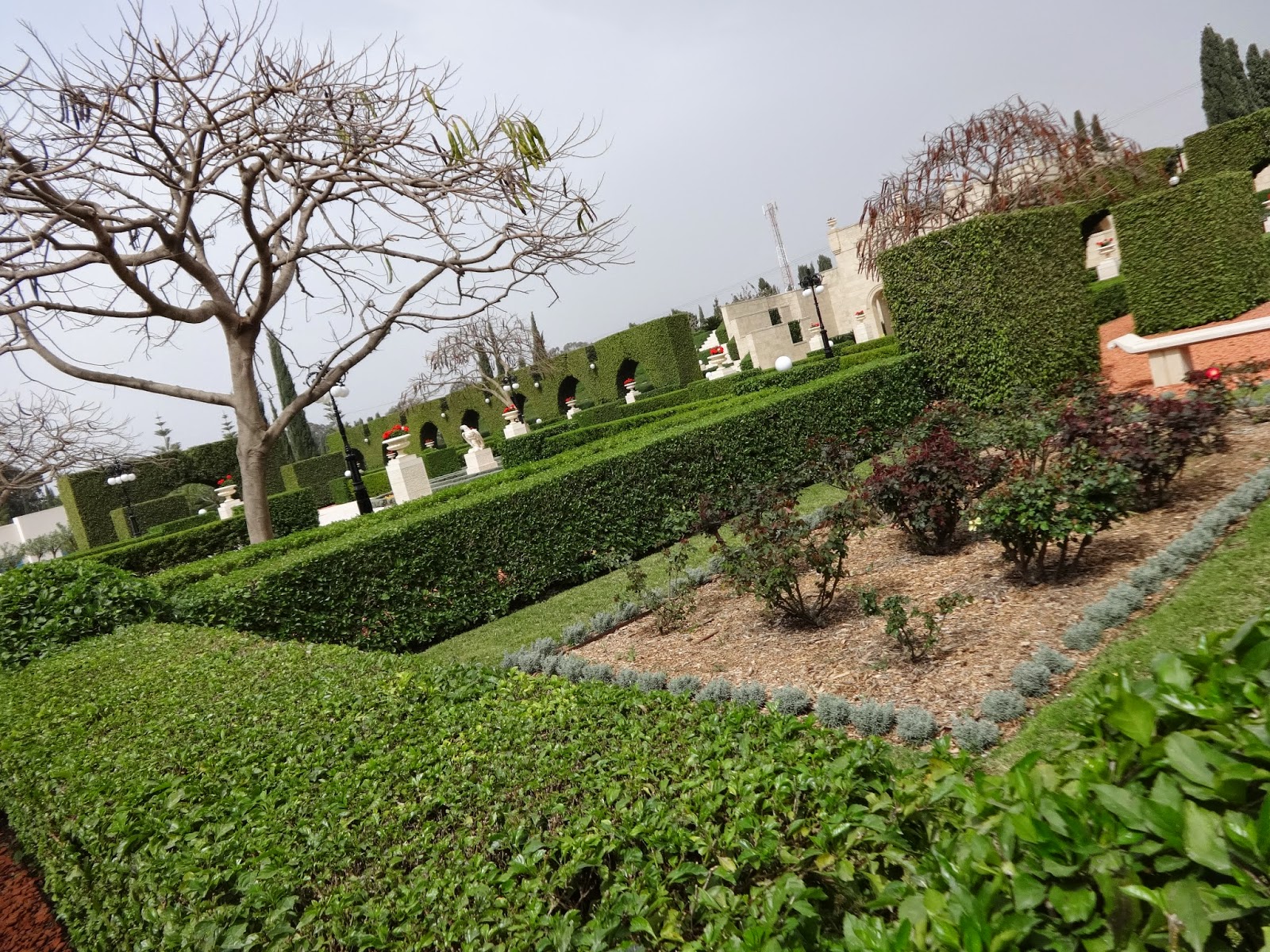 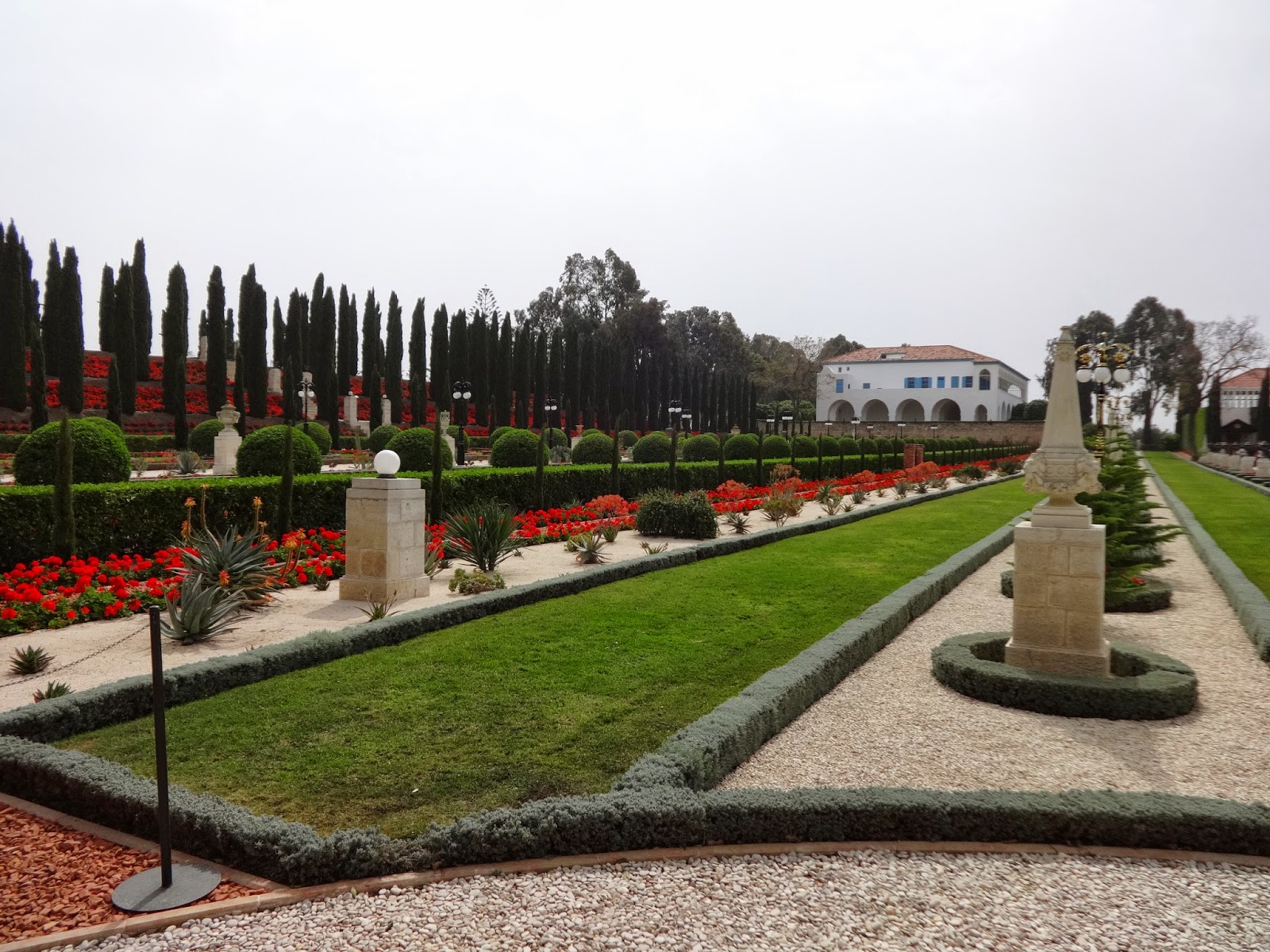 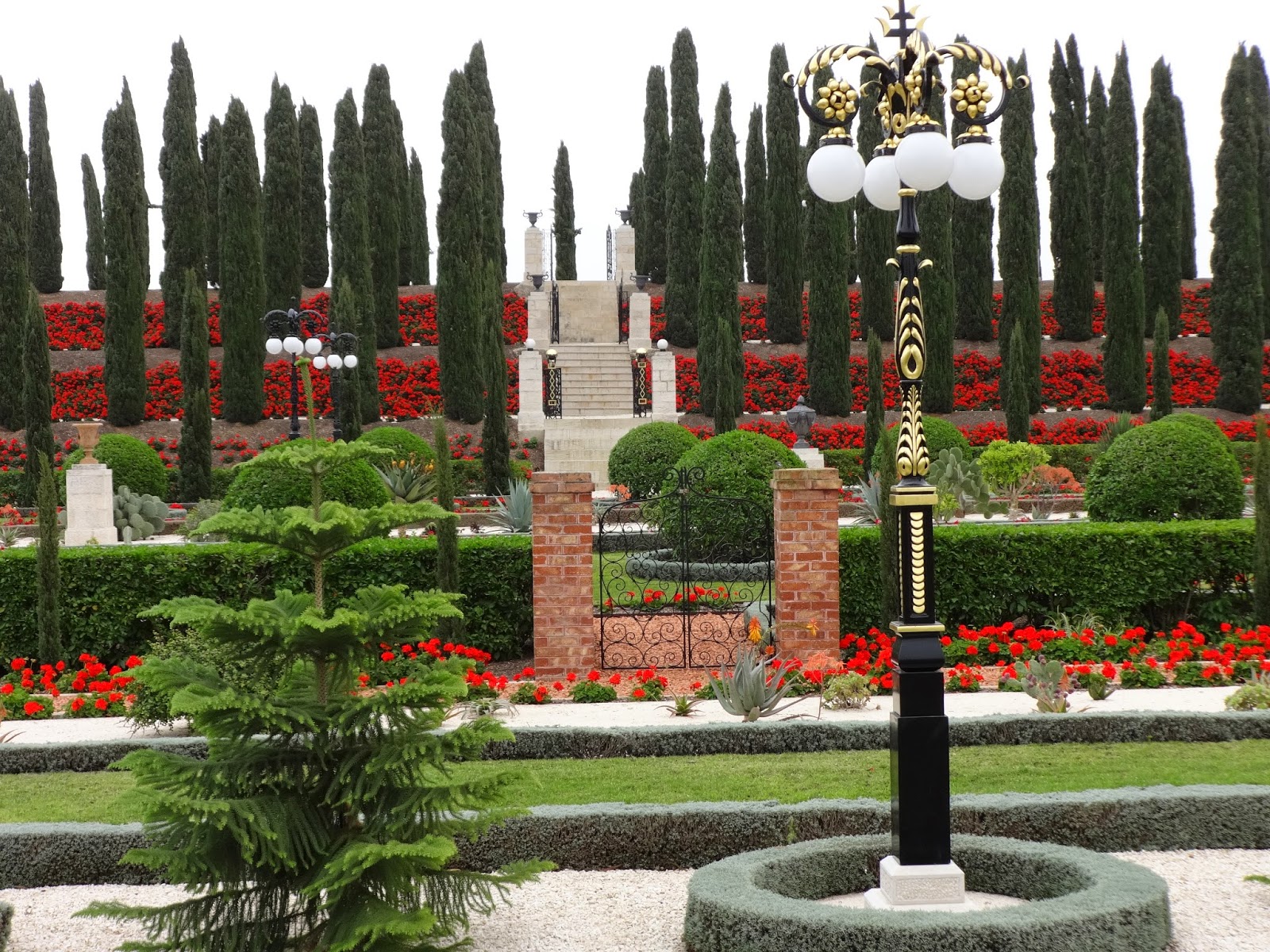 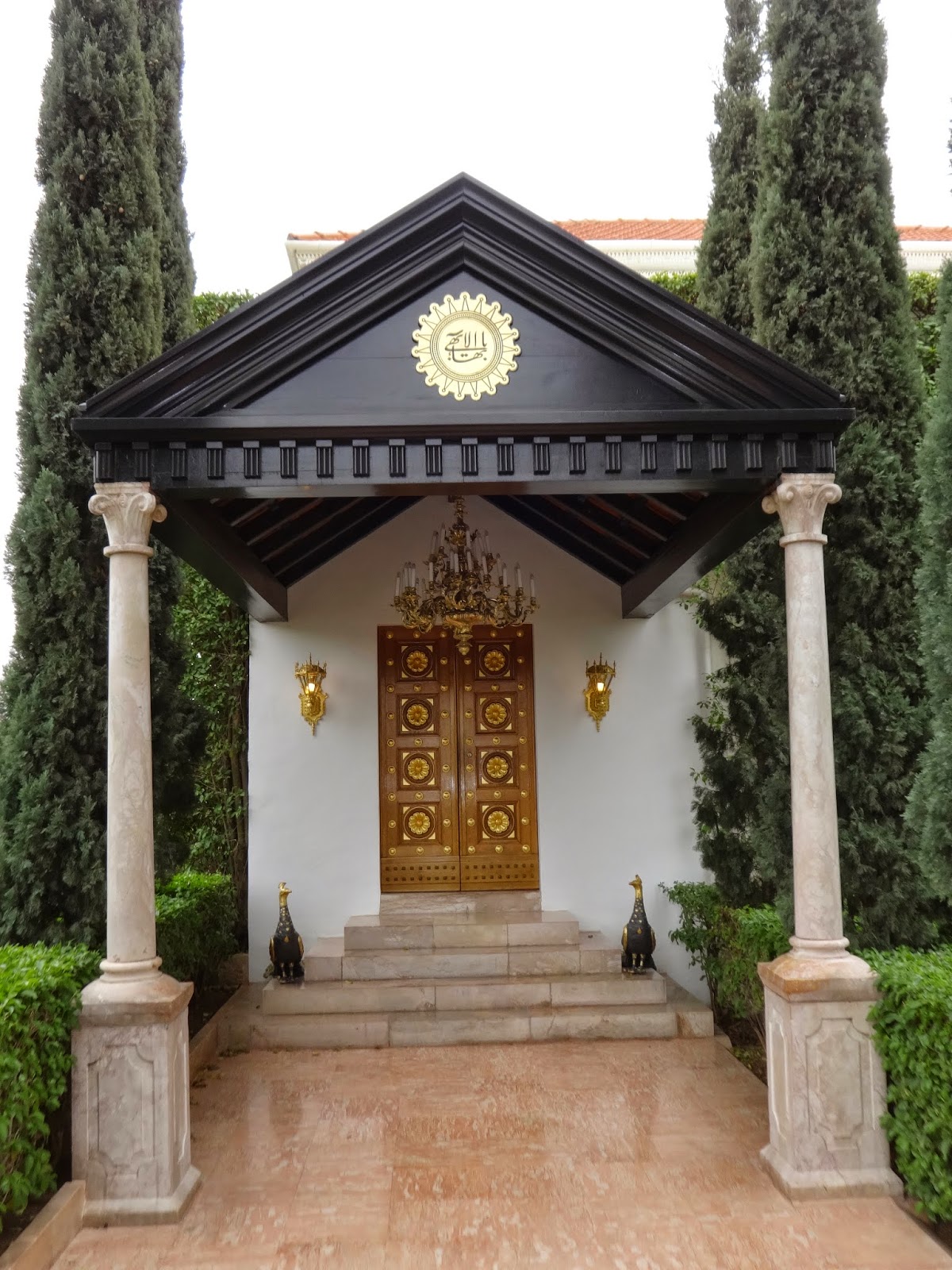 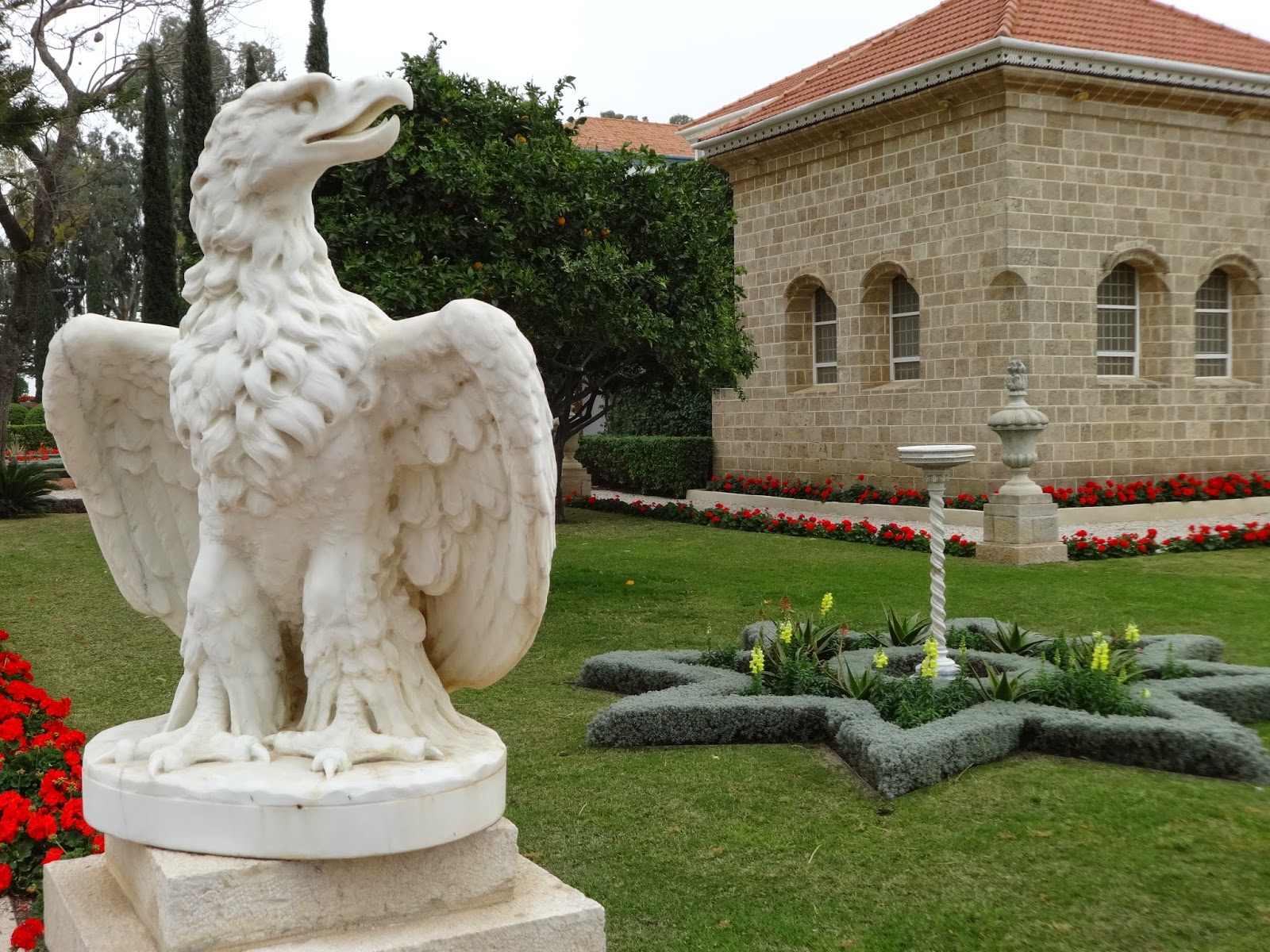 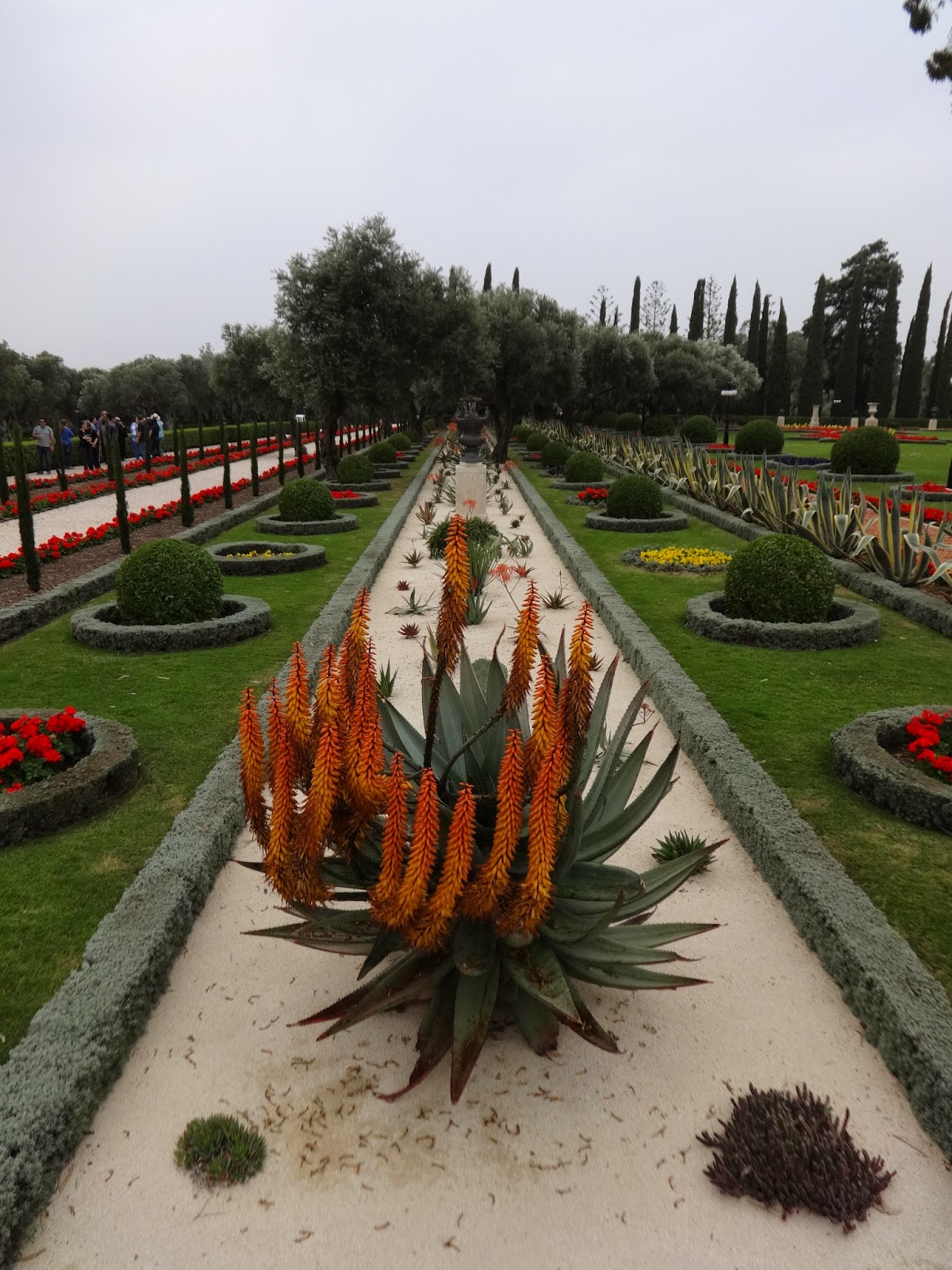 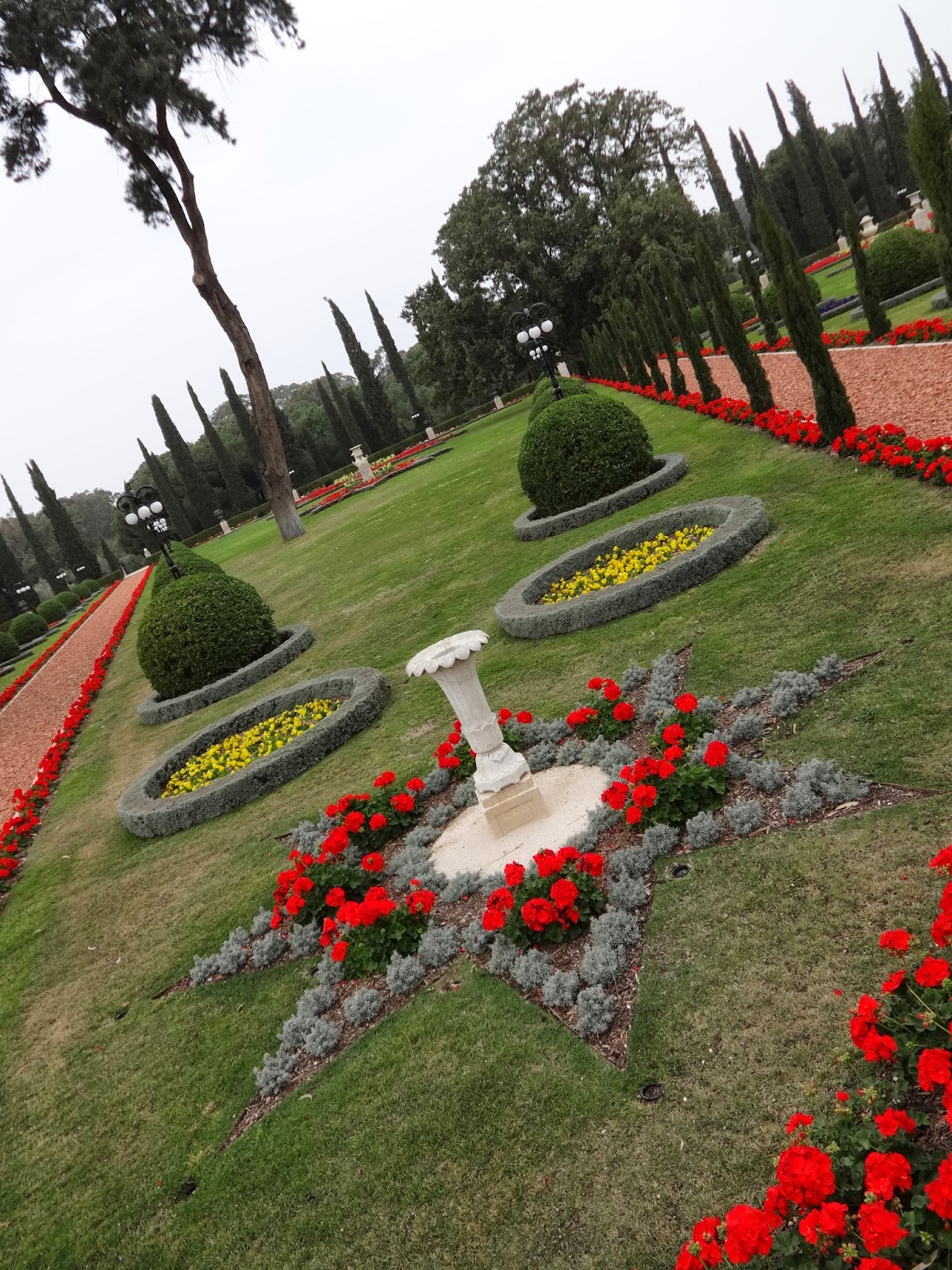 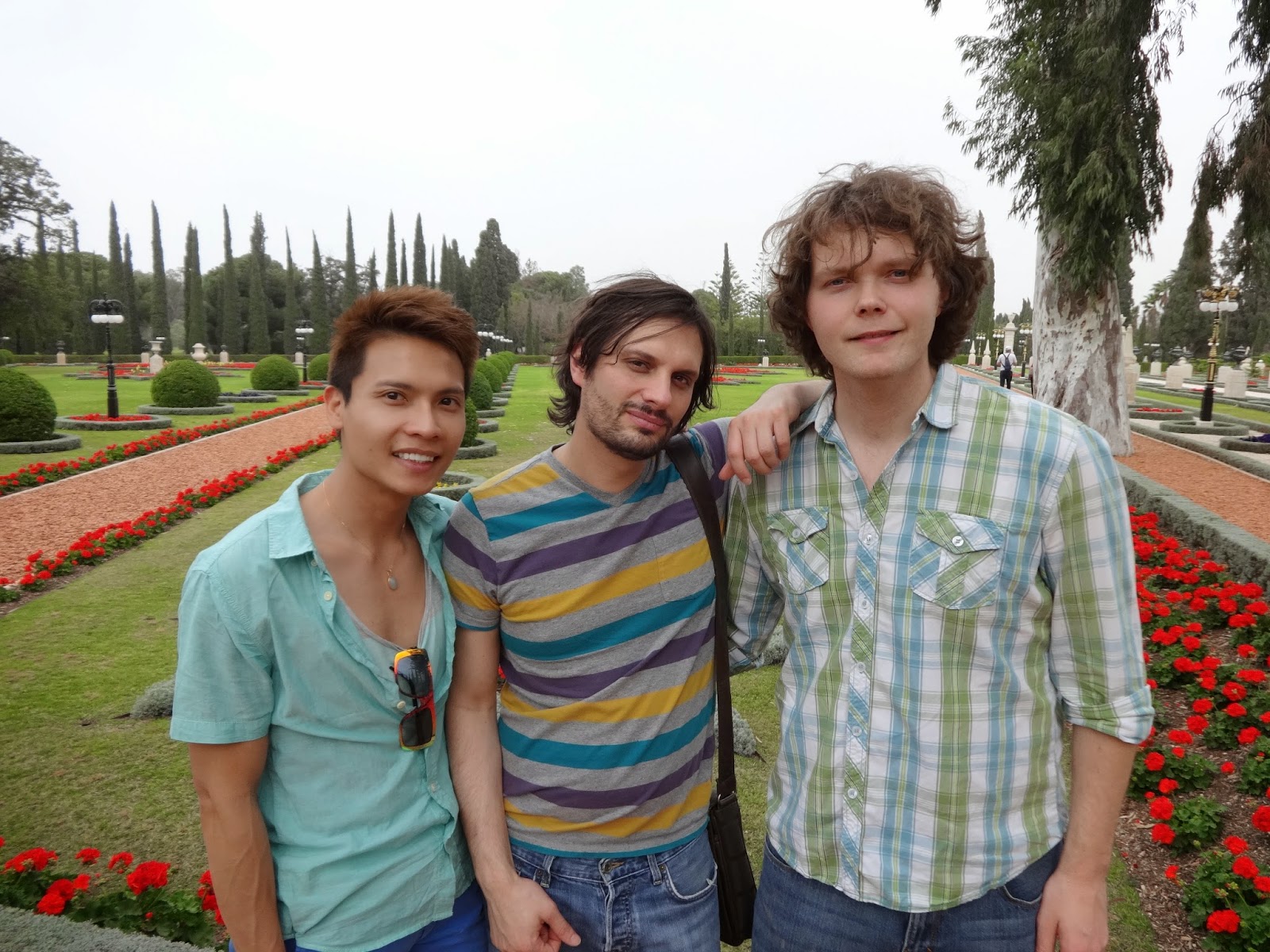 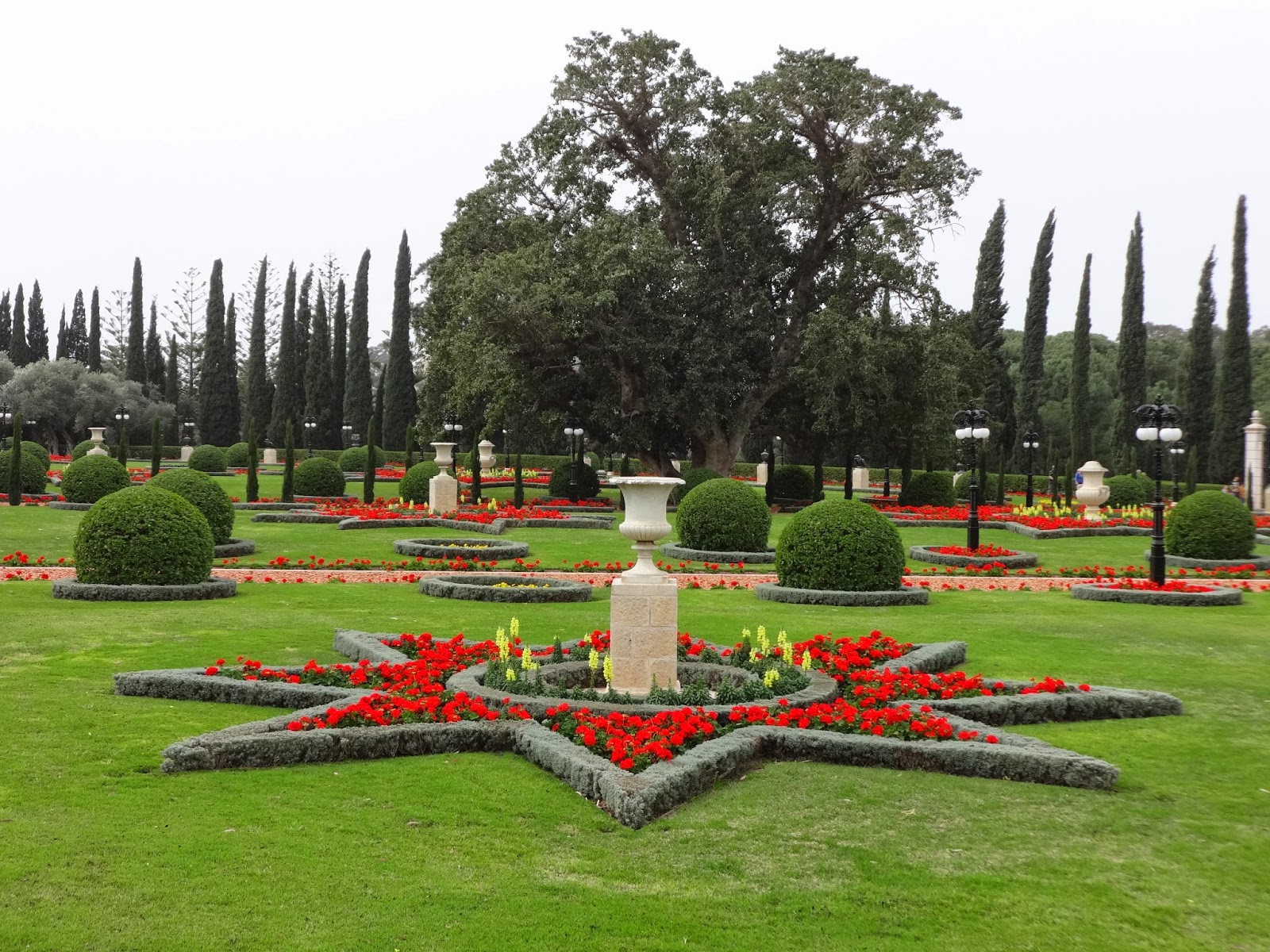 The Shrine of Bahá’u’lláh, which, like that of the Báb does not permit photography, is composed of a central area that contains a small, tree-filled garden surrounded by paths covered with Persian rugs.

The gardens in both Haifa and Akko were inscribed upon the list of UNESCO World Heritage Sites in 2008.

While conducting research for this blog post, I discovered that there is a third garden, located just outside of Akko.  Looks like I have another trip to make.
Posted by Aaron at 12:22 PM