Last Visitor of the Year

This past week we had the immense pleasure of hosting our friend and former roommate as he made his first ever trip to Washington, D.C.
In the eight months that we have lived in Falls Church, no fewer than eight visitors have graced us with their presence. While the itinerary for this trip wasn't much different than any of the others, the experience itself was completely different.
I'm the type that always feels the need to entertain company. I don't know how to relax when I'm on vacation, and I don't tolerate it in those that take a vacation to come visit me. I feel like I have completely failed in my duties as cruise director if we spend even one moment relaxing and watching television. And since nobody likes to go-go-go ALL the time, I often feel like I have failed my visitors, even when they have had a completely fabulous time.
This time was different, though, and I attribute that to the fact that we lived with Kris for almost 5 (or was it 6?) years...we've always spent a ton of time just relaxing on the couch and watching television. Don't get me wrong, I still went totally crazy and demanded that we go do stuff, but when nobody found that appealing, I found myself accepting the television as sufficient entertainment. And it was kinda nice. Because we have spent so much time just being around each other in the past, we were able to just be around each other now. When other people visit, we always feel the need to take them out to fun new restaurants and bars. With Kris, it was ok to just cook at home some nights. While we would otherwise feel obligated to visit museum after monument after museum, with Kris we were able to visit monument after shopping mall after museum after Target.
Don't get me wrong, I love it when my friends come to visit. I love showing people around. But your friends only see you the way that you want to portray yourself in public. With your friends, you always want to impress them. To show them how awesome life is. A roommate? A roommate sees you every which way. And a good roommate will stick around for 5 (or was it 6?) years despite that. And because you spend so much time with a roommate, you don't have to put on airs. You don't have to try so hard to impress him. You can just enjoy each other's company. 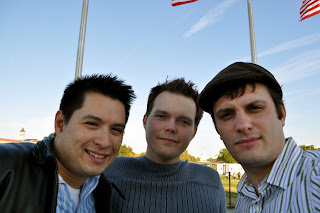