Located in the heart of the San Francisco Sierra in the state of Baja California Sur, the Painted Cave is one of the most important ceremonial centers featuring "cave art" in the North of Mexico...This composition, reproduced at almost full size, shows a fragment of this great wall painting.
This imagery, and the accompanying text, are the first thing to greet visitors of Mexico City's impressive, expansive, Anthropology Museum. 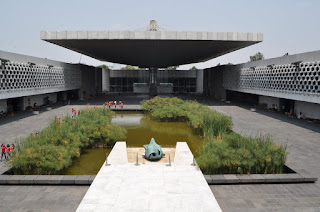 One barely finds himself scratching the surface of this sprawling collection before being hit by a dawning realization:

"Now I understand. I know why US Anthropology museums suck."
It's because the United States has very little anthropology to speak of.
From a purely scientific standpoint, Merriam-Webster defines anthropology as "the study of human beings and their ancestors through time and space and in relation to physical character, environmental and social relations, and culture." 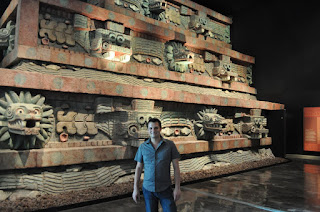 Look Familiar? How about now?
Okay. Great. But we as Americans don't identify with our Native American predecessors who were first to roam the land. We define ourselves by the colonial settlers who founded the United States of America. Our history begins in 1776. 1492 if we're going back to Columbus's arrival. That's only 235 years. 519, tops. And even then, humanity as it is now known had pretty much developed. America must look east, towards Europe, for it's anthropologic origins.

But Mexicans? They cast a much wider chronological net. Mexico was first populated over 13,000 years ago. Complex indigenous cultures were prevalent long before the Spaniards arrived. And although there is no argument that, as in the United States, a mixing of races occurred, Mexico managed to hold onto it's identity. The United States was born in Europe. Mexico was born in Mexico.
And because of this, one does not feel quite so detached when viewing these ancient artifacts. Because one understands that they are still pertinent to the people that live here.
The pottery. The hand-carved figurines. The reproductions of burial grounds and family housing. The native clothing. They are all relevant to the people of Mexico. Because chances are, their ancestors possessed these things. And, perhaps, painted the wall that opens this blog post.

In the United States, history museums are a fascinating look back at the origins of our independence, while anthropology museums are a quirky footnote in time. In Mexico, history and anthropology are forever linked.
Perhaps one day the US can say the same.
Or maybe not... 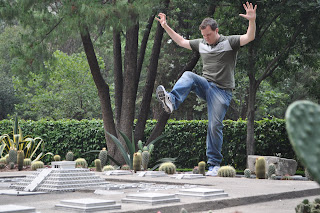