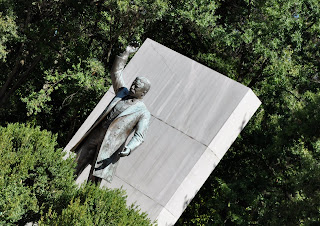 Teddy Roosevelt pretty much owned the other presidents when it came to getting a monument in his honor.
Lincoln got a statue of himself that sits inside a reproduction of the Athenian Parthenon. Jefferson copied Lincoln by getting a statue of himself housed inside a reproduction of the Roman Pantheon. Washington only got an obelisk.
FDR trumped them with his 7.5 acre piece of land containing several fountains and statues in his honor. But even he is in a distant 2nd Place.
Because Teddy got a statue. And an island.

View of Georgetown From the Island
Theodore Roosevelt, 26th President of the United Sates, was a dedicated conservationist. The 88.5 acre park is a fitting tribute to Roosevelt, who all but created the national park as we know it today.
During his time in office, Roosevelt signed legislation establishing no less than five national parks: Crater Lake, Wind Cave, Sullys Hill, Mesa Verde, and Platt. The Antiquities Act of June 8, 1906 enabled Roosevelt and his successors to proclaim historic landmarks, structures, and various objects of historic or scientific interest in federal ownership as national monuments. 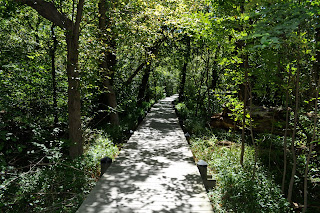 As we walked through the park today, I couldn't help but make the comparison to New York's Central Park. Although significantly larger in size (843 acres), Central Park shares a common goal with Roosevelt Island: to provide an escape from the city while not actually leaving the city. I think the island has more critters, though. 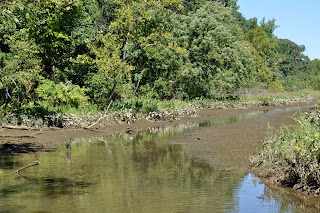