When TJ and I moved into our first apartment together, we went all out on the decorating. We painted the living room, dining room, kitchen, and hallway in warm autumn colors. We bought new couches, lamps, and a coffee table. My parents bought us the bookshelf that I had had my eye on for months. We adopted the first of two puppies that would eventually ruin all of these things. It was the perfect little apartment. We were going to live there until such a time as we could afford the down payment on a house.
That lasted for about a year and a half. Then the condo conversion craze hit Central Florida, and we were out on the street. We found another apartment in the area that we didn't like nearly as much as the first, and settled in for the next two years. We didn't paint this time. Nor did we complete our home makeover by purchasing the new bedroom furniture that we desperately needed. We had been disheartened by our break-up with the first apartment and didn't want to invest too much time or money in another one. We decided that we would wait until we were homeowners. Until we had a place to call home.
And so it came to pass that in February of 2008 we purchased our little house on the lake. Though in need of a touch up here and there, the house came pre-painted in a color scheme somewhat similar to that of our first apartment. We were in love. We moved in, eager to freshen up the paint and furnish our house with items that let people know it was "ours." We were ready to cultivate a style.
Then the economy tanked (in part due to the incredible failure of the aforementioned condo conversions). TJ was laid off in a series of budget cuts. We now had the house but were lacking the funds to fill it with stuff. That was fine. My income and TJ's severance package/unemployment were more than sufficient to keep up with our bills. It did not, however, leave much wiggle room to showcase any sense of style other than "did you bring that with you from college?" Why yes, as a matter of fact, we did.
Flash forward to today. TJ is gainfully employed. I have willingly left my place of employment to learn a foreign language. We are a couple that is blessed to have very few bills to consider in our monthly budget. In short, we are at a place in our lives where we could make that little yellow house in Orlando into almost anything we wanted it to be. But we don't live there anymore.
We live in temporary housing provided by the US Government. The apartment is completely furnished. The only hint of personal style is our new television (the one they provide is teeny tiny). Oakwood is fine for what it is. The beds are comfortable. Our apartment is spacious. All of our basic kitchen needs are met. It's just not our stuff. It's not what we would choose for ourselves. That's ok, though. It's meant to be temporary. We will be in Guadalajara soon enough. My only concern is that our home there will also be furnished, quite possibly with things that do not say "us." As we will be there for two years, I pray that we take the opportunity to redecorate...to put some Aaron and TJ into it. As Delia Deetz said in Beetlejuice, "If you do not let me gut out this house and make it my own, I will go insane, and I will take you with me!"
I have come to understand that home is what you make it. My home is with TJ and the kitty and the puppies, wherever that may be. That house in Orlando? That's home, too. But right now, it's somebody else's house. We may never live there again. I hope the new occupants consider it home, and are able to decorate it in a manner that suits them. I hope they feel comfortable doing so. We don't plan on turning it into a condo anytime soon.
Oh, and for any of you FSO's or EFM's out there that happen across this blog and are destined for Oakwood, here are a couple of shots of your home-to-be. 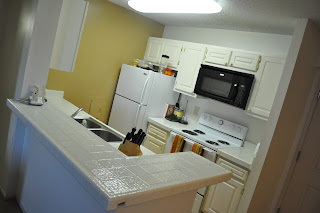 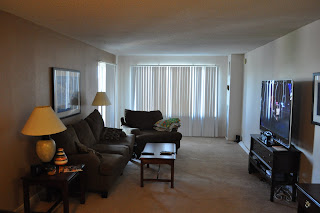 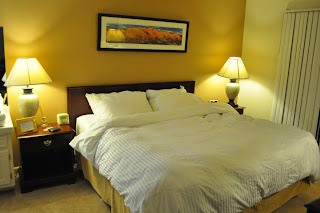 Not your style? Don't worry...they're remodeling.
Posted by Aaron at 7:34 PM