365 Challenge, Day 69: These Cupcakes Bring All The Boys To The Yard 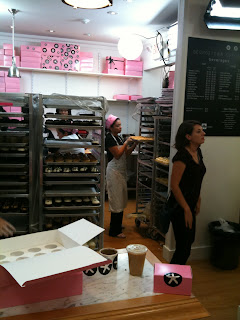 Sixty-nine days later, and I finally got my cupcakes. As I have previously stated,Georgetown Cupcake was one of our earliest discoveries in DC but has been practically unattainable since the premiere of their reality show, DC Cupcake. Personally, I've never seen the show, but I find myself completely inconvenienced by it. Lines are typically out the door and around the corner now because if something was on television, it MUST be superior to similar products, right?
Ok, so I haven't tried the similar products, so maybe TV cupcakes are better. And yeah, I once drove all the way to Savannah to eat at The Lady and Sons, so maybe I shouldn't be throwing rocks from the front porch of my glass house. 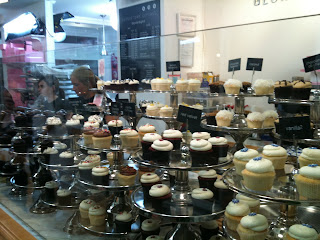 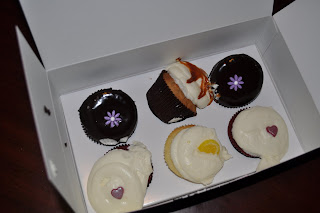 I only had my iPhone with me, so I took a couple of pics of the shop but made TJ wait until we got home to eat them so I could take pictures of our beautiful yum yums with the Nikon. Obviously, I could have been a little more tender with the box. Anyway, what you are looking at is two Red Velvets, one Lemon Blossom, one Caramel Apple, one Chocolate Ganache, and one more Chocolate Ganache that was supposed to be Cinnamon. Sigh. I guess in today's Tabloid-driven society, I should expect celebrities to make mistakes.
And now that I have made myself feel like a total piggy, I will bid you all a good night.
Posted by Aaron at 9:25 PM